The Twitter board have reportedly performed a u-turn to open direct talks with Elon Musk over his $43 billion offer for the company. It’s a significant reversal of position after the board not only declined to respond to Musk’s bid of $54.20 a share but passed a “poison pill” motion designed to thwart the world’s richest man from taking his 9% stake in the company to 15%.

The move meant other shareholders could be offered Twitter stock at a price lower than its market value if any other shareholder’s stake exceeded 14.9%. However, with official talks on a deal having now opened between Musk and the social media company’s board the Wall Street Journal has speculated a deal could be finalised by as soon as the end of this week. 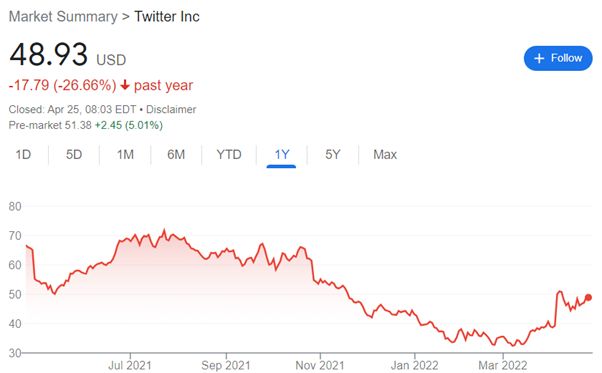 Discussions between the two parties are said to have commenced yesterday and while the Journal writes there are “issues to hash out”, an agreement suddenly seems more likely than at any point so far. One of the early details still to be agreed on is said to include the penalty Musk would be liable to meet if he fails to complete a deal.

After the initial response of the Twitter board, which was in effect to do absolutely nothing in response to Musk’s public offer for the company, the entrepreneur approached key shareholders in person late last week. While there is reportedly a lack of consensus over whether the Tesla boss’s “best and final offer” of $54.20 a share is enough, shareholders are reported to have expressed the position the board should at least engage in talks.

Even with after hours gains of around 5% factored into the current Twitter share price of $48.93, the company’s valuation is still some way short of Musk’s offer. That suggets markets don’t see this as a done deal yet despite talks. But pressure has been put on the board to convince shareholders it can deliver more value than Musk’s offer if it is turned down. Or to alternatively hold an auction for the company, inviting new bids. The company’s valuation is up 25% since his offer was made public.

With Twitter scheduled to report on its first-quarter earnings on Thursday the board, chaired by Bret Taylor, is expected to comment on Musk’s bid by then at the latest. His bid crystalised last week when he announced he had put $46.5 billion of financing in place to fund it. The cash has been put together through a combination of backing from a group of 12 investment banks, $21 billion from Musk through loans taken out against his stake in Tesla, which is worth over $1 trillion.

The Twitter board has come in for some heavy criticism for presiding over a drop in the company’s share price from $77 last February to just $32 ahead of the announcement Musk had built up a stake of a little over 9% since the turn of the year.

It initially looked as though Musk would accept the offer of a seat on the company’s board that was extended to him before he turned it down and verbally offered to buy the whole company.

Lauri Brunner, speaking on behalf of Thrivent Asset Management, which holds 0.4% of Twitter’s equity, is reported by the Wall Street Journal as commenting that Musk

“has an established track record at Tesla” and could be “the catalyst to deliver strong operating performance at Twitter”.