U.S. oil producers were last night forced to offer pay buyers to store their oil after running out of space, pushing official trading prices for West Texan Intermediate (WTI) below zero for the first time in history. After closing Friday at $18.27 a barrel, an improvement on recent lows, storage facilities filling up over the weekend saw the price of a barrel plunge by an incredible 306% yesterday to -$37.63.

Demand has fallen by over a third since the Covid-19 lockdown has frozen global economies. Supply also increased for a period as Saudi Arabia and Russia faced off over a supply cuts dispute and Mexico also stalled an agreement.

The energy consultancy Rystad’s Louise Dickenson told The Times that WTI’s historic drop into negative price territory last night was “epic in scale”. Storage issues have been discussed for the past few weeks but finally came home to roost yesterday. Producers have now, in no uncertain terms, been ordered by market forces to halt production.

By this morning, during afternoon trading in Asia, WTI had moved back above zero to trade at $1.43. By the time Asian hours trading started this morning the price per barrel was still firmly in negative territory at -$14.00. However, with demand unlikely to pick up significantly any time soon, some analysts believe negative prices could return. 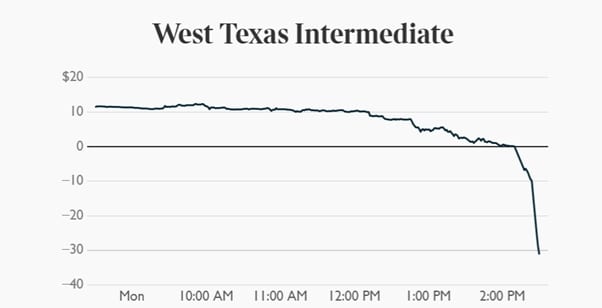 Warren Patterson, ING’s head of commodities strategy told the Financial Times “storage this time next month will be even more of an issue . . . so in the absence of a meaningful demand recovery, negative prices could return for June”.

In Cushing, Oklahoma, the oil trading hub where the U.S. benchmark is calculated, storage tanks were filling up at historically rates. The situation even drew comment from President Trump, who stated the federal government could both help relieve the glut while also taking advantage of attractive prices to top up national reserves:

“Based on the record low price of oil . . . We are filling up our national petroleum strategic reserves and we are looking to put as much as 75 million barrels into the reserves, that would top it out. We would get it for the right price.”

The WTI price that fell into negative numbers yesterday was for futures contracts for May delivery. This kind of contract, for the May period in question, ends today, which would be expected to push prices higher again. The WTI futures contract for June delivery was last night still in positive territory, with a barrel of oil trading at $20.43. It dropped 18% over the day.

Brent crude, which is the international oil price benchmark, making up close to 70% of the global market was yesterday down 8.9% to $25.57. It’s down 66% since early January.

Should Investors Be Turning Their Gaze To China Ahead Of A Shifting Global Balance Of Power?