Uber CEO Pledges Profitability By The End Of 2020

Uber’s reporting of its fourth quarter earnings yesterday included the now customary reveal of a massive loss – $1.1 billion racked up over three months. The Q4 loss was, however, a slight improvement on the $1.2 billion loss from the previous 3 months. And a big improvement on the spectacular $5.2 billion loss of Q2. Overall, Uber lost around $8.5 billion over the course of 2019.

Investors in Uber are intrinsically understanding. Otherwise they wouldn’t be investors in Uber. They know the big prize for the company is still several years away and comes in the form of driverless technology eventually cutting out the expense of drivers (70%-80% of revenues go to Uber drivers). But their patience has been very much stretched by the extent of Uber’s losses since the company went public in May.

Before Uber can capitalise on the far healthier margins driverless vehicles technology promises to bring, the company must maintain and continue to grow a dominant market share in today’s ride hailing and food delivery app sector. Without going bust. And that can only happen if the company can stem its huge losses – relatively quickly.

Now that it’s a public company, Uber can’t keep going back to capital markets to raise more debt or dilute the equity held by existing shareholders. It has to at least stop losses and preferably turn some kind of profit to see it through to the promised land of autonomous vehicles.

The company itself has taken the warning provided by markets, that has seen its share price slump since that May IPO. A pledge to drag Uber into profitability, on an adjusted basis, by the fourth quarter of 2020, a year ahead of the previous schedule, was yesterday announced by CEO Dara Khosrowshahi as he delivered the Q4 results. The result was an over 7% gain in Uber’s share price in afterhours trading. 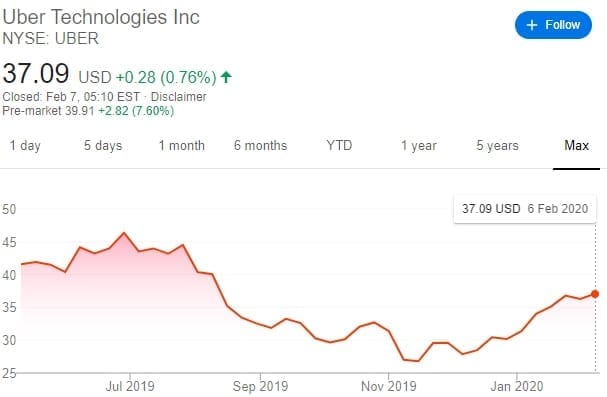 Otherwise, Uber’s revenue for the quarter came in at $4.1 billion – gain of 37% on the same period a year earlier. Gross bookings, which translates as total customer payments before driver payments or discounts, rose 28% to $18.1 billion. $243 million of the $1.1 billion loss was attributed to stock-based compensation payments. Funding growth of Uber Eats, the food delivery unit, was another major contributor to losses over the period.

Mr Khosrowshahi accompanied his announcement that he had challenged management and employees to achieve a small profit by the end of the year with the statement:

“We recognise that the era of growth at all costs is over. In a world where investors increasingly demand not just growth, but profitable growth, we are well-positioned to win through continuous innovation, excellent execution and the unrivaled scale of our global platform.”

Despite the strong afterhours gains yesterday adding the recovery the Uber share price has been undergoing since December, the stock still trades at around 13% under its IPO pricing of $45.