Ride-hailing app giant Uber is to cut its full-time workforce by around 17%, 3700 position, in a move to slash expenses after the Covid-19 pandemic lockdown decimated demand for taxis. The move mimics that of smaller rival Lyft who also recently said it would reduce staff numbers by 17%, adding up to just under 1000 jobs.

Uber is today due to report its first-quarter earnings and the timing of the announcement is likely intended to reassure investors decisive steps are being taken to re-adjust to a new reality. It can be presumed that first quarter figures including the start of the international pandemic-busting lockdown in March will show a significant drop-off in revenues compared to what would have been forecast a couple of short months ago.

The company, which is also a leading developer of driverless vehicles technology, said that job losses would most impact its full time “customer support and recruiting teams”. While the decision will see operating expenses fall, it is likely to amount to a bill of around $20 million in redundancy payments. A willingness to foot that bill indicates that Uber does not see demand for ride-hailing returning to pre-coronavirus levels anytime soon.

Uber chief executive Dara Khosrowshahi has also reportedly agreed to forgo his $1 million salary after talks with the company’s board. However, bonus payments Mr Khosrowshahi may be due have not been mentioned.

Founded in San Francisco in 2009, Uber is one of the highest profile examples of the cohort of ‘gig economy’ tech companies to rise from the ashes of the previous financial crisis. However, the company has struggled to justify the huge valuation it achieved when going public with a listing on the New York Stock Exchange almost exactly a year ago.

Stock market investors have proven less forgiving than Uber’s private backers on the company’s penchant for burning billions of dollars on aggressive expansion. Despite a recovery from the share price’s record low on March 20th, the company is still worth around 33% less than the price its shares debuted at in May 2019. While still in private hands, the last pre-public Uber investors bought shares at a level that valued the company at around $70 billion. It’s currently worth less than $50 billion. 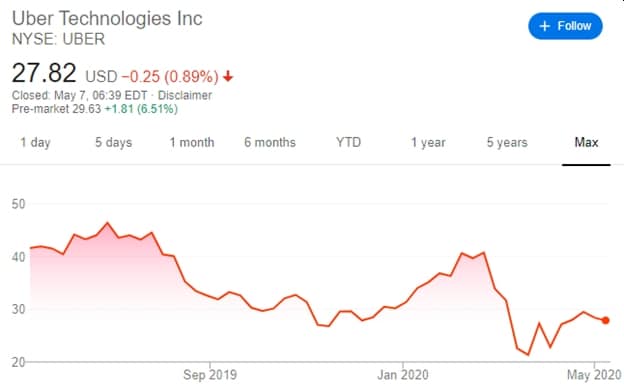 Stock market analysts believe the path ahead from Uber and competitors like Lyft now appears a tricky one. Wedbush Securities’ Daniel Ives comments:

“On the ride-sharing front, Uber and Lyft face Herculean-like challenges as the new reality will likely change the business models of these companies and competitors for the foreseeable future.”

He highlights health and hygiene concerns around using the same vehicles and drivers many others will have the same day as well as the fact more people working from home will generally see transport volumes decline.

While full-time Uber staff laid off will at least have the benefit of a redundancy package, the situation is bleaker for drivers, who have a contractor status and are paid based on the fares they collect, minus Uber’s cut. The company has around 3.9 million registered drivers, many of whom won’t have worked since lockdowns began.

One bright spot for both Uber and its drivers is that Uber Eats, the company’s food delivery app, is expected to have seen earnings improve during the lockdown period, with more people ordering meals to home. That could help balance the drop-off in ride-hailing and will have kept at least some of the company’s drivers busy.