The Uber share price gained 1.4% yesterday to extend a positive few days of trading for the ride hailing and food delivery app company which is expected to announce its first ever profitable quarter. The positive trajectory, which has reduced the share price slide for the year a little over 11%, comes despite the company announcing a new financial burden – it is to start offering pension benefits to all of its UK-based drivers.

Uber are, however, clearly at least slightly concerned the move may put it at a competitive disadvantage and have pressed competitors on the UK market including Ola, Bold and Addison Lee to do the same. The U.S. tech company is also proposing co-operation on an industry-wide pension benefits scheme for drivers. 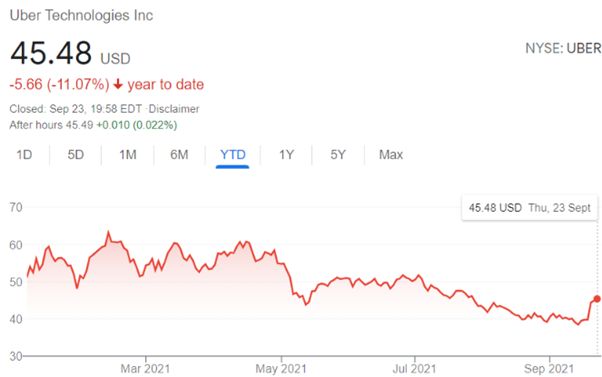 Uber will work with Now: Pensions, the workplace pensions platform and Adecco’s benefits administration service to operate the new initiative. It’s the first such scheme for ride-hailing app drivers.

All of Uber’s drivers will be automatically enrolled in the scheme, which will see them contribute 5% of any earnings over £120 a week, topped up by a further 3% from Uber. Like other workplace pension schemes, Uber drivers can choose to opt-out should they wish but will have to take the active step of doing so.

The new pensions scheme will be introduced by Uber on a city by city basis starting in Sheffield this month and concluding in November when London drivers will be included. Company contributions will be backdated to one of either May 2017 and the driver’s first Uber journey, depending on which was most recent. Uber’s move to offering drivers the kind of benefits previously denied gig-economy workers is a result of a February Supreme Court ruling that said they should be classified as employees, not contractors. It’s presumed the ruling will act as a precedent that forces Uber’s competitors to follow suit but most are currently holding out from doing so.

The move is complicated by the fact many Uber drivers also accept rides via other apps and will have to earn at least £120 through Uber to qualify for the pension contribution. That’s behind Uber’s suggestion for a pan-industry scheme that will see drivers accrue company contributions as a pot, regardless of which company a particular fare comes through. That would mean each company would pay a relative share of the employer contribution after total rides between companies passes £120.

The GMB union’s Max Rix commented that Uber’s announcement represents a “massive step in the right direction” and urged its competitors to follow without being forced to do so by court rulings.