The ride-hailing and food delivery app company Uber yesterday slammed the breaks on a sliding share price and threw the trend into reverse with an 11.5% surge in its valuation. Before yesterday a tough year had seen Uber’s valuation steadily in decline before the surprise announcement the technology company, which floated in May 2019 at an IPO valuation of around $75 billion, could be set to book its first ever profit.

Uber has been held up as the prime example of markets gone mad and valuing tech companies running up huge losses at tens of billions of dollars and yet to prove their often low margins business model is sustainable. 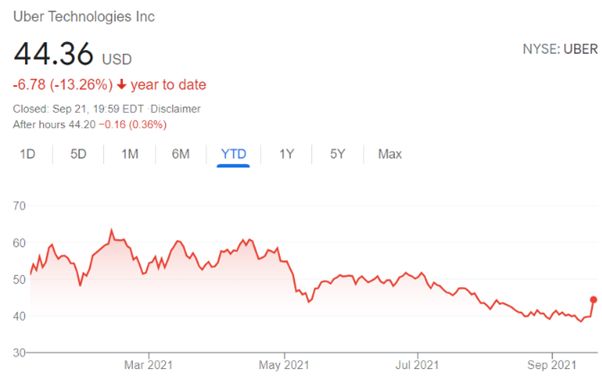 The argument has always been that ride-hailing and food delivery services need scale to be sustainable. And that losses over the early years, even if they stretch to a decade or more, is a necessary evil to achieve that scale through aggressive expansion. Uber has long asserted it could be immediately profitable if it were to stop investing in growth.

The Covid-19 pandemic has been a mixed bag for Uber. Lockdown and social distancing restrictions savaged demand for its ride-hailing app service – a gig-economy ‘disruptor’ of traditional taxi services. However, it was a boon for Uber Eats, its app-based food ordering service.

As demand for taxi rides bounces back as restrictions ease across most developed economies, and food deliveries demand stays strong having risen dramatically over the past year or so, Uber looks set to post its first profitable quarter. The statement was made ahead of markets opening yesterday, driving a dramatic gain in the share price value to $44.36.

Rival Lyft last month posted its own first adjusted quarterly profit three months before it had been expected to. Like Uber, its journey to profitability has been aided by the necessity to slash costs during the pandemic period. Uber had also offered forward guidance that suggested that profitability, on an adjusted basis, would be reached by the fourth quarter. That was yesterday also revised forward a quarter.

Uber now expects third-quarter adjusted ebitda, its preferred profitability metric, to achieve break-even from previous forward guidance for a $100 million loss. That’s been revised to a range of $50 million between a loss of $25 million or a profit of the same. Markets seem to think the likelihood is that the final figure will now show a marginal profit, which will go down as a milestone moment in the company’s evolution.

The company is forecasting gross bookings of between $22.8 billion and $23.2 billion in the third quarter compared with its previous estimate of $22 billion and $24 billion.

“They say that crisis breeds opportunity and that’s certainly been true of Uber during the last 18 months. Thanks to the team’s tireless work we’ve not only grown our global leadership across both mobility and delivery, we’ve done so more profitably than ever before.”

“As a result, Uber is reaching an important milestone. We also know we have much left to prove and need to execute flawlessly. We will rise to the occasion.”