IPOs in the UK have been lacklustre in 2022 and AIM has experienced a definite drought, with just seven IPOs year-to-date, the London Stock Exchange revealed

The second quarter of 2022 was the worst one for initial public offerings (IPOs) on the UK Alternative Investment Market (AIM) since 2009, according to research by UHY Hacker Young.

IPOs in the UK have been lacklustre in 2022 and AIM has experienced a definite drought, with just seven IPOs year-to-date, the London Stock Exchange revealed. Q2 proved especially bad, with just one float in the alternative space.

According to UHY Hacker Young, the last quarter to see such low levels of IPO activity was the first quarter of 2009, which also had just one IPO.

Colin Wright, UK group chair and partner at UHY Hacker Young, said that the similarities to 2009 end there, as ‘there has been no wave of companies quitting the market or going insolvent and we expect IPOs to quickly return once this period of instability subsides.’

Indeed, according to its data, just 49 companies have withdrawn from AIM so far this year, whereas 2008/9 had 257 retractions.

However, a full recession would change this, Wright said.

Indeed, while there were just 49 withdrawals so far this year there were only 50 in the whole of 2021. 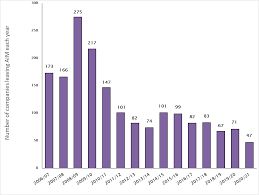 This lull in IPOs is a major step down from 2021’s figures, which was a bumper year for companies coming to market.

Back then, there were 16 IPOs in Q2 2021, raising £218m ($264.80m), and from January to July there were 35 IPOs on AIM, LSE data showed. In total, 120 companies listed on AIM last year, bolstered by the backlog of public offerings coming through after Covid delays.

Commenting on AIM and the state of IPOs this year, UHY Hacker Young said that enthusiasm for IPOs had been dampened by falling equity markets over the past few months, with the AIM All-Share index down roughly 26% year-to-date.

Wright said that in the face of this more challenging market, a lot of AIM IPOs have been shelved over the last few months’.

Interest rate rises have seen a lot of investors hit pause on their investment in growth shares and rotate into value shares instead, he explained.

Despite this, the accountancy group had some optimism, due mainly to the strength of the companies already on AIM.

It said that the lack of withdrawals compared to 2009 was a ‘sign of how much the quality of companies listed on the market (had) improved since the financial crisis’.

This leaves AIM in a good position to bounce back after the current period of uncertainty, it said.

Wright added: AIM is in a different place to where it was following the financial crisis. The overall standard of companies on the market is much higher and investors know this. AIM is in a very strong position to bounce back once the economic outlook brightens.