UK economy bounced back in May

Following a decline of 0.2% in April, GDP expanded by 0.5% for the month, which was greater than the flat growth that most economists had predicted

The UK economy bounced back in May after shrinking in April and March, figures from the Office for National Statistics (ONS) show. 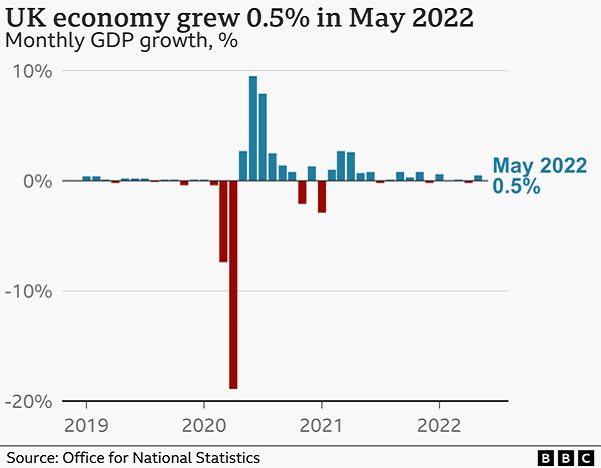 Following a decline of 0.2% in April, GDP expanded by 0.5% for the month, which was greater than the flat growth that most economists had predicted.

All main sectors contributed positively to growth in May, said Darren Morgan, ONS director for economic statistics. Health was the biggest driver with many more people seeing GPs, despite test and trace and the vaccination programmes winding down.

Road hauliers also had a busy month, while travel agencies fared well with pent up demand for summer holidays, he said. There was widespread growth across manufacturing after several tough months, while construction also fared well with housebuilding and office refurbishment driving growth.

Services grew by 0.4% and were the main contributor to growth between April and May. Human health and social work activities grew by 2.1%. Production grew by 0.9% as producer input prices rose to the highest levels since records began in January 1985.

Reacting to the GDP figures, the new chancellor Nadhim Zahawi said: It is always great to see the economy growing but I am not complacent. I know people are concerned so we are continuing to support families and economic growth.

We are working alongside the Bank of England to bear down on inflation and I am confident we can create a stronger economy for everyone across the UK, he said.

Despite the rebound, the markets remain cautious.

Paul Craig, portfolio manager at Quilter Investors, said that ‘today’s figures will not do much to the Bank of England’s thinking’.

It will press ahead with interest rate rises as it looks to combat inflation and be seen to be doing something on a problem that it has been slow to act on. While the underlying data for the economy is okay at the moment, these rate rises do have the potential to tip things the wrong way and create a recession, he said.

The outlook for the economy could change at the margins depending on the outcome of the Conservative leadership elections, given the varying views on tax cuts in the short term, said Dan Boardman-Weston, CEO and CIO at BRI Wealth Management.

He said: Whilst tax cuts would be a welcome break for the beleaguered consumer, it could cause inflation to remain sticky and the Bank of England to raise rates further than expected.