The FTSE 250 index, widely regarded as a bellwether for the domestic UK economy because unlike the constituents of the FTSE 100 the companies that comprise it earn a majority of revenues closer to home, has recovered to its pre-pandemic level. The index was boosted by yesterday’s announcement by Prime Minister Boris Johnson that shops and pub gardens will re-open in England from next.

A 1.2% gain for the day took it to 21,994.48 points, its strongest position since last February when the coronavirus sell-off saw it lose around 37% of its value by its March 20 bottom. The index has been gradually recovering since and after growth stalled last summer into early autumn, the FTSE 250 has gained almost a third since the start of November. 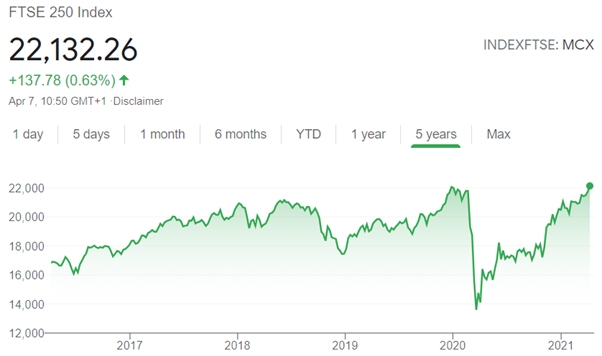 The announcement non-essential shops and pub gardens are re-opening proved a particular fillip for FTSE 250 constituents in the leisure and hospitality sectors. Drinks company C&C, which owns the Bulmers Cider and Tennent’s brands, gained 5.5% yesterday while cinemas operator Cineworld was up 6.4%. Foreign travel rules for the months ahead may not yet be clear but that didn’t stop optimistic investors from sending the share price of cruise operator Carnival up by 5%.

The most significant moment in the FTSE 250’s road to recovery from the coronavirus crisis sell-off was “Pfizer Monday” in early November when the prospect of vaccines boosted investor confidence. It also received a boost just before Christmas on the announcement of a Brexit deal having been reached with the European Union.

One reason why the FTSE 100’s recovery has lagged that of its domestically-focused sister index is the boost to the pound that also resulted from a Brexit deal finally being reached. Because the internationally-focused FTSE 100 companies earn a majority of revenues and profits internationally in other currencies, a stronger pound translates into less income when converted back into sterling. It also makes UK exports comparatively more expensive. Around three-quarters of FTSE 100 revenues are generated in international currencies.