Few in the UK have even heard of Arqit Quantum, the Nasdaq-listed satellites start-up that went public through a Spac-merger earlier this month. But the $3.4 billion-valued company has seen its share price more than double over the past month, which has resulted in a paper profit of about £100 million for the UK taxpayer. That’s thanks to an £8.5 million investment in Arqit made last year by the government-funded Future Fund.

Arqit’s share price gains also mean Arqit’s co-founders David Williams and David Bestwick are each sitting on paper of almost $1 billion. The start-up, which offers satellite-based cyber security solutions designed to protect the IT systems of companies and government bodies like the military, has still to generate meaningful revenues. Despite that, Arqit has surfed the zeitgeist wave of returns and risk-hungry investors keen on cybersecurity, space and tech investments to see its valuation soar. 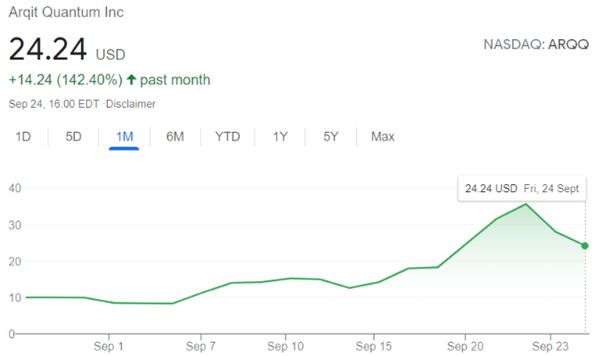 Co-founders Williams and Bestwick own 27% and 24% each of the company – stakes currently worth $920 million and $816 million respectively. It’s quite a turnaround for the entrepreneurs whose previous satellites start-up Avanti was taken over by creditors in 2017 after it failed to meet payments due to service heavy borrowing. Established in 2007, Avanti was briefly very popular with stock market investors before a 2016 sell-off wiped out its share price. It was de-listed by its new owners in 2019.

Avanti sells satellite-based internet services to mobile and internet operators, governments and businesses, to either provide coverage to remote areas or back up standard services to minimise potential downtime. Mr Williams says the idea for Arqit came from discussions with Avanti customers in the defence and intelligence services while the pair were still will the company.

The legacy encryption systems used to protect highly sensitive communication and data from would-be hackers are, says Williams, founded on public key infrastructure (PKI), and date back to the 1970s. However, that, says Williams, is quickly becoming a major problem:

“PKI is not fit for a hyper connected world and that’s why you’re seeing attacks against targets like the Colonial pipeline and big software companies.”

“It’s going to get worse. The computing power available to adversaries is only going to rise over the coming years.”

The next expected major technological leap is quantum computing, which will see new machines with processing power millions of times greater than the most advanced supercomputers built on traditional technology. When that happens, says Williams, PKI will become completely obsolete. The kind of encryption codes currently used will be deciphered with ease.

Arqit is offering a satellite-based solution to that ticking cybersecurity timebomb. The company has developed a new encryption system based on “symmetric encryption”, which sees devices communicate with each other using keys composed of thousands of digits.

Despite the complexity of those keys, keeping them really secure in a future age of quantum computing will involve making sure they are not intercepted by hackers in the first place. That is achieved by master keys being transmitted to data centres via satellite before individual codes are sent to devices. Sending master keys by satellite-based transmission is so secure, says Williams, because:

“Information captured in an individual particle of light cannot be stolen and broken.”

The Spac-listing saw Arqit raise $115 million which is double what Arqit had estimated it needs to develop its technology. The service currently relies on Earth-based networks but two satellites are planned for launch in 2023. Williams says contracts worth $130 million have already been signed with future customers including the UK government, BT and the European Space Agency. Another $975 million of contracts is, he says, in the pipeline.

Arqit expects to generate sales worth $14 million for a $6 million loss this year. However, the plan is to grow those revenues to $600 million by as soon as 2025 for earnings before interest, depreciation, tax and amortisation of $477. If the company succeeds, the UK taxpayer will be sitting on a much larger profit and the Future Fund will also have a much-needed success story.