Anglo-Dutch consumer goods giant Unilever has reclaimed the title of the London Stock Exchange’s most valuable company after a forecast-beating trading update yesterday sent its share price up 8%.

For years, Shell and BP have sat at the peak of the FTSE 100 but have fallen in value over recent months with their share prices smashed by the bottom falling out of oil prices. That has left Unilever and pharmaceuticals company Astrazeneca to fight it out for the title of top dog. Thanks to rocketing sales of bleach, soap and hand sanitizer over the coronavirus pandemic lockdown, Unilever has now edged ahead. 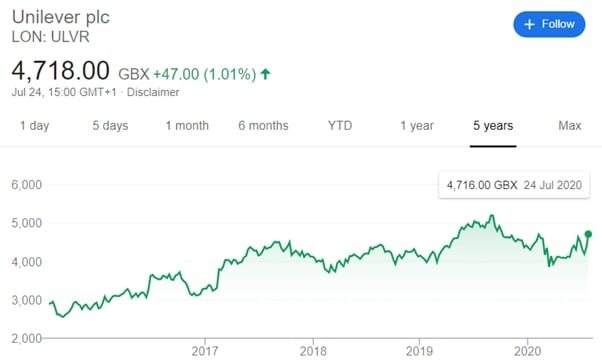 Despite sales in other products dropping, following an initial lockdown boom as everyone stocked up their kitchens and ate all their meals at home, that’s been largely compensated for by the boom in cleaning and hygiene product sales. City analysts had forecast a much larger drop in underlying sales over the three months to the end of June than the eventual figure of a slide of just -0.3%.

That saw the company’s share price jump by 7.9%, taking its market capitalisation to £122 billion yesterday, compared to Astrazeneca’s £115 billion.

Unilever also confirmed rumours that it plans to divest most of its assets in the tea market and hopes to raise at least £5 billion from the sale of brands including PG Tips. Unilever chief executive Alan Jope said “either an outright sale, or a partnership, or a demerger into a separate business and IPO” of the tea division is planned.

There is understood to be considerable interest in the stable of tea brands, that also includes Lipton, Brooke Bond and Pukka. German investment bankers JAB, who own the Douwe Egberts coffee brand are said to be interested, alongside private equity companies including KKR, Blackstone and CVC, among others.

Unilever has taken the decision against a backdrop of falling demand for traditional black tea. The UK market is still worth £667 million a year but is steadily declining as younger demographics prefer fruit and herbal alternatives or coffee.

Unilever was formed in 1929 through the merger of Lever Brothers and Margarine Unie. It employs 155,000 people across 100 countries and recorded revenues of €52 billion last year.

The company had been planning to move its headquarters to Rotterdam but backtracked last month to announce that it would instead simplify its structure by moving its base to London. The change of heart came as investors protested that the company exiting the FTSE 100 would force them to sell their stock.