The Unilever share price has further stabilised today with a 0.5% gain into mid-afternoon trading after losses of almost 11% wiped over £10 billion off the London-listed consumer goods giant on Monday and Tuesday. That drop in valuation came as a result of weekend reports that three failed bids were made last year for GlaxoSmithKline’s consumer health portfolio. The last, a combination of mainly cash topped up with shares to a value of around £50 billion was rejected on December 20.

Unilever’s response to the failed bids being made public had convinced investors that a new bid may well be in the offing, prompting a run on the company’s shares over the early part of the week. With investors making their position on a potentially higher new bid being submitted more than clear, Unilever has now said it will not be raising its last £50 billion offer. 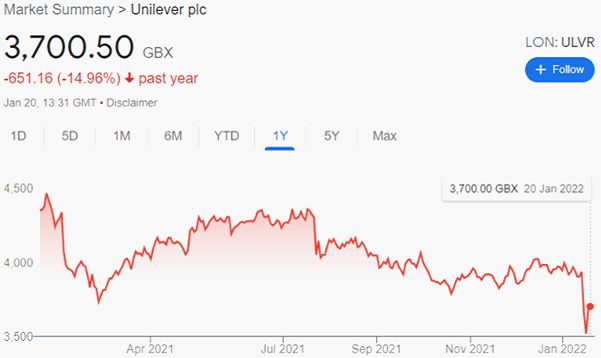 GSK and Pfizer, which owns a 32% stake in the joint venture consumer health business, are believed to want £55 billion to £60 billion to abandon plans to list the unit as a stand-alone public company this summer. In that context, Unilever’s announcement effectively amounts to confirmation it is abandoning its pursuit of the business.

After bowing to the unexpectedly strong investor backlash, Unilever explained its decision to not raise its bid as

“maintaining strict financial discipline to ensure that acquisitions create value for our shareholders.”

Despite disappointment he had failed to pull off an audacious swoop seen as “a strong strategic fit”, Unilever chief executive Alan Jope has reconfirmed a strategy that will see the company focus increasingly on health, beauty and hygiene products. It will also step up efforts to divest low-growth brands and will be expected to sell off food and drink products that match that description over the coming period.

Despite Jope being convinced the Glaxo portfolio of consumer health products that includes over-the-counter drugs like Panadol painkillers and the Aquafresh and Sensodyne toothpaste brands, would have been a successful strategic move, major investors didn’t agree. Concerns were raised over what it would have meant for Unilever’s debt profile, especially at the £60 billion level Pfizer is said to want to hold out for.

A deal would have added some blockbuster products to Unilever’s portfolio and the company’s strength in emerging markets, in contrast to GSK, offered potential for strong growth. Consumer health products also tend to suffer less from the more fickle changing of taste that can impact other consumer goods categories.

Unilever, which is facing investor pressure over its rate of growth and whose share price has lost over 30% since Jope took over as chief executive in 2019, may now turn its attention to other acquisition targets which could contribute to portfolio growth.