The Unilever share price is down 1.5% today and had at one point slid by over 3%, despite the FTSE 100 consumer goods giant handing €3 billion to shareholders. The announcement on the cash distribution was made as the company announced full year results that came in ahead of analysts’ forecasts. Unilever also assured investors no big acquisitions were planned after they had, said the company, made their opposition to a recent failed £50 billion bid for GSK’s consumer healthcare division “crystal clear”.

The fastest underlying sales growth for Unilever in 9 years, 4.5% compared to 4.3% expected by analysts, was boosted by 4.9% growth in the fourth quarter underpinned by price increases. Analysts had expected just 3.8%. Turnover for the year was also up 3.4% to €52.4 billion and underlying operating profits improved by 2.9% to €9.6 billion for an underlying operating margin of 18.4%. 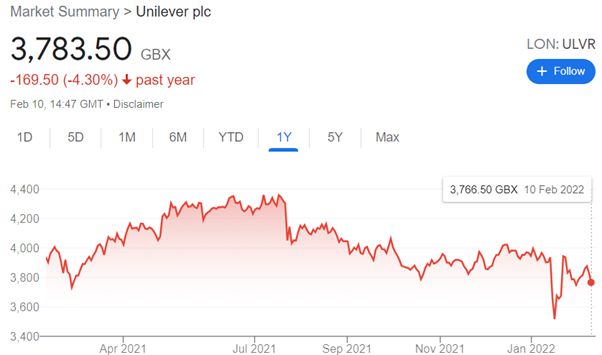 However, markets reacted negatively to a warning from chief financial officer Graeme Pitkethly that once-in-a-decade inflation levels which added €1.3 billion to costs last year would add €3.6 billion of extra costs this year. The biggest influences on the company’s costs are expected to be higher prices for crude oil, palm oil, soy beans and transportation. That will, said Pitkethly, lead to falling margins this year.

Margins are expected to drop to between 16% and 17% in 2022 compared to 18.4% last year. Two years ago Unilever made public a target for operating margins of 20%. Analysts were taken aback by the extent of the forecast margins squeeze and the lack of pricing power they imply.

The annual report was also used as a platform for Unilever chief executive Alan Jope to try to rebuild bridges with investors who reacted to news the company had bid £50 billion for GSK’s consumer health unit. The bid, made late last year, was rejected as the company both plans an IPO for the business later this year and felt the offer fell short. However, when news of the acquisition offer broke a couple of weeks ago Unilever’s share price slumped by around 10% to knock £10 billion off the company’s valuation.

“We have engaged extensively with our shareholders in recent weeks and received a strong message that the evolution of our portfolio needs to be measured. We therefore do not intend to pursue major acquisitions in the foreseeable future and will conduct a share buyback programme of up to €3 billion over the next two years.”

However, while Mr Pitkethly reinforced his boss’s assurance the company had clearly understood the lack of investor appetite for “transformational acquisitions” he defended the company after recent criticism from star stock picker Terry Smith, founder of Fundsmith and a significant investor in Unilever. Smith accused Unilever of having “lost the plot” over efforts to market Hellman’s mayonnaise in a way he suggested pointlessly pandered to “woke” culture. Pitkethly pointed to an 11% increase in sales of the mayonnaise brand since the launch of its campaign to raise awareness of food wastage.