Following its aborted, badly judged £50 billion move for GSK’s consumer health division, Unilever is to cut 1500 management positions at the consumer goods company in an effort to appease disgruntled investors. The FTSE 100 company, which employs 150,000 internationally, approximately 6000 based in the UK, announced today it will cut senior and junior manager roles by 15% and 5% respectively.

The redundancies will result from what Unilever described as a “reshuffle” of its current “matrix system” corporate structure. It will reorganise itself into five largely independent business groups: beauty and wellbeing, personal care, nutrition, home care and ice cream. 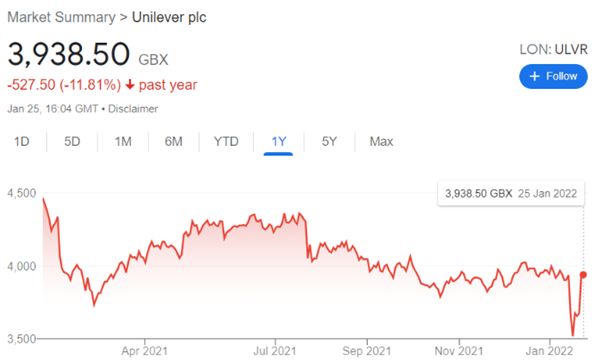 Despite an initial 0.64% slip in the Unilever share price, which last week plummeted by 10% last week before subsequently recovering the loss, finished today relatively flat as markets had a nonplussed reaction to the announcement.

Unilever’s current structure of three global divisions, across which steps were taken to de-layer management hierarchies, has been in place since 2019. The new five-division structure is, said the company,

“an attempt at bringing a new impetus, and thus an enhanced focus on underlying sales growth, rather than a source of significant savings”.

Fernando Fernandez, currently executive vice-president of Latin America is being promoted to president of the new beauty and wellbeing division and Fabian Garcia, who is president for North America will become president of personal care. Matt Close is to be president of ice cream rather than Executive Vice President of Global Ice Cream.

Jope, who is under pressure from investors just 2 years into his role, explained the reasoning behind the restructuring with:

“Moving to five category-focused business groups will enable us to be more responsive to consumer and channel trends, with crystal-clear accountability for delivery. Growth remains our top priority and these changes will underpin our pursuit of this.”

He was at pains to insist the changes are not a reaction to the recent stake in the company built up by the activist investor Nelson Peltz of Trian Fund Management, saying the new structure had been “developed over the last year and is designed to continue the step-up we are seeing in the performance of our business”.