Home Latest News Used up Your ISA Allowance? Invest in a VC Fund and Get a 30% Tax Refund
Latest News

Used up Your ISA Allowance? Invest in a VC Fund and Get a 30% Tax Refund

By now most UK investors and savers are familiar with the tax advantages that come with their annual ISA and SIPP allowance. The former means up to £20,000 a year saved in cash or investments benefits from no tax being subsequently due on returns and interest. SIPPs, with a £40,000 allowance, though that can go down to £10,000 if you are a high earner, offer similar protection to returns and also come with a 20% rebate on income tax paid. The bad news is the capital is tied up until you are at least 55.

There’s also another less well-known investment vehicle that comes with an even better 30% tax break – quoted Venture Capital Trusts (VCTs). To get the 30% tax rebate, however, the investment has to be made while the trust is raising capital, before it lists on the stock exchange. So how do these funds invest to deliver funds for their investors and just how risky are they? A recent interview in The Telegraph with Jo Oliver of Octopus Titan, the UK’s biggest VCT provides some valuable insight.

Tax breaks are given to VCT investors because the nature of this kind of trust is to invest early stage companies which are high risk by nature. AIM-listed companies are the other kind of company that VCTs are able to invest in but Octopus Titan specifically doesn’t. The trust’s mandate is early-stage growth companies that the trust’s specialists can get heavily involved in helping them with know-how and specialist skills as well as investment capital.

Octopus’s investments are in UK companies and the trust’s portfolio has a heavy weighting to tech start-ups that have the potential to disrupt the industries that are their target market. While UK-based, the companies Octopus Titan invests in often have global horizons. Because start-ups of the kind Octopus focuses on are intrinsically high risk investments, the trust’s strategy is to start with modest sums, adding further capital as key development milestones and targets are reached.

The trust’s approach seems to bearing fruit and it has outperformed its peers significantly over the past near decade since its 2009 launch. 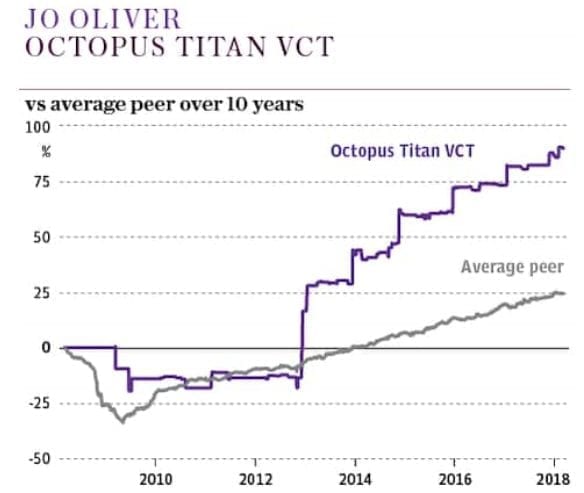 When judging a company’s potential, Oliver puts at least as much weight on the management team as the product itself. His most successful investment to date was in Zoopla, the online property platform. There were already 18 portals that could be considered as direct competition to Zoopla but the trust had faith in founder Alex Chesterman who had previously founded LoveFilm. The company turned out to become the first private holding to have reached a £1 billion valuation.

Another success has been Tails.com, a dog food subscription business that allows owners to order unique freshly made food tailor made to the particular dog’s age, breed, size and exercise levels. The company now sells more than 4 million bespoke dog meals and saw 90% growth in 2017.

However, 25% of Octopus Titan’s investments fail but because the strategy is to incrementally increase capital the failures account for only 14% of invested capital.

Octopus Titan’s current investment round will probably be open until the end of the tax year. Four of the other best VCTs open to UK investors are Northern, Unicorn AIM, Mobeus and Baronsmead.

Key Points of the Spring Budget Announcement and Will It Impact Your Investments?

SK Hynix shares jumped after the news before falling 2% due to valuation concerns... END_OF_DOCUMENT_TOKEN_TO_BE_REPLACED