Fund data company Morningstar says China funds attracted £77.5 million of capital in November. That’s the highest net inflow into equity funds focused on the world’s most populous country since January 2018, and is a sign investors have been encouraged by China’s rapid economic recovery from the Covid-19 pandemic.

November’s total was also not a one-off. The rally for Chinese equity funds began back in September, when net inflows of £41.2 million were attracted. It’s a reversal of fortunes from earlier in the year, when investors sold out of Chinese equities between February and August on worries over the economic impact the country’s strict lockdown measures would have. In May, a record £94.4 million was withdrawn.

The Morningstar figures cover funds that invest in companies listed on mainland China or Hong Kong stock exchanges, or companies focused on the Chinese market. 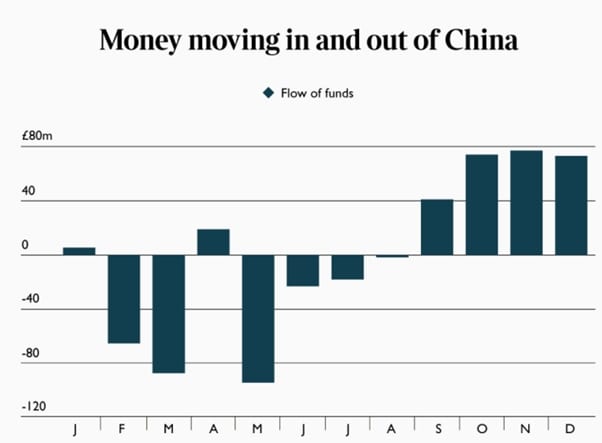 When China completely shut down and cut off travel in and out of Wuhan, the early centre of the pandemic, in January, the world watched on in trepidation. But once the rigid 76-day lockdown ended, it’s been full steam ahead for China. The country’s economy grew by almost 5% between July and September, according to its government’s figures released in October.

Since the summer, company activity has almost returned to normal, with around 90% of state-owned manufacturing facilities running again.

“China’s swift reaction to Covid has helped it to have the V-shaped recovery we were hoping for in the UK. Chinese technology companies such as Tencent and Alibaba have rallied on the back of all the time we’ve been spending online.”

In contrast to growing investor confidence in China, the opposite has been the case in the UK, where new lockdowns and travel bans have hit sentiment again. The UK’s FTSE 250 index is down around 8% for the year, and the FTSE 100 a little over 12%. Meanwhile, Shanghai’s CS! 300 index is up 21%, which is even better than the 14% gains achieved by the S&P 500.

“Whether you believe the figures coming out of China or not, they seem to have Covid more under control. The factories are booming, healthcare and technology are very strong sectors, and as long as investors are willing to overlook their record on human rights it’s a strong market.”

As a result China-focused equity funds have performed strongly. The Matthews China Small Companies Fund is up 69% for 2020, and the fund’s sector has averaged 30%. The fund’s focus on small caps does mean it’s considered relatively high risk, but it’s a strategy that has certainly paid off this year.

However, investors are cautious on the potential geo-political fallout of China’s approach to Hong Kong and the trade rows with Australia and the USA.