Consumers have driven a rise in demand for healthier, more sustainable vegan (increasingly rebranded as ‘plant-based’) alternatives to traditional foods containing meat or other animal-based ingredients. Investors have also spotted the favourable market trend and are increasingly backing vegan brands.

But now, some of those private vegan companies are going public. Beyond Meat, which sells plant-based vegan burgers and sausages was the first big vegan IPO when it listed on the Nasdaq in May 2019. 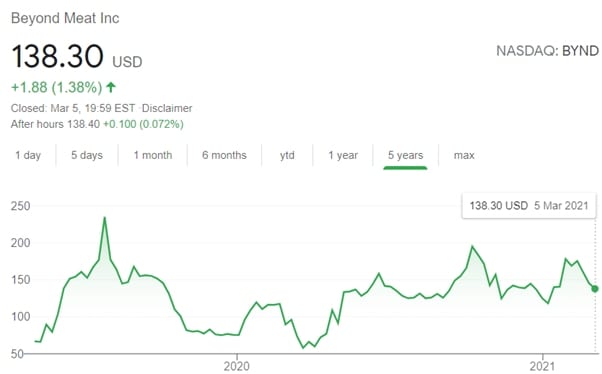 The almost 2-years since have been a rocky ride for investors. Huge initial gains saw the company’s valuation multiple several times over on its IPO price before the March 2020 coronavirus sell-off saw most of those gains wiped out. But a quick recovery since sees Beyond Meat valued at $8.7 billion.

With the company valued at just $1.5 billion by its IPO, that represents a remarkable return for investors who bought in at that point or shortly after the shares started trading openly on the Nasdaq. From their IPO pricing, Beyond Meat’s shares have gained 480% in under two years. And they are up 107% on the $66.79 they started to trade at.

Beyond Meat and its peers in the plant-based protein space are certainly well-placed to take advantage of a positive market trend. Consumer demand for plant-based vegan protein alternatives is growing quickly. 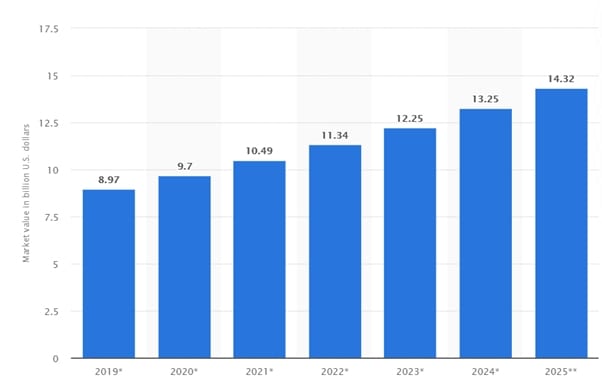 Despite a growing market are vegan investment valuations stretched to ‘bubble’ territory?

Many, probably most, analysts agree that as a vegan investment Beyond Meat looks expensive. It is something like the Tesla of the food products industry in that it is worth much more than established rivals with far larger revenues and profits. For example, a recent Forbes article compares Beyond Meat to Kellogg:

The case against Beyond Meat as a vegan investment

By 2025, Statista estimates the value of the global plant-based proteins market to have reached $14.3 billion. Beyond Meat estimates the global animal protein market to be worth $1.4 trillion. If we consider the animal protein market as the opportunity for plant-based vegan alternatives, that leaves a huge amount of market share that can still be taken by Beyond Meat and vegan-protein peers.

Presumably, that’s what Beyond Meat shareholders are relying on. They are willing to pay a premium compared to the company’s fundamentals today because they see a huge amount of upside available to the company over future years. Much like how Tesla shareholders are betting on the company dominating the future electric-only automobiles market at the expense of traditional rivals that have much larger market share today.

But the trend towards vegan proteins replacing a greater share of animal proteins is still young. And that entails the risk the trend could quickly change direction. One significant development that could limit future demand for vegan protein products is lab-cultured animal protein cells. Heavily funded start-ups are working on commercially viable meat products that don’t involve slaughter. Singapore just became the first territory to approve lab-cultured meat for commercial sale.

For now, the cost of cultured meat alternatives is still prohibitively high for companies in the space to represent serious competition to Beyond Meat and other vegan-protein alternatives. But that will change over time and illustrates how the industry trend is far from set in stone. The premium currently attached to Beyond Meat is a pretty big one in the context of that lack of certainty over how the market will develop and mature.

Another threat to vegan investments like Beyond Meat is future commoditisation of their product categories. For now, the biggest vegan protein companies have a ‘first movers’ advantage. Beyond Meat and competitors such as Impossible Foods invested significant sums of venture capital into the food science that resulted in plant-based burgers and sausages that can pass for the real thing. And these faux meat alternatives will only improve with time and competition.

But there’s a reason why consumer goods companies are not traditionally valued at multiples anywhere near those being assigned to Beyond Meat. Brand only goes so far when it comes to how much market share can be cornered for particular foods when there is competition of comparable quality.

As Amazon found Jeff Bezos famously said “your margin is my opportunity”. Impossible Foods has already dropped its prices by 20% recently, which some analysts see as the beginning of a price war between vegan protein brands. And more competition is entering the market, including from the traditional industry giants. Commoditisation of plant-based protein is a threat to the kind of margins Beyond Meat and its peers need to maintain to sustainably justify lofty-looking valuations for an extended period.

The case for Beyond Meat as a vegan investment

But does the above critique of valuation miss important strengths of vegan investments like Beyond Meat? Its management actively wants to cut prices. In fact, getting the price of its plant-based protein products below animal protein alternatives by 2024 is the company’s stated target.

And gross margins won’t suffer if production costs are proportionately brought down alongside prices. So far the company’s gross margins have held up well

Management doesn’t conceal its desire to cut prices; it intends to get the price of at least one product below the price of animal protein by 2024. When you cut prices, gross margins suffer — unless, that is, you proportionately lower your cost of production.  Beyond Meat’s gross margins have so far held up well with price cuts made to date – maintained at between 26% and 30%.

Trailing-12-month-revenue is still under $0.5 billion, which leaves plenty of room for Beyond Meat to grow its sales. And there is plenty of potential upside in future developments such as new products being developed, new restaurant partners and even diversification into new product categories like plant-based chicken alternatives. When prices do drop below animal-based protein, sales could well surge.

At its current valuation, Beyond Meat certainly represents a risky vegan investment. But certainly not one doomed to failure.

In February, the Blackstone-backed Swedish vegan dairy products alternatives company Oatly announced it had filed for an IPO with the U.S. Securities and Exchanges Commission. It is reportedly targeting a valuation of around $10 billion, which would see it immediately worth more than Beyond Meat.

Less than a year ago, a private funding round led by Blackstone and including celebrity investors Oprah Winfrey and Jay-Z through his Roc Nation company, valued Oatly at around $2 billion.

In 2019, Oatly’s revenues were about $200 million, representing around 100% growth on 2018. The 2020 target was to double sales again to $400 million. There are currently no public figures on whether that was achieved but it could quite feasibly have been beaten with the company hinting that 2020 proved to be a breakout year for its own sales and the plant-based dairy alternatives market generally. Market researchers SPINs say the value of the U.S. market for non-dairy milks grew 23% to an estimated $2.2 billion.

With Beyond Meat’s net revenues for 2020 $406.8 million, representing 36.6% year-on-year growth. Oatly’s gross margins are reportedly around 40%, so superior to those of Beyond Meat. If Beyond Meat’s current valuation is a benchmark a $10 billion IPO valuation for Oatly should not only be achievable but also leave space for some good upside for retail investors buying shares post-IPO.

But the bigger question anyone on the hunt for vegan investments should consider is if these lofty valuations represent a bubble? Or simply reflect a quickly growing market with huge upside potential?