Vietnam – Why This ‘Communist’ Country Is Lighting Up on Investors’ Radar

If there was any surer sign that Vietnam, the southeast Asian nation that has until recently been a relative international backwater, has enjoyed a strong recent upturn in its economic fortunes, it was that the country recently drew the ire of President Donal Trump.

In July this year, Trump moved on from one of his now habitual rants on China’s perceived exploitation of uneven trade tariffs by rounding on Vietnam. He called the country “one of the worst abusers” of the new tariffs he has imposed on Chinese imports into the USA – irked by US companies routing imports through the country, or moving production facilities there, to avoid high levies imposed on China.

But Vietnam is no longer just a low-cost manufacturing hub churning out cheap goods and clothing. It’s also quickly becoming a high-tech production hot spot. Tech giants including Google, Nintendo and now Apple have all recently announced their intentions to move part of their manufacturing to Vietnam. Goertek, the China-based manufacturer that makes Apple’s Airpods, confirmed in July that it will relocate production to Vietnam as a refuge from the escalating trade war between Washington and Beijing.

But tech giants on the hunt for new manufacturing facilities not subject to Chinese export tariffs are not the only ones, or the first, to have gotten wind of Vietnam’s rapid rise. Vietnam is not represented in the MSCI Emerging Markets index, the leading international emerging markets investment vehicle that is followed by around $2 trillion of global capital. But that has not prevented one in five emerging markets funds now investing in Vietnam’s public companies, according to data provided by Copley Fund Research, emerging markets positioning and fund performance specialists, which analysed 193 open-ended EM funds from different parts of the world. 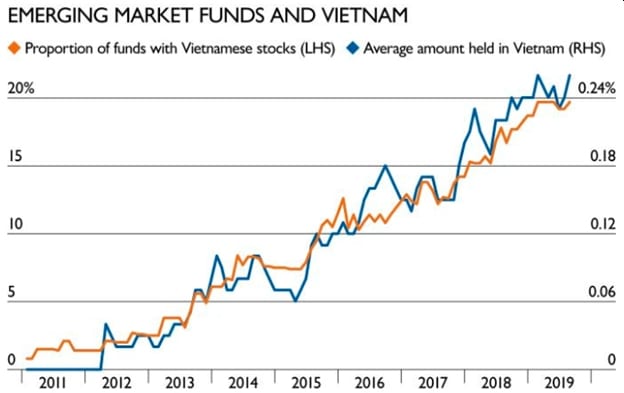 The funds analysed have a total of more than £1 trillion under their management. Over the five years between 2014 and 2019 the number of emerging markets funds invested in Vietnamese companies saw almost 150% growth from 8% to 19.7%. One in five fund managers has ventured into this quickly emerging ‘frontier’ market. Professional stock pickers are well and truly alive to the potential bubbling in Vietnam.

“Vietnam has seen an influx of companies using the country as their base for exports. There’s a possibility it will be upgraded to emerging market status at some point.”

But Vietnam’s vibrant economy is not purely founded on its newfound status as a high tech manufacturing hub. Internal consumer spending is also driving GDP growth. The country’s young, urban population has seen its expendable income quickly grow and is spending it on consumer goods and electronics such as smartphones and laptops.

The combination last year saw its economy grow faster than southeast Asian neighbours Thailand, Malaysia, the Philippines and Indonesia by adding just shy of 7% to GDP. Since 2016, the Ho Chi Minh stock market has been on a tear. While still off its 2018 high, it is still up nearly 75% since January 2016 and shows little sign of slowing down. 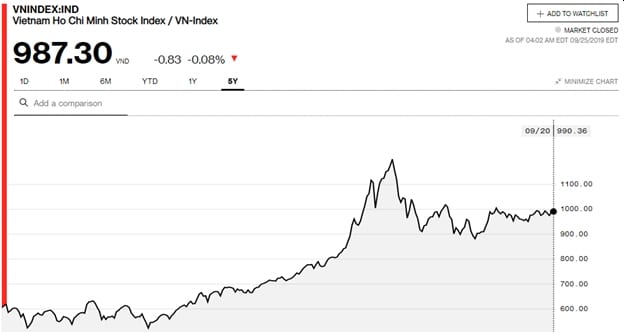 Dzmitry Lipski, an analyst with the stockbroker Interactive Investor, commented for The Times in September:

“The Vietnam growth story has been bolstered by the spillover from the US-China trade dispute as it picks up business from its northern neighbour. The trade dispute looks set to accelerate, so even if there is a deal within the next year, both US and Chinese companies may think hard about how to shield their business from the fallout.”

Vietnamese start-ups and even more established companies are also pulling in record investment, with most of the capital foreign direct investment from international sources. The Asian Venture Capital Journal reports $128 million invested across 24 deals over the first half of 2019 compared to just 6 transactions worth $12 million over the same 6 months in 2018. The sums may not yet be comparable with those in Silicon Valley but the rate of growth is breakneck.

One of the most notable investment rounds in recent months has been closed by ride-sharing app FastGo, a competitor of Grab, the region’s dominant force after Uber retreated from southeast Asia in 2018, selling its business to its rival in the process. Other are logistics company Abivin and Logivan, which has similarities with Uber Freight. Vietnam also now has its first ‘unicorn’, the gaming and media company VNG, which was most recently valued at $2.2 billion in a funding round led by Temasek, the Singaporean wealth fund.. Its co-founder and CEO Le Hong Ming states in the Financial Times:

“When we started 15 years ago, we were one of the few [private, start-up] companies. Now there are hundreds and hundreds.”

When regulatory issues can be overcome, VNG plans a Nasdaq listing after signing an agreement with the exchange in 2017. And VNG should soon have company in the Vietnamese branch of the unicorns’ club. DealStreetAsia reported in the summer that mobile and digital payments start-up VNPay is set to attract a $300 million investment from SoftBank’s Vision Fund and GIC of Singapore. VinaCapital Ventures is a $100 venture capital vehicle dedicated to Vietnam. Its portfolio includes stakes in Logivan, FastGo, and Wee Digital, a biometric and facial recognition company.

Many of Vietnam’s most promising start-ups have been founded by members of the Vietnamese diaspora who have worked and studied abroad before returning home. As explained by Justin Nguyen, who runs Monk’s Hill Ventures:

“Vietnam has reverse brain drain. In a lot of countries, the best and brightest go to school abroad and stay there. We have people returning from the US who went to school there, or people like me who left as children, bringing back the rich experience from abroad.”

Investing In Vietnam – The Options

So what are the options for investors interested in taking exposure to this promising market? Unless you are lucky enough to have the level of wealth necessary to get involved in private equity or venture capital funds, the options are emerging markets funds with holdings in Vietnamese companies. As of yet there is no fund that is completely dedicated to Vietnam.

Fund options include Skagen Kon-Tiki, which has 2.5% of its total assets invested in Vietnam, adding up to $49.4m at the time of Copley Fund Research’s analysis. It has returned an average of 5.6% over the past decade, trailing the 6.8% returned by the benchmark MSCI Emerging Markets index.

There are also a number of stock exchange-listed closed-ended investment trusts active in Vietnam. The BlackRock Frontiers investment trust has Vincom Retail, a shopping centre operator, as its second-biggest holding, at 3.2% of the fund. The fund also holds shares in the smartphone and gadget retailer Mobile World Investment Corporation, which has performed well.

As well as its VC fund, VinaCapital also runs the Vietnam Opportunity trust, which focuses on consumer stocks and counts the country’s biggest dairy company, Vinamilk, and the jeweller Phu Nhuan among its investments.

Of course, at this stage of its development, investments in Vietnam should still be considered risky. There is a huge potential in the country’s economy and it is quickly moving in the right direction. But frontier markets have a history of quick changes of economic fortune, especially when a major political change takes place or there is an international slowdown. But for investors, a small stake in Vietnam’s future, particularly as part of an investment in a broader Southeast Asian fund, could be a long term position worthy of consideration.

That the international travel sector is, thanks to the Covid-19 pandemic, in a bit... END_OF_DOCUMENT_TOKEN_TO_BE_REPLACED

With a growing number of economists arguing there is a high chance we are... END_OF_DOCUMENT_TOKEN_TO_BE_REPLACED

While most still caveat the argument with the get-out clause it is far from... END_OF_DOCUMENT_TOKEN_TO_BE_REPLACED

Natural gas prices have rocketed with Russia accused of managing supply to drive up... END_OF_DOCUMENT_TOKEN_TO_BE_REPLACED

After their valuations boomed in 2020, the UK’s online fast-fashion giants of Asos and... END_OF_DOCUMENT_TOKEN_TO_BE_REPLACED