The Virgin Galactic share price has turned around a recent slump to gain over 27% in after hours trading on news founder Sir Richard Branson will travel to the edge of space by the end of this month. In fact, Branson could lift off aboard Virgin Galactic’s VSS Unity rocketship, alongside two pilots and another 4 passengers, as soon as July 11th, weather and technical checks permitting. 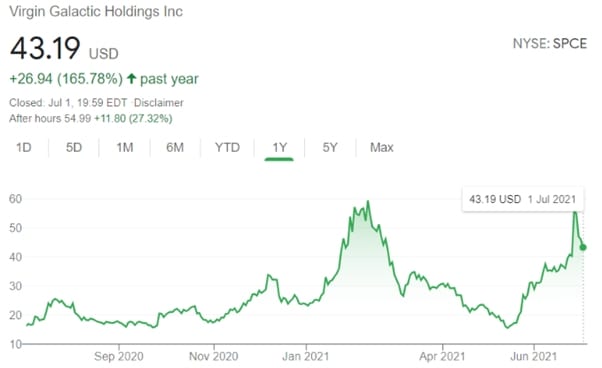 If the 70-year-old entrepreneur does manage to travel the 55 miles above the surface of the Earth to near space on the 11th of this month he will do so before friendly rival Jeff Bezos, the Amazon founder. Bezos plans to be aboard his space exploration company Blue Origin’s New Shepherd rocket for a similar flight to the edge of space on July 20th. He will be accompanied by his brother Mark Bezos.

Branson’s flight was able to be brought forward after Virgin Galactic was granted a passenger license by the Federal Aviation Administration. The company, which is listed on the New York Stock Exchange, has also decided against one last test-flight that had originally been planned.

Sir Richard commented on the news:

“I’ve always been a dreamer. My mum taught me to never give up and to reach for the stars. On July 11, it’s time to turn that dream into a reality.”

The 8-seater VSS Unity will lift off from its New Mexico base at Spaceport America, carried underneath its carrier aircraft VMS Eve, touchingly named in honour of Sir Richard’s late mother. At an altitude of 9.5 miles, the rocketship detaches from the VMS Eve and engages its rockets, which then propel it to the sub-orbital edge of outer space another 45 miles higher.

After gliding for several minutes to allow passengers to unstrap from their seatbelts to experience weightlessness and the view of the Earth below, the Unity then descends to Earth for a runway landing.

Blue Origin’s New Shepherd will also fly to the same sub-orbital height but tackles the challenge differently. A passenger and pilot capsule that also takes up to six passengers is blasted into space on a rocket in a vertical launch from the West Texas desert. The capsule detaches from the rocket at its final destination and descends back to Earth safely with the help of a parachute.

As well as the Bezos brothers, 82-year-old Wally Funk will be onboard the Blue Origins flight. Funk is a former flying instructor and veteran aviator who passed through Nasa astronaut training in the 1960s but was never selected because the space agency decided against sending a woman into space at the time. There will also be an as yet anonymous fourth passenger who bid $28 million to secure their seat.

Virgin Galactic’s next flight will carry the first 6 of 600 passengers who have already paid up to $250,000 each for tickets. Sir Richard concluded:

“It’s one thing to have a dream of making space more accessible to all; it’s another for an incredible team to collectively turn that dream into reality. As part of a remarkable crew of mission specialists, I’m honoured to help validate the journey our future astronauts will undertake.”

2020 was a disaster for income investors as the onset of the coronavirus crisis... END_OF_DOCUMENT_TOKEN_TO_BE_REPLACED

With gains of 21% since the beginning of the year, commodities has been the... END_OF_DOCUMENT_TOKEN_TO_BE_REPLACED

The London-listed mining company Rio Tinto has just announced it will pay out record... END_OF_DOCUMENT_TOKEN_TO_BE_REPLACED

Since he founded it as an online bookseller from the garage of his rented... END_OF_DOCUMENT_TOKEN_TO_BE_REPLACED

Last month the board of Wm Morrison, the UK’s fourth largest supermarket chain by... END_OF_DOCUMENT_TOKEN_TO_BE_REPLACED