The Virgin Galactic share price is up over 3% in pre-market trading today after Sir Richard Branson, the 70-year-old British lifetime entrepreneur, yesterday became the first owner-astronaut to travel to the edge of space on his own company’s rocket ship. In doing so, Sir Richard, who travelled to 86km above the surface of planet Earth with five other crew aboard the VSS Unity spacecraft, was the unlikely winner of a billionaires space race that features Jeff Bezos and Elon Musk. 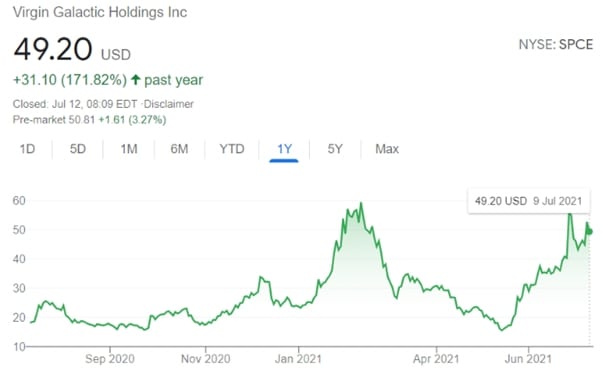 The spacecraft, which had been launched from around 10 km above the Earth where it had first been carried by a carrier jet, reached the edge of space at 09.26 am local time in New Mexico, from where the ascension had started. After being released by VMS Eve, the carrier ship named after Sir Richard’s late mother who passed away earlier this year and had been due to fly to near orbit herself onboard one of her son’s flights, the Unity continued towards space at three times the speed of sound.

Until relatively recently, few would have expected Virgin Galactic to become the first passenger-carrying private space company to complete a successful mission to near space. Achieving his dream took Branson 17 years and at a cost of $1 billion of his personal fortune and the life of test pilot Michael Alsbury, who in a 2014 test flight crash. Even at the last the launch wasn’t free from last minute issues after a midnight dust storm in the New Mexico desert delayed proceedings by 90 minutes.

But the launch did go ahead and Sir Richard beat Amazon’s Bezos and Tesla’s Musk into space. Bezos, alongside his brother, is due to fly on his Blue Origin spacecraft as a passenger on July 20th.

Branson, with a glint in his eye and admission nobody will believe him, insisted his decision to board this weekend’s flight rather than the next launch as initially intended, had nothing to do with beating Bezos to the punch. It was, said Branson, simply because the conclusion was reached nothing would be gained from one more test flight.

Blue Origin, whose rocket will go higher than the VSS Unity, has been somewhat less than gracious about Sir Richard’s history making trip, dismissing his spacecraft as a “high altitude aeroplane”.

Blue Origin highlighted that the Unity does not reach the Karman line, the point 100km above the surface of Earth internationally recognised as the edge of outer space. The USA, however, considers space to begin at a height of 80km and Branson has retorted Virgin Galactic space tourism passengers will, like Blue Origin’s, spend four minutes in zero gravity.

After soaking up an historic moment attended by hundreds of press representatives Sir Richard made some attempt to defuse any tit-for-tat between the space tourism competitors, commenting:

“It really wasn’t a race . . . We wish Jeff the absolute best, and the people going up with him during his flight. It was great this morning to find Elon in my kitchen at 3 o’clock to come and wish us the best.”

The flight that took Sir Richard into near space on Sunday was still officially part of a series of test flights the company must complete before launching commercial operations. Two more are planned before paying customers, of which around 700 are said to have paid from $250,000 each for seats, will be carried.

2020 was a disaster for income investors as the onset of the coronavirus crisis... END_OF_DOCUMENT_TOKEN_TO_BE_REPLACED

With gains of 21% since the beginning of the year, commodities has been the... END_OF_DOCUMENT_TOKEN_TO_BE_REPLACED

The London-listed mining company Rio Tinto has just announced it will pay out record... END_OF_DOCUMENT_TOKEN_TO_BE_REPLACED

Since he founded it as an online bookseller from the garage of his rented... END_OF_DOCUMENT_TOKEN_TO_BE_REPLACED

Last month the board of Wm Morrison, the UK’s fourth largest supermarket chain by... END_OF_DOCUMENT_TOKEN_TO_BE_REPLACED