Some big gains in the value of the start-up equity stakes held by its $100 billion Vision Fund and its successor, the now $30 billion Vision Fund II, drove Japanese investment group Softbank to a $46 billion (¥4.98tn) annual net profit for the year to the end of March. The sum almost doubled the previous record, the ¥2.5tn reported by Toyota during the 2017-18 fiscal year, for an annual profit recorded by a Japanese company.

Masayoshi Son, the Softbank founder and chief executive, cautioned that the stellar sum was the result of a combination of favourable circumstances, particularly IPOs for a number of the company’s the Vision Fund had invested in. He emphasised the back-patting should be limited in the context of other failed investments, with WeWork, Katerra, and Greensill name-checked. But was also keen to promise investors the huge profit would not prove to be a “one-off”.

Despite the overall success for the last fiscal year, whose beginning almost precisely mirrored the onset of the Covid-19 pandemic, some of Softbank’s biggest investments, like WeWork and Uber, were badly impacted by lockdown restrictions. But a generally bullish market for technology companies meant that a falling valuation for some stakes was more than compensated for by big returns elsewhere.

One of the biggest contributors to the huge profit was South Korean e-commerce company Coupang, which went public in March. The Coupang IPO turned Softbank’s original $2.7 billion investment in the company into a stake worth $28 billion.

However, some of the valuations that drove the $46 billion net figure have fallen back since the end of March as a result of the general sell-off in U.S. technology stocks catalysed by growing concern over creeping inflation. That’s seen Coupang’s valuation drop from a high of $118 billion to $62 billion currently. The value of the group’s stake in Uber has also shed 15% over the past several weeks, as has its shareholding in KE Holdings, which owns the popular Chinese property platform Beike Zhaofang.

With market volatility is expected by many to remain a factor for the foreseeable future, Softbank will face a challenge in mitigating the same level of volatility in the value of its holdings. However, Son expects the market for public offerings to remain robust, which he hopes will mean several more start-ups the group invests in will move to IPO over the current financial year. That will allow stakes to be monetised. 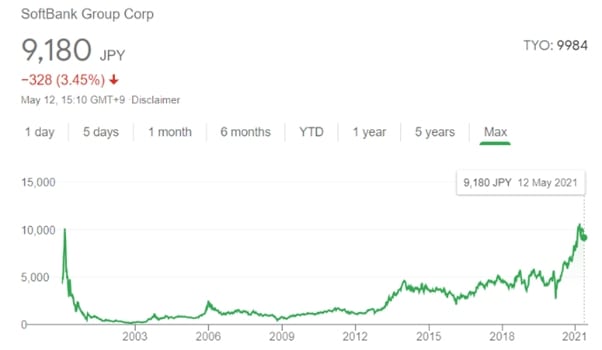 The Softbank share price reached a 21-year high in mid-March but has since fallen back by around 17%.

US stocks suffer biggest slump in at least 11 weeks

The private equity sector and cash-rich firms that comprise it split opinion. Some view... END_OF_DOCUMENT_TOKEN_TO_BE_REPLACED

At the end of August, The Times newspaper reported on two real estate funds,... END_OF_DOCUMENT_TOKEN_TO_BE_REPLACED

The Covid-19 pandemic has famously seen many sectors of the economy fall into two... END_OF_DOCUMENT_TOKEN_TO_BE_REPLACED

Britain, like most of the world, has traditionally been a country of milk and... END_OF_DOCUMENT_TOKEN_TO_BE_REPLACED