Volkswagen, the German carmaker that also owns the Audi and Porsche brands, has said it will stop making many of its petrol and diesel car models by the end of the decade. The world’s largest vehicles manufacturer by revenue in 2021, it earned $254.1 billion compared to second-placed Toyota’s $249.4 billion, said it intends to focus less on market share and more on its margins.

Historically referred to, especially in its native Germany, as “the people’s car company”, Volkswagen’s strategy is now moving away from its traditional strength as a maker of mass-market vehicles. It wants to prioritise its premium Audi and Porsche marques and focus on margins and profitability rather than top-line growth. 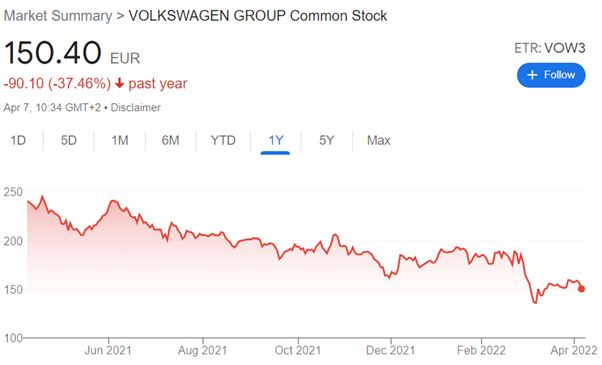 “The key target is not growth. We are [more focused] on quality and on margins, rather than on volume and market share.”

The FT reports that Volkswagen plans to cut its petrol and diesel ranges by 60% by the end of the decade. That means around 100 models being reduced to approximately 40. Moving away from a strategy of dominating the car market on market share of overall vehicle sales to one focused on higher margins is a split from the company’s previous approach. A major influence in the change of direction is believed to be the recent shortage of microchips which has been impacting all manufacturers.

Antlitz also highlighted the fact that rising raw material costs, especially for those used in electric vehicle batteries, is casting double on earlier calculations EVs would soon be as profitable as traditional combustion-engine models. Even Tesla, currently the world’s largest seller of EVs, has had to rely on the sale of emissions credits to traditional carmakers selling large numbers of combustion engine models to achieve profitability.

While EV sales are growing quickly, recent figures show 76% growth in the numbers of fully electric cars sold in March (a record 39,313) compared to a year earlier, affordable mass-market prices will be important to replacing the existing stock of combustion engine vehicles at a faster rate.

Currently, one in six cars sold in the UK is fully electric, around 16%, compared to 8% a year ago. However, that will be expected to rise quickly over the next few years are more EV models hit the market and petrol and diesel-engine models are phased out before the government’s 2030 deadline for no new sales of fuel-burning cars.