Wall Street closed last week on the brink of entering a bear market, and at one point had slipped into official bear territory last Friday with the S&P 500 down over 2%. It recovered late in the session to finish the day almost flat, meaning losses for the year totalled 18.66%. A market is classified as a bear market when it has declined by at least 20% from its most recent hight, meaning that the S&P 500 will pass that threshold if it loses another 1.44% in the days ahead.

Despite its late Friday rally, the S&P 500 has now closed down for the past seven weeks in a row. The last time the index went on such a long losing streak was during 2001 while the dotcom bubble was bursting.

The Dow Jones has gone one further and has now declined for the past eight successive weeks. That’s the broadest-based major Wall Street index’s longest losing run since 1932. However, despite enduring an even longer run of consecutive losing weeks than the S&P 500, the Dow Jones has fallen by only 14.55% this year, meaning it still has some way to go before entering official bear territory. Its most recent high was set on January 3rd, just a little above where it closed 2021. 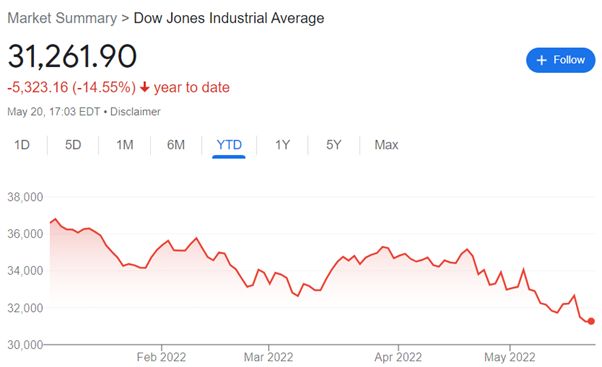 The S&P 500’s most recent high was set on December 27 and the index closed the year just 100 points off that peak. The tech-focused Nassaq is down over 28% for the year to date and is already deep into bear market territory. The sell-off affecting all three of the major U.S. indices started with tech stocks but has since spread with retail stocks taking a battering last week too on signs of falling consumer confidence. Even budget-friendly retailers like Walmart and Target in the USA suffered last week, down around 20% and 30% respectively. Both stocks usually do well during periods of economic turbulence as the companies sell consumer essentials at competitive prices.

Stock markets have been hit this year by a combination of geopolitical uncertainty after Russia’s invasion of Ukraine, high levels of inflation and central banks raising interest rates in an effort to tame inflation. Commodity prices have risen particularly dramatically, which has had the knock-on effect for driving up costs for most companies. That’s being passed on to consumers, driving inflation up to levels not seen in decades.

Analysts at the U.S. bank Goldman Sachs estimate there is currently a 35% probability of the U.S. economy entering recession territory at some point in the next two years. The last bear market in the world’s largest economy was in 2020 when the S&P 500 lost 34% between late February and late March as the Covid-19 pandemic hit. However, the downturn proved brief with markets quickly recovering and then surging to new heights until late last year when the current sell-off started to take hold.