Wall Street is hoping Q3 earning season reports, which kick off this week when many of the big U.S. banks will divulge their 3-month results, will see stock markets kick on again. But that will, to a large extent, rely on evidence that Q3 earnings have taken a solid step forward from Q2 and depths of lockdown both at home in America, and internationally. 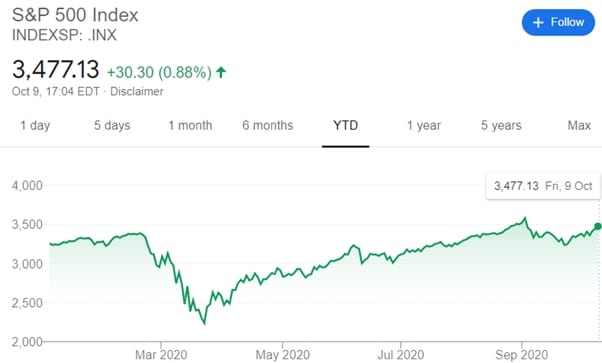 With investors believed to be expecting significantly improved results, compared to the tragedy of the second quarter, there is a risk that companies falling short of that could dent confidence. Tobias Levkovich, Citigroup’s chief U.S. equity strategist, comments:

“Investors are anticipating a major recovery from the second quarter’s coronavirus hits. It appears as if the ending of full shelter-in-place mandates and some re-opening allowed a sort of stabilisation, as did significant fiscal and monetary stimulus.”

The major U.S. indices have largely shrugged off the months of income in many sectors being hit hard by the Covid-19 pandemic, with the S&P 500 currently up nearly 2% its March low. That seems to be a combination of big gains for the tech sector, which has broadly benefitted from the situation thanks to an acceleration of digitalisation, and investors in sectors to suffer focusing on a presumed strong recovery once things get back to normal, or something approaching it.

Q3 will undoubtedly see earnings figures that are still significantly down on the same period last year but over the past few weeks analysts have been revising their forecasts up. The consensus view is that pan-sector third quarter profits across the S&P 500 will be 22% down on last year with the drop led by the transport, energy and consumer discretionary sectors. That would still be a marked improvement on the first 6 months of the year. Over the first quarter, profits were down 26.5% and 32.3% over the second.

There are worries that analysts’ optimism may be disappointed. Mr Levkovich cautions:

He also suspects that investors may be distracted from earnings, with their attention focused more on “the upcoming elections, vaccine news and stimulus package developments.”

Earnings season will kick off this week with results from an industry whose performance is among those most closely tied to the underlying economy – the banking sector. The ‘big four’ of JP Morgan, Mr Levkovich’s Citigroup, Wells Fargo and Bank of America will report on their Q3 performances on Tuesday and Wednesday of this week. Investment banks Morgan Stanley and Goldman Sachs will post their results on Wednesday and Thursday. Blackrock, the world’s largest asset manager publishes its figures tomorrow.

Slumping demand for credit and loan payment defaults rising may make tough reading. While the Fed’s move to drop the base interest rate to almost zero was designed to encourage borrowing, it also makes it difficult for lenders to make money. Writedown levels on existing loan books will be a key focus of market analysts. The expectation is that charges will have dropped compared to those in Q1 and Q2, thanks to the surprise extent of the economic recovery in the USA between July and September.

The finance sector has until now proven a drag on the wider U.S. stock market rally and profits are forecast as coming in at just over 40% down on the same three months last year. Any worse than that and banking stocks may be hit again. A more robust performance than expectations may help fuel a new wave of stock market optimism.