The 21st Century equivalent of Joe Kennedy, father of JFK, selling out of the stock market just ahead of the crash that preceded the Great Depression because his shoeshine boy started giving him stock tips is the Uber driver waxing lyrical about Bitcoin. With it recently breaking through the $60,000 barrier, everyone and their dog seems to be in on the Bitcoin narrative.

With the cryptocurrency having risen from around $5000 last March to over $60,000 less than a year later, it does look very much like a classic bubble. Most in the financial establishment expect it to pop, or at least see a major correction and period of consolidation for Bitcoin, at some point over coming months. 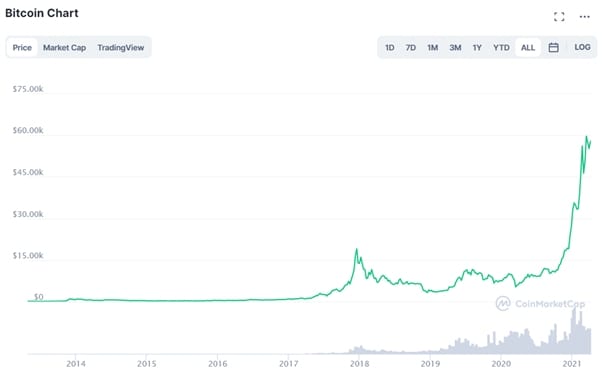 But there is another narrative to the presumption the current Bitcoin price is a bubble. That the acceleration to a digital economy over the past year has seen the cryptocurrency come of age as an alternative to gold as a store of value. Veteran Wall Street stock picker Cathie Wood thinks so. Her investment vehicle Ark Invest expects Bitcoin’s market capitalisation to “comfortably” overtake gold’s $10 trillion collective value.

Ark Invest’s Yassine Elmandjra, a cryptoasset analyst, has hit back at the financial establishment’s policymakers, including U.S. Treasury secretary Janet Yellen, for warned investors off Bitcoin. Ms Elmandjra thinks their arguments the cryptocurrency is inefficient, unstable and a conduit for illicit finance are out of touch:

“I really think that it’s just outdated arguments as a function of their complete lack of education, which is a function of just their lack of interest in learning about this.”

While acknowledging Bitcoin’s volatility, Elmandjra argues the “massive price swings”, that affect price on an almost daily basis actually “highlights the credibility” of the cryptocurrency as independent of governments and bankers.

It should be noted Ark has plenty riding on its interpretation of Bitcoin’s price gains over the past 12-months proving correct. It has big bets on technology companies and heavy exposure to the share price of Tesla, which it has forecast to hit $3000 by 2025. It’s currently at $660, having risen from $85 last March – a price level many analysts already feel is grossly inflated.A number of Ark’s funds were boosted by the 720% gain the Tesla share price registered last year but have since struggled with technology stocks giving up some gains in recent months. Tesla’s correction has been particularly severe, with the company losing a quarter of its value since an early January share price peak of over $880. Ark boss Wood, a Wall Street veteran at 65 and influential figure for day traders, has not been put off and doubled down, increasing Tesla holdings across Ark’s funds.

The Tesla share price is now linked to the fortunes of Bitcoin. The company announcing in February that it had invested $1.5 billion in the cryptocurrency, adding it wanted to start accepting payment for its cars in it.

The Bitcoin value was again boosted last week by regulators approving the Wall Street listing of the digital currency exchange Coinbase – seen as a significant breakthrough for the sector. JP Morgan analysts also wrote they saw “tentative signs” of a reduction in volatility.

“If you look at gold as a $10 trillion market cap, bitcoin is about 10 per cent of that, and if we believe bitcoin is a 100 times better version than that, then it’s fairly safe to say that there’s a stark chance that bitcoin captures a lot of gold and market share, and more.”

The UK’s Financial Conduct Authority has urged British consumers to display caution when investing in digital assets such as Bitcoin, warning anyone who does so “should be prepared to lose all their money”.