The Walmart share price slumped by 11.38% yesterday for the U.S. retail and groceries giant’s worst trading day in 35 years. The fall came after the company’s president and chief executive Doug McMillion told investors the retailer was cutting its full-year earnings guidance. Runaway inflation is expected to dampen consumer spending over coming months as well as driving up Walmart’s overheads.

Yesterday’s precipitous drop in Walmart’s valuation wiped out strong gains the retailer has made since February. It was the biggest single day drop in the company’s share price since an 11.8% plunge in October 1987. Walmart’s market cap of $361.58 billion is at its lowest point since last March. 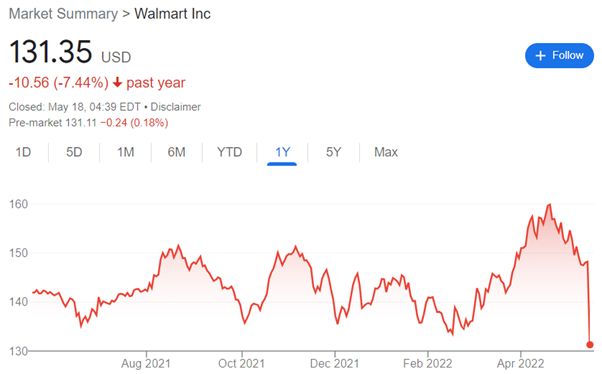 Mr McMillion told shareholders that the high levels of inflation over the past several months had “created more pressure” on the company’s margins and costs than had been anticipated. As a result, Walmart is, he said

“adjusting and will balance the needs of our customers for value with the need to deliver profit growth for our future.”

U.S. data released yesterday was, however, a silver lining and showed GDP growth of 0.9% last month. Economists described that as a show of consumer strength despite price rises. Quoted in The Times newspaper, Paul Ashworth of Capital Economics commented on the growth:

“Speculation that the US economy is in danger of an imminent plunge into recession looks badly misplaced.”

Walmart is the biggest retailer in the world by sales turnover, surpassing even e-commerce specialist Amazon. Last year’s sales were worth $572.8 billion. The company operates around 10,500 stores employing 2.3 million staff across 24 countries, 1.6 million of which are based in the USA.

Over the three months to April, Walmart’s revenue grew 2.4% compared to the same period last year to come in at $141.6 billion. That was ahead of expectations for $139 billion but wasn’t enough to convince investors to not head for the exit doors after net income for the same period dropped 25% to $2.05 billion as a result of higher costs. That saw earnings per share fall below analysts’ forecasts over the first quarter of the year. The company now expects earnings-per-share to fall by 1% this year when forward guidance had previously been for mid-single-digit growth.

Neil Saunders, managing director of data company GlobalData Retail, pointed out that periods of high inflation have historically been a positive for Walmart because consumers who may have before shopped at more “upmarket” retailers become more price sensitive. However, he also noted that Walmart’s margins will suffer if it, as expected, keeps prices as low as possible for consumers despite its own costs rising.