Warren Buffet has revealed his investment vehicle Berkshire Hathaway has built up a 9.5% stake in the video games company Activision Blizzard worth around $5.6 billion. After a decade of sporadic investing, because Buffet and his team could find few opportunities they considered to represent acceptable value, the Sage of Omaha has recently embarked on a spending spree.

Buffet was convinced to build Berkshire’s significant stake in Activision Blizzard after Microsoft bit $69 billion for the company. The $95-a-share offer is far from certain to get the green light from regulators but if the deal does go through it will represent a significant return for Buffet with the company’s share price currently sitting at just $75.6. 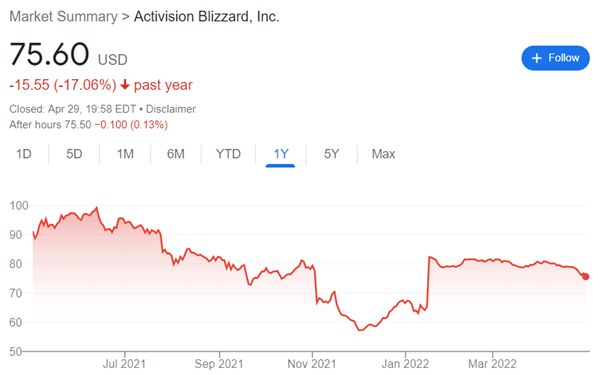 That large gap shows the extent of market scepticism over whether Microsoft will be able to complete the purchase. However, Buffet is presumably confident that even if that deal doesn’t go through Activision will go on to justify the tech giant’s readiness to offer that premium. And there’s always a chance another buyer could come forward.

Buffet revealed the investment in Activision over the weekend when Berkshire Hathaway’s annual general meeting was held in Omaha Nebraska. Investors making the pilgrimage to Nebraska to listen to the Sage of Omaha, as Buffet is known, explain Berkshire’s investment strategy and decisions has become an event on the annual calendar. However, this year’s Berkshire AGM was particularly anticipated as the first in-person event in three years due to the pandemic.

Buffet told the audience, which included Bill Gates, Apple chiefs Tim Cook and Bobby Kotick and the actor Bill Murray, that Berkshire has built its Activision Blizzard stake to 9.5% this year from the 1.9% it held at the end of last year. The company makes video games title including Call of Duty, Crash Bandicoot and the Warcraft series. At a price tag of $69 billion, its proposed acquisition by Microsoft would be one of the biggest ever deals in stock market history.

Buffet told attendees at the weekend event that he was personally behind the decision for Berkshire to up its exposure to Activision, commenting:

“It is my purchases, not the manager who [initially] bought it some months ago. If the deal goes through, we make some money, and if the deal doesn’t go through, who knows what happens.”

Berkshire is the investment vehicle run by Buffet since 1965 and with a market capitalisation of over $700 billion is one of the most valuable companies in the world. It outright owns companies including the insurer Geico, U.S. ice cream parlours chain Dairy Queen and freight railroads company BNSF and has stakes in wide range of companies including Apple, Bank of America, American Express and Chevron.

Over the first quarter of 2022, Berkshire spent a total of $51 billion buying shares and sold stock worth $9.7 billion. It’s the first time since 2008, when markets had also slumped, that its net purchases have been so high. At the end of 2021 the company had a cash pile of $146.7 billion and in his annual letter to investors in February Buffet had told investors there was “little that excites us” on the market.

But in March, Berkshire announced an $11.6 billion takeover of the insurer Alleghany, its largest deal in six years. It also acquired significant stakes in HP and the U.S. oil producer Occidental Petroleum. Despite the recent spending Buffet stressed the company will “always have a lot of cash on hand”.

While the 2022 market downturn may be presenting attractive acquisition opportunities, the drop in the valuations of existing holdings saw Berkshire record a $1.58 billion loss for the quarter to March. Net earnings also halved from around $11.7 billion to $5.46 billion. Buffet commented that gains or losses over any given quarter were “often meaningless.”