What is ‘identity investing’ and just how much is it impacting stock market valuations?

It’s not so long ago millennials and Gen Z were being criticised for spending all their money on expensive brunches in hipster Shoreditch pop-up venues, and the like. Less poached eggs and avocado on wholegrain toast equals a deposit for your first home, you young whippersnappers!

Although, with the average price of a home in gentrified Shoreditch (long gone are its days as an East End slum) now over £728,000, even the most cynical old-timer would have to admit a lot of brunches would have to be sacrificed on the way to a 10%-20% mortgage. And a pre-tax income of over £10k-a-month to stand a chance of getting that mortgage. A first-time buyer on over £10k-a-month probably feels like they’ve earned the right to splurge £20 on brunch if they feel like it.

Anyway, I digress. Recently millennials and Gen Z have been attracting flack for another way many have been choosing to spend their hard-earned money. Now they are being criticised for investing. They aren’t, think many, doing it right.

Newly-enthused young investors are messing up the stock market for everyone else by backing companies they identify with and not buying shares in perfectly good business models that don’t share their personal values. Like environmental sustainability, paying workers a fair wage etc. It’s all very irresponsible.

What is identity investing?

To be fair to the commentators who are critical of the methodology many younger investors are perceived to have, the objection, at least for most, is not that they chose to invest in companies they “like”.

It’s more that liking a company sometimes seems to be the only criteria for the new breed of investors to buy shares in it. With relative disregard as to whether there is a good financial argument why those shares are currently valued by the market as they are.

The term ‘identity investing’ was cleverly coined by The Daily Telegraph journalist Ben Wright to refer to what he describes as “the newest breed of traders who buy stocks simply because they are fans”.

Electric car-maker Tesla is put forward as the most obvious example, say critics, of identity investing driving a valuation that has little connection to the actual underlying business. Over the course of 2020, the number of retail investors holding Tesla stock doubled. With many of the small investors in Tesla stock under the age of 34, the surge has been attributed to a year of pandemic-related lockdowns. Many of the new investors made use of having to spend more time at home by starting to trade stocks.

Ordinarily, that would be seen as a good thing. We all know state pension systems are looking shaky and any list of prioritised investment advice would have ‘start early’ near the top.

But the worry is enthusiastic young investors backing companies without much thought for if their share price represents something approaching fair value could lose their shirts. And then be put off investing for the long term. 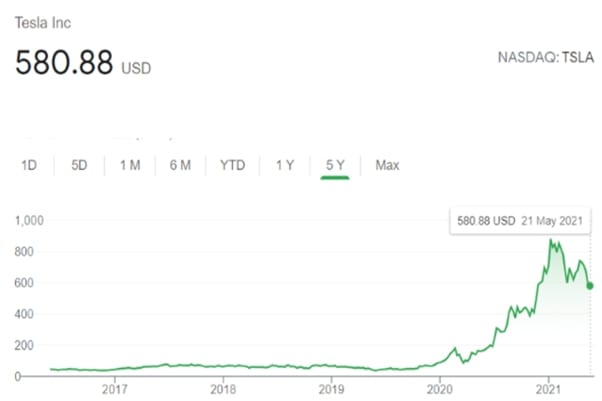 A single Tesla share was worth $88.60 at the beginning of January 2020. Less than 18 pandemic-blighted months later and the company’s stock trades at $580.88 – a gain of over 550%. And it’s actually dropped a lot since the beginning of the year when January highs saw Tesla shares changing hands for $880.

Is identity investing damaging stock markets for everyone and putting young investors at too much risk?

It’s unusual for a major company’s valuation to show the kind of volatility Tesla’s has exhibited. At least without any major catalyst like sales going through the roof to surprise all previous expectations and a logical reason why they might sustainably stay much higher. Or sales dropping off badly and a logical reason why they may stay depressed.

Neither of those things has happened in Tesla’s case. It’s a company most accept looks to have a promising, even very promising, future as a leader in the new electric car market that will gradually replace traditional models running on petrol or diesel. But does that justify a market capitalisation that makes it the most valuable car manufacturer in the world by a distance?

And more importantly, a valuation that, despite a share price down over 30% this year, still represents a p/e ratio of over x585? Toyota’s is x11 and it sells more vehicles than anyone else. Many times more than Tesla. General Motors trades at a p/e ratio of a little over x9. BMW about the same and Volkswagen, despite a share price that has recovered from the recent emissions scandal to approaching historical highs, trades at a conservative p/e of just x7.5.

Many analysts prefer to look at a forward-looking p/e ratio that divides a company’s current valuation by its projected future revenues. Tesla’s valuation is also eye-watering on that metric at over x130 or x178 taken as a 5-year average. 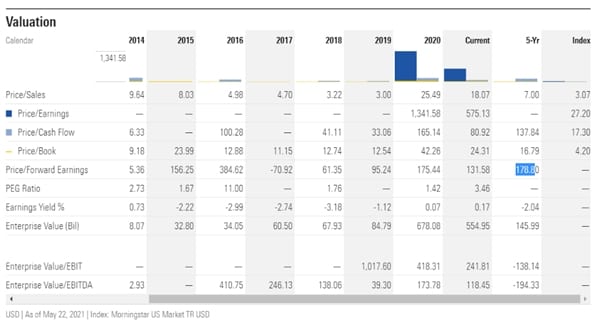 To put that in context, many investors are worried because the S&P 500 currently trades at a forward-looking p/e ratio of x51 that is many times higher than historical averages. And Tesla’s is several times that.

That isn’t in itself necessarily a damning statistic if Tesla’s profits have a realistic chance of growing to a level to justify that multiple over future years. Does it?

“using actuarial methods to calculate the odds that a company will make the profits that investors are expecting. For those who don’t know, actuaries are super mathematicians who try to work out the probabilities of events happening in the future”.

The team concluded Tesla was 55% likely to not meet the kind of profit level that would justify its valuation. Put another way, a negative outcome for investors who have bought Tesla shares over the past several months is more likely than not.

That is almost certainly why successful tech investors like Baillie Gifford’s Scottish Mortgage Investment Trust have been selling down their stakes and locking in huge profits banked by the phenomenal recent share price gains. All the data suggests it is small, more often than not young, retail investors who have been buying those shares and propping Tesla’s valuation up, even if it has cooled in recent months.

As Mr Wright wrote of the identity investing trend that has driven Tesla’s gains, the company’s market capitalisation implies:

“Tesla’s brand and technology become so dominant that the company can earn profit margins that exceed those of Ferrari on a level of production exceeding that of Toyota”.

Even the UK’s Financial Conduct Authority is a little concerned. And the regulator doesn’t usually do much until someone starts to worry about a scandal and accusations of the regulator not doing much.

In March the regulator warned younger investors are engaging in “unsuitable” high-risk investing. A new breed of ‘gamified’ investment sites and apps is being apportioned much of the blame as to why almost two-thirds of these new investors purchased investments classed as high risk, such as cryptocurrencies. The worry is many are at risk of losing money they cannot afford to lose.

Stocks like Tesla and GameStop, are showing the same kind of volatility most associated with cryptocurrencies. The latter is a video games retailer whose valuation has multiplied many times, and seen huge drops, over recent months. That volatility has been driven by a large crowd of mainly inexperienced traders organised through a Reddit forum, trying to teach ‘greedy’ predatory hedge funds a lesson by ‘squeezing’ them out of short positions held on the stock.

The fact GameStop is worth ten times more than it was at the start of the year is not down to any major improvement in the company’s outlook, despite ambitions to develop into an online retailer. Instead, its valuation is a result of a crusade against hedge funds supported by mostly young millennial and Gen Z traders. 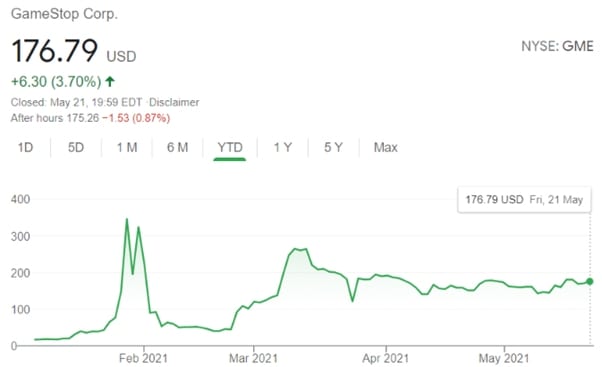 Is there also an argument in support of identity investing?

But outside of the extremes, there’s also plenty of support for identity investing as long as it remains within some kind of reasonable framework. It’s hard to deny a new generation of investors who refuse to support, even if it means potentially denying themselves maximum returns, companies whose ethos or industry they don’t believe is sustainable, is helping drive change at the boardroom level.

Energy giants like BP and Shell, oil and gas giants that have famously been among the world’s biggest polluters for decades, have committed to becoming ‘carbon-neutral’ by 2050. That is to be achieved by weaning themselves off income from fossil fuels and instead investing heavily in renewables.

Financial markets are providing next-generation food companies, like Beyond Meat which develops and sells plant-based meat alternatives, at the expense of traditional meat companies, which are also now seen as major contributors to global emissions. And that in turn has encouraged venture capital markets to throw money at other food tech companies in areas like lab-grown meats.

The money pouring into the industry is turbo-charging R&D and means there is a genuine possibility most of the meat products we eat won’t involve the slaughter of live animals with a decade or two.

Identity investing is a double-edged sword

The conclusion has to be young identity investors can be a huge force for good in financial markets. But fandom pushing the valuations of certain companies to extremes is also a major risk for financial markets as a whole and particularly for the finances of those investing in potentially massive bubbles.

Most inexperienced investors have a learning curve and starting young means lessons can be absorbed without much long-term damage and plenty of long-term benefit. Let’s just hope the lessons that investing in stocks like Tesla at their current levels don’t prove harsh enough to put large parts of a generation off investing for good. Because identity investing could also prove a major stimulus that rewards sustainable companies and punishes less ethical and more short-sighted rivals.