What Now For Facebook and Its Share Price as 20% Is Wiped Off Tech Giant’s Value In a Day?

In 2 hours Facebook’s value dropped by more than the large majority of publically traded companies will ever be worth. On July 25th Facebook’s share price closed at a record high of $217.5. Yesterday, it dropped off a cliff.

The social media giant’s value plummeted by just shy of 19% between the announcement of the company’s second quarter earnings after markets closed on Wednesday and their opening on Thursday morning in New York. In two hours of after-hours trading, Facebook’s market capitalisation fell by approximately $123 billion. It marks the biggest ever single-day loss for a US-listed company in history. 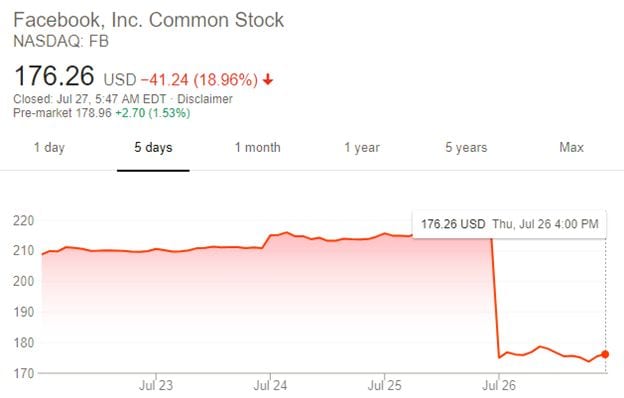 Many UK investors, especially millennials, own shares in Facebook and the other US tech giants known collectively as the FAANG stocks. Many others will be invested in funds through their ISA, SIPP or workplace pension that will also be heavily exposed to the big tech U.S. tech stocks. Others may wonder if now is a good time to buy into Facebook at a more attractive valuation.

If your investment portfolio does include exposure to Facebook, either actively or passively as part of a fund, you probably have several pressing questions at the moment. We’ll try to address them here by looking at why the post-results plunge was so dramatic, if there is a risk of contagion and the wider Fang+ index being hit and what the experts are saying about where Facebook’s share price goes from here over the coming months and years.

The last time Facebook attracted such widespread media coverage was back in March when the Cambridge Analytica data scandal broke. Facebook had allowed the UK-based consumer data and research consultancy to ‘harvest’ the profile data of 50 million users of the social media platform via a personality test app hosted on the site. Not only were the profiles of those who had used the app taken but also those of their Facebook contacts. Facebook had granted the company access to the data but this access was supposed to be temporary and not used for commercial purposes. Neither was the case and Facebook was accused of corporate negligence in allowing uncontrolled third party access to user data.

Immediately after the scandal broke, Facebook’s share price dropped 5%. The fall-out, which coincided with President Trump attacks on the amount of tax being paid by Amazon, spread to other big tech stocks. Twitter share’s price fell by 12% the same day, Alphabet dropped 4.6%, Tesla 8%, Nvidia 7.8% and Apple 2.6%. The Fang+ index made up of Facebook, Apple, Amazon, Netflix and Google (Alphabet) as well as several other big U.S.-listed tech companies slumped 5.6%.

Many market observers felt the short, sharp correction would mark the beginning of a deeper slide for big tech stocks trading at highly aggressive multiples. It was thought that tightening regulations around the collection and use of the personal data digital platform/social media companies rely on to drive revenue, a crackdown on taxes being paid and regulator moves to ensure greater competition were about to combine to slowdown growth. With investor confidence in runaway adoption and revenue growth shaken, the ‘Emperor’s New Clothes’ façade sustaining big tech’s huge p/e multiples would crumble and share prices slump back towards more traditional ratios.

However, it didn’t happen. In fact, quite the opposite. From the end of March the share price of Facebook, and the rest of Fang group, recovered to go on a spectacular bull run. Facebook’s share price gained around 30% in a little over three months and the Cambridge Analytica scandal, along with the shadow of the other threats to the tech giants, faded into the background.

The shadow cast by the fear of a global trade war resulting from President Trump slapping wide ranging tariffs on Chinese and other international imports spooked financial markets. But that didn’t result in capital flow into gold, the yen, Swiss franc or other traditional safe haven assets. Instead, it flowed into the Fang stocks in increasing volumes. Big tech seemed to have become the world’s new ‘safe haven’ asset class. Institutional investors had come to the conclusion that if tit-for-tat imposition of trade tariffs were to bite U.S. and other global equities, the Fang stocks would be less affected than most.

The sudden plunge in Facebook’s share price this week raises the question of whether it, and by proxy the rest of big tech, has been in the melt up stage of a bubble over the past few months. A melt up marks the end of a strong bull cycle and is represented by a particularly strong surge in valuations as investors forget about risk and fundamentals, carried away by the market’s momentum. It is followed by a crash, or significant correction. Twitter’s share price has plunged, also by around 20%, the day after Facebook.

So far the other big tech stocks are holding. Amazon posted record quarterly profits the day after Facebook and while Netflix’s share price also took losses after the content streamer missed forecasts for new subscribers in Q2, they were nowhere near as severe as Facebook’s.

Why Did the Market React So Severely to Facebook’s Q2 Results and Is It Contagious?

So after hoovering up Facebook shares for 3 months, what exactly was revealed in this week’s results that spooked investors so much that the company lost a fifth of its value in 2 hours?

Growth Rate Deceleration: over Q2 2018, the rate at which Facebook added new user accounts dropped to its slowest ever. Total users grew by 1.54% compared to 3.14% the previous quarter. The drop off in active user growth was more pronounced, down to 1.44% from 3.42%. That’s more than a full percentage less than the previous low in active user growth of 2.18%, set in Q4 2017.

While it’s natural that Facebook’s growth rate slows as the company matures, it is the drastic ‘off a cliff’ slowdown over such a short period that has sparked such alarm among investors.

User Number Drop in Europe: the social media also saw its first ever drop in total user numbers in a region as Europe’s count dropped a million to 376 million from 377. The North American market of the USA and Canada was also flat. Those two regions are the company’s most lucrative for advertising revenue. 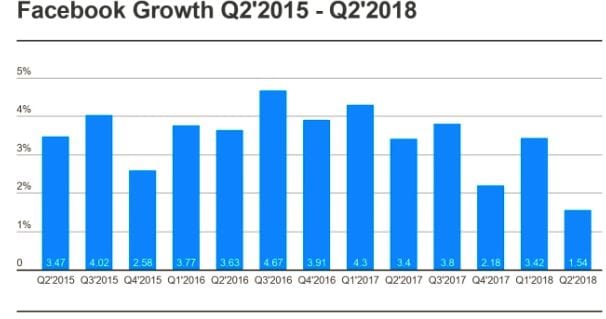 Revenue Growth Slowdown: over the last few years Facebook really seemed to have cracked monetization. Q2 also saw highly impressive year-on-year growth of 42% compared to the same period in 2017. However, forward guidance to the effect that this growth rate is anticipated to drop by high single figures over the coming quarters is perhaps the single metric that really hammered Facebook’s share price. Futures dropped from -7% to -20% on the previous close in the immediate aftermath of that warning being delivered by CFO David Wehner.

Platform ‘Improvements’ May Hit User Time Spent and Ad Revenues: a number of changes to the platform will have an unknown impact on user engagement and ad revenues. Tightening of privacy policies and GDPR compliance, the removal of junk viral content, push towards more user interaction and transition to ‘Stories’ are all being marketed as positive long term contributions towards Facebook’s sustainability and continued development. However, in the short term they look like having a negative impact on the metrics investors watch. Markets will not price in long term benefits the company are sure will be the result on a promise.

The question is now of course where does Facebook as a company, and its share price, go from here? Was the 20% collapse in share price a market overreaction and investors with shares should hold tight and wait for the recovery, or use the chance to buy the dip? Or is it a defining event that will see the company move more permanently towards a less aggressive multiple to reflect inevitably slower growth in users and revenue?

One thing important to note is that Facebook’s share price actually finished the day after the results lower than it opened, despite the huge overnight drop. The fact that investors didn’t pile in to ‘buy the dip’ immediately suggests a market consensus that the initial drop was perhaps merited and not a significant overreaction. It appears to be belated punishment for the company’s recent tangle with regulators and loss of user trust.

That doesn’t of course mean that there will not be a recovery over the coming weeks and months. Despite the huge losses sustained this week they have practically speaking only reset the company’s share price to where it was in early May so in bigger picture interpretations are less of a disaster than a correction of what was a valuation anomaly. Facebook’s share price went straight up in the months after the Cambridge Analytical scandal for now obvious reason tied to fundamentals.

Some analysts are seeing the correction as far less calamitous than the headline figures might suggest and that Facebook are taking a temporary hit, investing in a more sustainable future for the platform and adopting a strategy that will pay back longer term. If markets accept that logic, there is unlikely to be further losses and the fall in also unlikely to spread too far across the tech sector.

Others have compared this week’s slump with the Apple sell-off in 2000 when the company missed its earnings forecast. That then spread to other tech companies and became a major sector correction. Could Netflix and Facebook both delivering disappointing figures over the last couple of weeks precipitate a similar scenario unfolding over the next few weeks and months?

The positive scenario is Facebook regroups with lowered expectations, figures out how to monetise ‘Stories’ successfully and continues to be a revenue printing juggernaut for some time to come. The negative scenario is that market expectations are reset and growth rate optimism around big tech drops, leading to a wider sector correction that may take some time to reverse.

If this author had to make a call, it would be the former scenario but time will tell.