What The General Election Result Means For Investors: Pound, Banks, Housebuilders And Industries Threatened With Nationalisation All Rise

The first winter general election in almost half a century is finally over and resulted in a strong majority for the Boris Johnson-led Conservative Party. Those of varying political persuasions may well view the results very differently. But now the event has passed and the reality is what it is, it makes sense for anyone investing online to take off their political hat and quickly put on their investor hat.

Financial markets have already reacted to the result today and will continue to do so next week, even if to a lesser degree. The general election result will have an influence on investment portfolios. It already has. But how?

The pound sterling index, which measures the value of the pound against a basket of major international currencies, leapt 2.5% yesterday evening when polling stations closed and the exit polls indicated a strong Conservative majority. GBP has since eased back but is still significantly stronger and at its highest level since early spring, even if the value of the pound is still some way off its pre-Brexit referendum levels. It crashed by 10% immediately following the referendum. 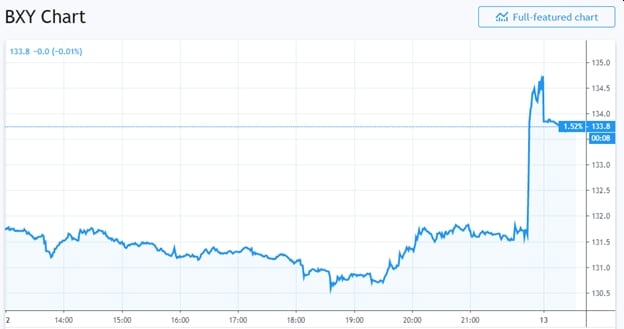 A stronger pound could actually have a negative impact on the FTSE 100, most of the constituents of which generate a majority of their revenues internationally, rather than in the UK. The FTSE 100 rose after the pound crashed in value after the shock referendum result in 2016. So far today the FTSE 100 is up, by 1.8% into afternoon trading, riding the wave of a generally positive mood in the markets and boost to some major sectors such as banking, housebuilders and utilities.

Were the pound to continue its upwards trajectory, though further volatility can probably be expected as Brexit approaches at the end of January, that could hurt major exporters. On the other side of the coin, it will benefit importers and more domestically-focused companies. That’s reflected today by the fact the FTSE 250, the constituents of which make, on average, a lot more of their money in the UK, has risen by over 4% to a new record high. 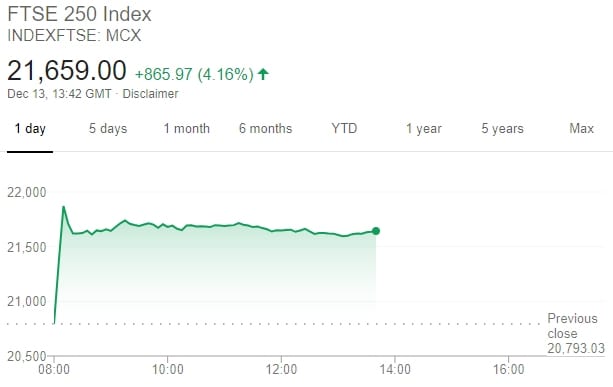 London-listed companies are more or less up across the board today, though some sectors have particularly benefited. Analysts believe the leap can be most attributed to the fact many investors have been shunning opportunities in the UK market over the last 3 and something years.

“These results really make the UK equity market investable again and I think we will see a greater focus on the fundamentals in terms of valuations, company prospects, rather than a real focus on political risk.”

Reflecting on the fact that the FTSE 100 has also show gains, despite the fact that around 75% of its constituents can be considered internationally-focused stocks, she added:

“I think that does reflect the potential appetite for UK equities from a broader audience than we have seen.”

Traders have noted that trading volumes of UK shares have risen to around seven times the average today. But which categories of stocks have been the biggest gainers? And have there also been losers?

Among the biggest gainers today have been companies in sectors Labour had said it would move to renationalise if voted into power. Utilities were the main target and Centrica (formerly British Gas), United Utilities, National Grid and water and waste utility Severn Trent were all up between 6% and 8%.

Banks have done well, with a particular emphasis on smaller, more UK-facing lenders from the FTSE 250. Virgin Money was up 17.8% by around midday and One Savings slightly over 11%. In the FTSE 100, among the best performing stocks have been the big housebuilders, on the presumption that the housing market will see more movement now that a level of political certainty has been restored. Taylor Wimpey has gained almost 15%, Berkeley Group 13%, Barratt Developments 12.5% and Persimmon over 11%. Estate agents Savills was also up 12.8%.

Companies that have done less well, some even sliding to share price losses, have predictably been those that earn much of their revenues in dollars and other international currencies. Pharmaceuticals giant Glaxosmithkline saw a 0.7% slide during morning trading, Astrazeneca dropped by 0.3% and drinks conglomerate Diageo dipped 0.6%.

Natural gas prices have rocketed with Russia accused of managing supply to drive up... END_OF_DOCUMENT_TOKEN_TO_BE_REPLACED

After their valuations boomed in 2020, the UK’s online fast-fashion giants of Asos and... END_OF_DOCUMENT_TOKEN_TO_BE_REPLACED

The dust has almost settled on the months-long takeover battle between U.S.-based private equity... END_OF_DOCUMENT_TOKEN_TO_BE_REPLACED