What will happen to markets and your investments if Putin invades Ukraine?

Until it happens there is hope it won’t. But we are being told Putin has made the decision to invade Ukraine and will do so. Based on comments made over the weekend, the West’s main question now is how far Putin’s Russia will go. Will it be content, for now, with the annexing of more territory in the east of Ukraine in the shape of the Lugansk and Donetsk People’s republics?

Or does Putin want the whole country as payment for what he sees as broken Nato promises to not expand into the parts of central and eastern Europe that were in Russia’s orbit pre-1989?

Whatever happens in Ukraine, the world currently seems set on a course towards a new cold war between the West on one side and Russia and China on the other. Before the Ukraine crisis, tensions between the West and China had been brewing for some time. First economic and more recently around the superpower’s increasing assertion of its geopolitical ambition and flexing of growing military strength.

War in Europe and the inevitable human suffering that would result is, of course, something we should all hope doesn’t come to pass. But it’s only sensible to consider the possible outcomes of worst case scenarios on global economic activity and financial markets.

What is expected to happen if Russia invades Ukraine and there is war? And what if conflict can be avoided or is short-lived but followed by a new cold war that interrupts trade relations built up in recent decades?

The most obvious impact that would result from a Russian invasion of Ukraine would be increased market volatility for a period. Markets are significantly down so far this year with the S&P 500 over 9% lower than it started 2022. But losses and volatility have been far more influenced by fears around inflation than the geopolitical crisis between Russia, Ukraine and Nato.

That’s reflected in the fact the FTSE 100 is largely flat for year while tech-centric major U.S. indices are down. Growth stocks have been the worst hit and because of inflation levels and expected interest rate rises rather than war worries. But

Rising energy prices would be expected to be the most obvious and immediate result of a war in Ukraine. The international community, with the exception of China among major international markets, has vowed to hit Russia with unprecedented economic sanctions if it moves further into Ukrainian territory.

That would involve an embargo on Russian exports, of which gas and oil account for the lion’s share. 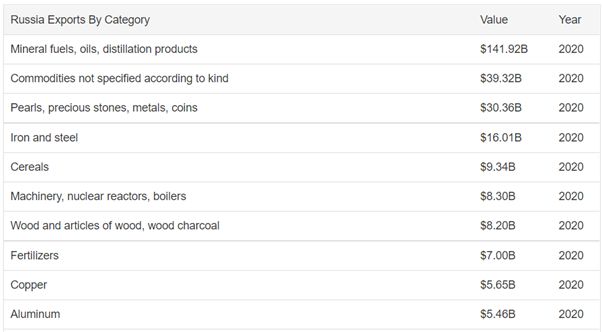 While that would result in short term supply issues for the European countries, especially Germany, most exposed to Russian gas and oil imports, there is enough global supply to compensate mid to long-term. However, Russia’s removal from commodities markets would reduce overall oil and gas supplies, pushing up prices significantly in the short term and probably notably medium term.

That won’t help the current wave of inflation the global economy is struggling to get under control. But it will benefit energy companies like BP (which would also be damaged by the probably loss of its near 20% stake in the Russian state-backed oil company Rosneft) and Shell which have already seen their profits soar in recent months due to higher energy commodity prices that started with falling supplies from Russia.

Many believe that tightening of supply was orchestrated by the Putin regime as a forewarning to Western governments and consumers on the impact of imposing future sanctions.

Commodity prices, especially of commodities Russia is a major international exporter of like iron, steel, copper and aluminium, would also be expected to rise significantly. That will also contribute to international inflation but benefit mining companies who produce those commodities from mines in other parts of the world.

A Goldman Sachs analyst this week noted that metal supplies are currently already depleted and “major exchanges have less than one week’s supply of copper stocks” and that supplies of aluminium (now at a 13-year price high) are also low. The analyst warned, “this is the most extreme inventory environment” and “unprecedented”.

Inflation is already a problem investors are having to deal with and factor into their decisions. The Covid-19 pandemic and years of loose monetary policy since the international financial crisis, ratcheted up to unprecedented levels over the past couple of years is behind the highest rates of inflation in decades.

However, the further increases to energy and metals prices that would be expected to result from conflict in Ukraine would exacerbate the already tricky inflation environment.

It’s unlikely at this stage but a worst case scenario of Russia and China forming a closer economic and military pact, establishing a more self-contained and global economic rival to the West could eventually lead to an embargo on Chinese exports into western economies. That would have a huge impact on supply lines and it’s not clear at this point how manufacturers would cope, though eventually, domestic production would have to compensate.

However, any period of adjustment would be undeniably extremely painful.

Historically, global stock markets drop at the onset of war. When the 1950-53 Korean war started the S&P 500 fell 12.9% but took less than 3 months to recover. The 17% drop in equities when Iraq invaded Kuwait in 1990  took 6 months to reverse. Even the 20% slump on Wall Street that followed Japan’s attack on Pearl Harbour took no more than a year to recover from.

Reuters reports that Truist Advisory Services, the wealth management division of Truist Bank, reviewed 12 historical geopolitical crises including the 2003 Iraq war, the 1962 Cuban missile crisis and 1979 Iran hostage crisis. A year later, the S&P 500 was higher after 9 out of 12 of the events with 6.8% average gains. That’s roughly in line with years without major geopolitical crises.

Unless new precedents are set, investors probably shouldn’t be overly concerned about any long term damage to stock markets if Russia does invade Ukraine. But it will reset the international order and change certain things over the longer term that will affect certain industries and companies.

For broad-based, diversified portfolios adjusted for a high inflation environment, that shouldn’t be a huge problem in the long term but it would be advisable for investors to assess exposure they may have to the sectors and companies that might be negatively impacted over the longer term.

As humans, let’s hope war in Ukraine can still be averted and any bloodshed is minimised or avoided entirely. As investors, do further research to make sure you are not overly exposed to sectors and companies that could be hit hardest but don’t panic.