What’s next for post-Bezos Amazon? Will the internet juggernaut flounder or thrive without its founder at the wheel? 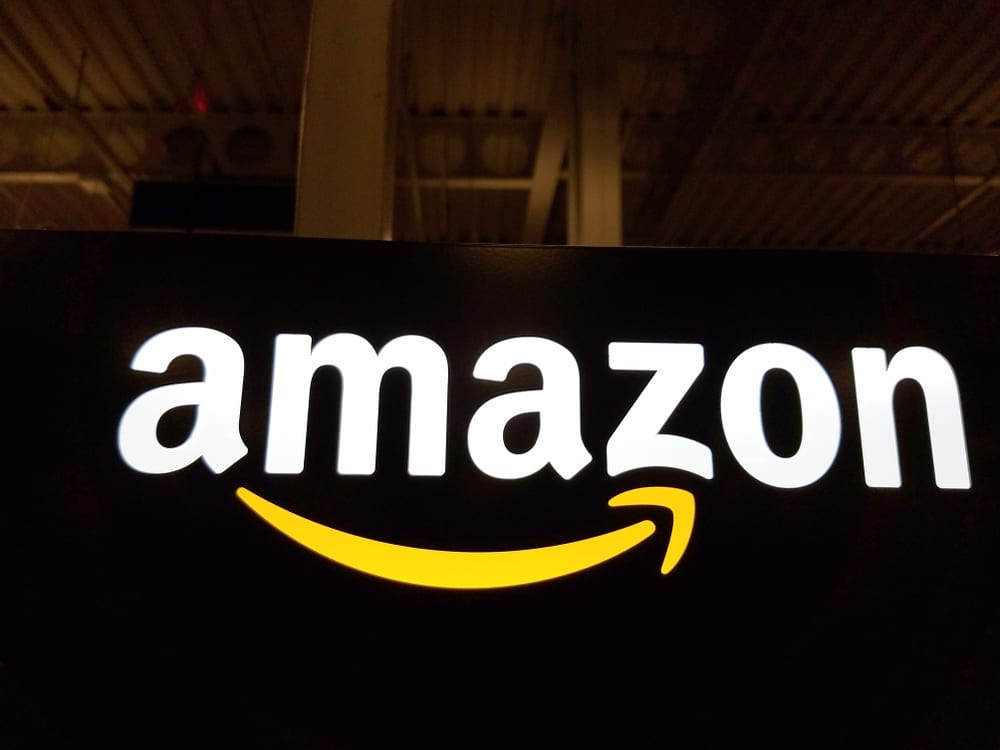 On Tuesday February 5th 2021, five days ago at the time of writing, Amazon founder and chief executive Jeff Bezos made the unheralded announcement he will step back from day-to-day running of the $1.7 trillion company. Since Amazon was founded in Bezos’s garage as an online bookstore in 1994, Bezos’s leadership has been the driving force behind its evolution into one of the most valuable companies in the world.

Over the 27 years since the company was founded it has grown into a true global corporate behemoth. Amazon dominates ecommerce in its domestic U.S. market to the extent that last year it held a market share of 47%, expected to grow to 50% this year. In the UK, Amazon accounts for over 30% of all money spent online for retail purchases.

These figures are even more impressive when considering that not only does Amazon’s share of the pie continue to grow but the pie itself is getting larger. The Covid-19 pandemic led to huge growth in ecommerce over 2020 at the expense of traditional bricks and mortar retail.

Online retail sales in the USA are forecast to have reached $839.02 billion by the end of 2020. That represents incredible 40.3% growth from 2019, as estimated by Digital Commerce 360 estimates. That’s the highest annual U.S. ecommerce growth in at least two decades.

In the UK, ecommerce growth over 2020 is tipped to come in at somewhere approaching 25%. Amazon were the biggest beneficiaries of that growing pie, with UK sales up 51% to £19.4 billion. The company also employs around 40,000 people in the UK. 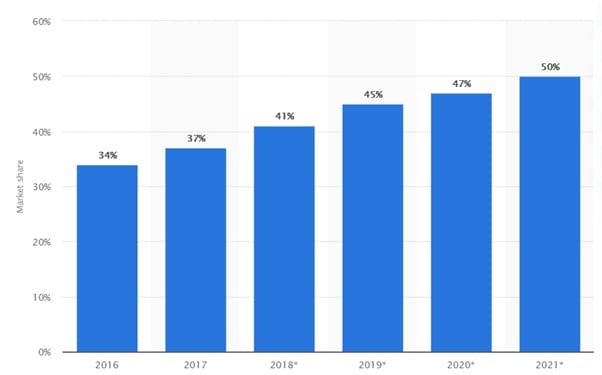 And Amazon is far from resting on its ecommerce laurels. Realising there is only so much market share that can be realistically wrung out of consumer goods from books to electronics, Bezos-led Amazon’s focus in recent years has been creating new ecommerce markets. Online order of prescription pharmaceuticals is one new market the company is developing. And its going head-to-head with the big supermarkets in online groceries shopping.

The company is also the market leader in cloud computing, through its AWS arm. Having taken advantage of its ‘first-to-market’ status, AWS has been growing at an impressive rate for over a decade now. Despite its huge year-on-year growth rate inevitably dropping over recent years, from 35% in Q3 2019 to 29% in Q3 2020, its revenue growth is accelerating. 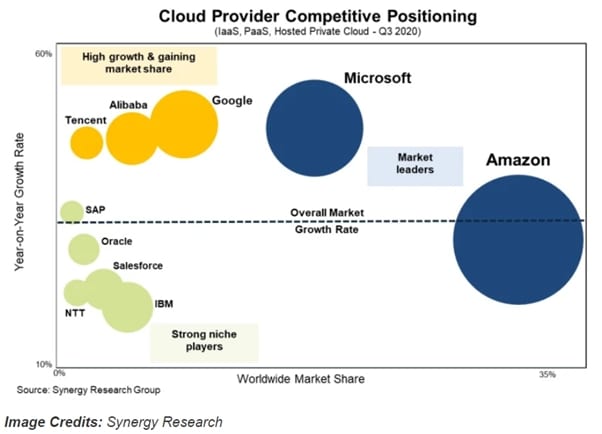 At current rates of revenue growth, it should take Amazon less than 12 months to scale from a run rate of $40 billion to $50 billion. According to TechCrunch, AWS is now the fifth-largest enterprise IT company in the world, ahead of names including Oracle and SAP. 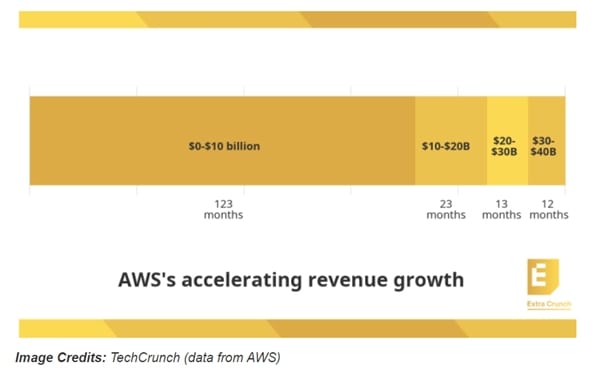 The cloud computing-as-a-service market will almost certainly continue to grow at a fast pace for at least another several years. And AWS’s position of dominance as market leader appears unassailable.

AWS is already arguably even more important to Amazon than its ecommerce business. Despite generating less than 10% of the group’s overall revenues, it accounts for over 50% of profits – the margins are great. And is expected to continue to grow significantly as the global economy moves on to a more digital footing.

Who is Andy Jassy? Bezos will be succeeded as Amazon CEO by the company’s head of cloud computing

In that context, it was perhaps an obvious choice to select AWS boss Andy Jassy, who has also been with Amazon since 1997, as Bezos’s successor as chief executive. Educated at Harvard Business School, Mr Jassy is described by his long-time boss as an “outstanding leader”.

He’s led the AWS cloud computing business since it was established in the early 2000s and has a similar reputation for perfectionism as Bezos, last autumn telling the Silicon Angle website:

“Any time we’re not statistically indistinguishable from perfect, we’re going to be unhappy.” 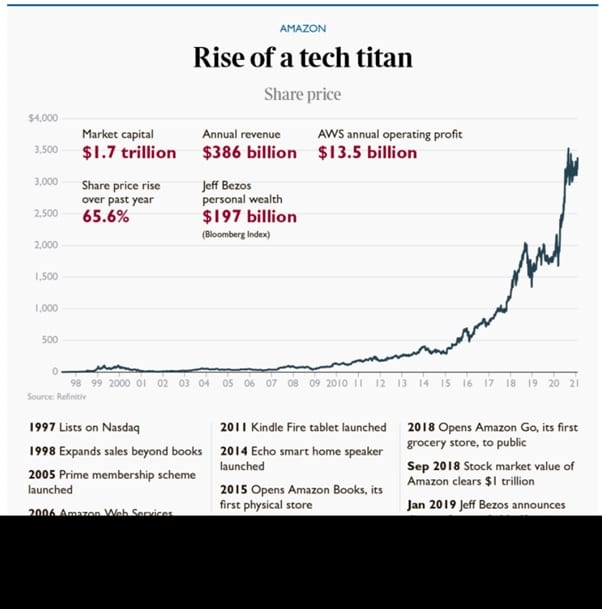 What’s next for Amazon as it embarks on a new era?

It is important to note Bezos has been quick to point out he is not retiring when he gives up the chief executive role at some point during the third quarter. He will stay on as executive chairman and sees his future role, free of the day-to-day pressures of a chief executive of one of the world’s biggest companies, as driving Amazon’s continued “invention”.

That suggest Bezos believes Amazon can continue to evolve in terms of the kinds of businesses and services it offers, and how it provides them. And he wants to focus on that development strategy.

So how could Amazon continue to evolve during its new phase, with a fresh CEO running things day-to-day and its founder and historical CEO working on “invention” as executive chairman? And does it face any major threats to its seemingly unassailable position at the top of the ecommerce and cloud computing piles?

What are the biggest challenges Mr Janny will face, with the support and scrutiny of his former boss casting a large shadow from his executive chairman seat behind him?

Arguably Mr Janny’s most critical priority as Amazon chief executive will also be the one that he is best-equipped to succeed in. Namely, keeping AWS ahead of the competition in the cloud computing-as-a-service market. It is by far Amazon’s best margin business and now its most profitable. And there is still plenty of obvious runway for years more of strong growth.

There’s no obvious danger to AWS’s dominance at present, despite a level of competition from Microsoft’s Azure and the Google Cloud Platform. But Janny’s tenure as chief executive will inevitably be judged on if he can keep it that way. There’s plenty of daylight between AWS and its nearest competitors. The job is maintaining, and if possible, extending that as the market grows.

The extent of Amazon’s dominance of its two main markets, ecommerce and cloud-computing, inevitably means scrutiny by regulators. The latter has yet to attract much heat (though AWS will be acutely aware that may not always be the case). However, Amazon’s ecommerce dominance certainly has.

In November 2020 the European Commission formally opened a competition into Amazon’s business practises and the USA’s federal government is several months ahead in their own probe. Both are focusing on accusations Amazon mines data from the tens of thousands of third-party merchants that sell through Amazon’s ecommerce platform. With it then using that data to launch their own, cheaper copycat products. Amazon vehemently denies doing anything of the sort.

But it is inevitable a regulatory noose is tightening and Amazon realises it. There is genuine concern in the company’s biggest ecommerce markets that the extent of its dominance has and is strangling competition.

Mr Janny’s goal will not be to escape any kind of regulatory crackdown. That’s unrealistic. But he will be judged on whether he succeeds in watering down new regulatory restrictions.

The company already spends more on full-time lobbyists in Washington, $13.7 million-a-year, than any other except for Facebook. The chances are Janny will seek to ramp that up further in an attempt to hold the regulators at arms-length.

With over 150 million subscribers paying $120-a-year (£79 in the UK), Amazon’s Prime loyalty programme is described as the company’s ‘engine’. It brings in $18 billion only from subscription fees and members also spend more on Amazon.

For years, Amazon has been focused on making Prime membership ‘indispensable’ by continuing to add value. Live sports and television and film streaming is one big perk but so is same-day delivery. That was compromised early in the Covid-19 pandemic as Amazon couldn’t keep up in the surge in demand.

A decision to prioritise essentials such as sanitary products and food, for anyone ordering regardless of Prime membership status, saw members suddenly waiting longer for orders than they’d grown accustomed to. That saw rivals pick up some market share and the company’s recent hiring spree was a response to that.

Capacity has now been hugely increased. And perhaps the biggest strategic motivation to that has been keeping Prime members happy. We can expect Janny to also prioritise a continuation of the strategy of adding more and more value into Prime, in an effort to lock those hugely valuable subscribers in.

Bezos is famously anti-union and put a lot of effort into keeping them out of Amazon. However, it’s a battle that is becoming more difficult with each passing year. The company’s employee numbers have grown 500% in five years and it rejects accusations of poor working conditions, pointing to the fact its own minimum salaries are significantly above national minimum wage requirements everywhere it operates.

However, there are accusations of a high-pressure working environment where productivity levels are constantly being pushed by management. Some employees have complained of a surveillance culture where every move is monitored.

But unionisation, especially in warehouses and delivery, would spell trouble for Amazon and one of Janny’s goals will be to retain the no-unions status quo.

The next big business – Amazon Shipping

It’s relatively common knowledge Amazon is preparing to launch its own shipping company that will not only deliver all of its own products but will operate commercially. FedEx, UBS and the world’s other big courier services, especially their investors, are rightfully nervous.

The plan is to automate as much of the shipping process as possible, with a focus on the labour-intensive ‘last mile’ of deliveries from local logistics hubs to final destinations. That, believes Amazon, will allow them to undercut rivals on price.

Unlike cloud computing, shipping is a low margin business. But so is online groceries shopping and takeaway meals delivery. Amazon might be delighted with AWS’s margins but that seemingly hasn’t quelled its appetite for big, low margin sectors. If it sees a pathway to automation. And shipping is intended as the next conquest. It will also likely be the first major new Amazon business to launch under Janny’s watch and he will be determined to make a success of it.

Asian shares near record highs on hopes of US aid package