Where to invest the cash being furiously whittling away by rising inflation?

With most major stock markets around the world spending time at or near record highs despite the knock to the economy caused by the Covid-19 pandemic, investors could be forgiven for having taken the step to lock in some profits. Converting some assets into cash for a tidy profit is often a sensible move when markets looked stretch. It can both lock in returns and offer some nice liquidity to take advantage of bargains if markets then do subsequently suffer from a period of losses.

Before the pandemic struck, many stock market analysts had started recommending investors increase their cash holdings to hedge against expensive looking markets suffering a major correction. Of course, they did, with major indices including the FTSE 100, FTSE 250, S&P 500 and Nasdaq plunging by up to almost 40% between mid-February and March 2020 as the Covid-19 pandemic first struck.

While investors who had moved some of their portfolios into cash were presented with a window of opportunity, it was a short one as the sell-off proved short lived. By November last year the major U.S. indices had recouped losses and have since been on a strong bull run only occasionally interrupted by periods of pandemic-induced volatility. 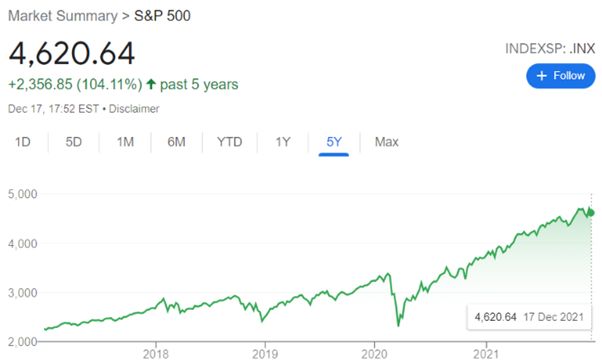 Some investors may have reinvested cash holdings over the past year and a half and would probably have done well doing so if tracking the market or the sectors and stocks to have benefitted from the pandemic, such as technology stocks. However, if you are one of the investors to have ridden the bull run over the past 18 months or so, it would be natural to again be wondering if markets may not again be heading for a correction after months of relatively steady and strong gains.

Other investors may well still be holding onto cash. Put off from trusting hard won profits from previous years to the uncertain environment of a pandemic stock market that looks overheated. A third category may be new to investing altogether, so far only holding savings in cash.

But with the UK’s inflation rate topping 5% in November and now forecast by the Bank of England to peak in April at over 7%, holding cash currently sounds like a terrible idea. It’s not impossible that by some point next year its purchasing power could decline by not a great deal less than 10%.

And even if inflation does dip from April on, though recent BoE inflation forecasts proving much more optimistic than reality proved doesn’t instil full confidence, a majority of economists now expect higher levels than we have been used to for some time persisting. For the foreseeable future, holding cash is probably going to mean losing money.

Investing in an expensive-looking stock market certainly entails an element of risk. But with cash balances all but guaranteed to result in relatively steep losses next year and possibly well beyond, investors could turn to the stock market to keep up with inflation by investing in sectors and companies best placed to be able to pass it on to end consumers, maintaining margins. Or, better yet, even benefit from higher inflation.

The banking sector is perhaps the most obvious investment for a higher inflation environment. The revenue generation potential of banks which make a majority of their income from lending is directly correlated to interest rates. When the Bank of England last week took the surprise decision to hike interest rates to 0.25% from 0.1%, the major London-listed banks all saw their valuations climb. The Barclays share price gained over 4% between Wednesday, when the rates rise was announced, and Thursday.

Since interest rates were driven down to rock bottom in the wake of the financial crisis over a decade ago, banks have seen their net interest margin, the difference between the rate they pay to savers and can charge borrowers, squeezed. Higher interest rates will improve that margin, making banks more profitable as rate rises are passed onto savers with a delay, and to a lesser extent.

London-listed banks also look set to benefit from the Bank of England relaxing affordability tests for mortgages, increasing the amount home buyers can borrow. That adds more risk to bank balance sheets but also improves profitability. UK banking stocks are also still around 20% below their pre-pandemic levels, making them look currently quite cheap.

Investors keen on exposure to the banking sector could either stock up on individual banking stocks. A less direct route would be to invest in the FTSE 100 index which is heavily weighted towards the financial services sector.

The technology sector has driven stock markets gains for over a decade now and returns have been particularly strong since March last year. But tech stocks also look very expensive so are they still a good bet for investors whose main aim is to keep pace with inflation?

Tech stocks have certainly done well in the low-inflation environment of the past two decades, with the MSCI information technology index up almost 580% over twenty years. Inflation over the same period has been about 54%. However, that’s still ahead of an investment in the FTSE 100, which has gained just 43% in 20 years.

A cheap option for exposure to the tech sector would be a Nasdaq index tracker, or an MSCI Information technology index tracker for less U.S.-centric investment. There is also a wide choice of managed funds for investors willing to pay more and put their faith in a professional stock picker.

Another route many would consider lower risk would be to pursue more dividend stocks in sectors unlikely to be hit hard by higher prices. London-listed pharmaceutical giants AstraZeneca and GlaxoSmithKline look like strong dividend options. As does drinks company Diageo, consumer goods companies like Nestle and Unilever and even the credit ratings agency Experian.

However, companies and governments selling debt don’t offer inflation-linked security cheaply and returns are minimal. There’s also a strong argument inflation-linked bonds would have been a much better investment a year ago, before the current inflationary cycle kicked in and raised demand, driving down yields.

An investment in inflation-linked bonds now could prove wise if inflation continues to spiral next year. But if markets conclude over the first months of the year that inflation will start to ease, the timing of investors buying into the asset class now could backfire.