Why are EV stocks suddenly in reverse while traditional automakers roar ahead?

Despite a bad start to 2022 when it has been caught up in the overall equities sell-off, it has been a pretty good 12 months for Ford investors. The automaker is up over 90%. Up until a slide from the middle of January, Ford’s gain in valuation since the same time last year had been well over 100%.

Before Ford’s recent surge in value, other than a blip last summer the share price has been rising quickly since April 2020, it had been in a pattern of long term decline stretching back several years. 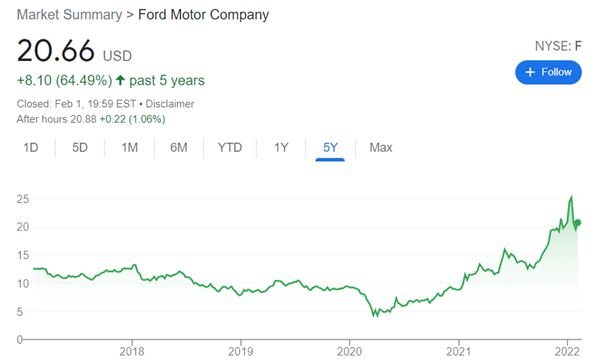 General Motors, another of the big traditional U.S. automakers, has seen a similar pattern, though its recent peak in valuation came earlier, last summer.

Meanwhile, listed EV companies, many of whom have gone public over the last two years,  have recently seen their valuations take a hit. Tesla, the EV sector’s poster boy, is down by over 24% in 2022. 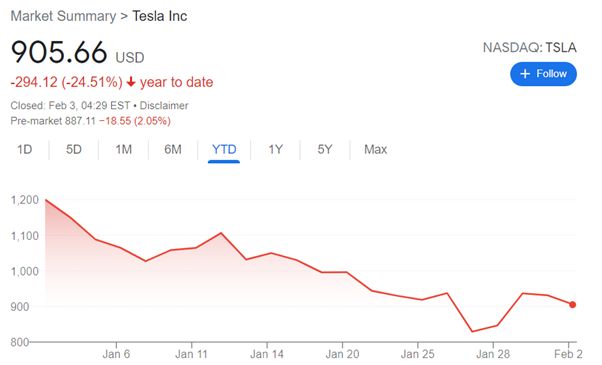 Tesla’s slide is not the result of poor performance. The company announced record quarterly results in January that were ahead of analyst forecasts and generally accepted as strong. As was forward guidance for 2022, despite the caveat supply chain issues are expected to continue to cause issues.

Tesla’s drop in valuation over early 2022 is because markets are generally selling off risk and it has always been an expensive-looking stock heavily dependent on the value of future sales. And quickening inflation and rising interest rates mean those future revenues are suddenly worth less.

There was also the somewhat disappointing news that production of the company’s Cybertruck won’t start until at least next year. But Tesla does generate revenue; even a profit recently, though it is one massaged by the fact it sells carbon credits to traditional rivals still manufacturing petrol and diesel engine vehicles.

Many other listed EV manufacturers don’t yet have much in way of revenues, never mind profits. Some don’t even have vehicles being manufactured and are still developing their models.

Their future profits are, of course, of an even higher, sometimes much higher, level of risk than can be ascribed to Tesla’s. Lordstown Motors, which is developing an electric pickup truck whose production won’t begin until, hopefully, the second half of this year, listed via a 2020 SPAC that valued it at $1.6 billion. It’s currently worth a little over $600 million and its share price has lost over 87% in the past year. 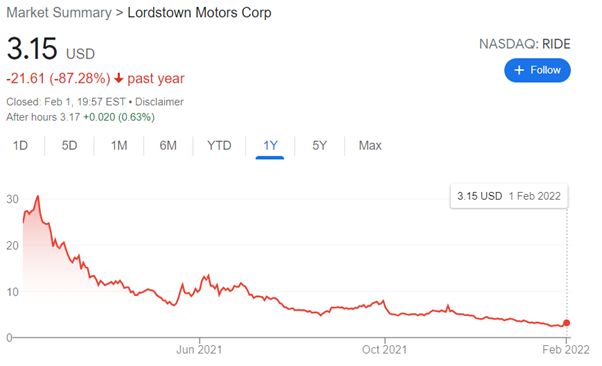 But Lordstown is small fry compared to another EV company with almost no revenue and no vehicle sales expected until 2023. Despite that, and an early 2022 decline in valuation by more than 37%, Rivian is still worth a colossal $58 billion. 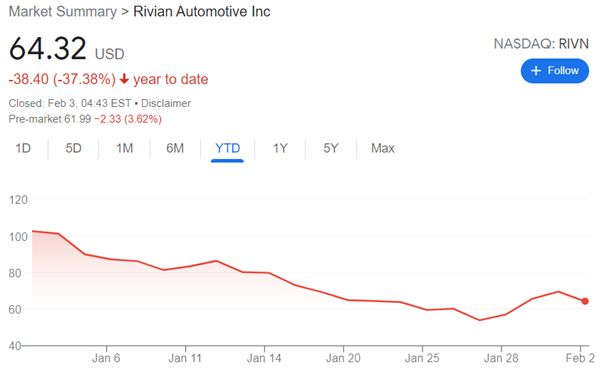 In the next three years, the company intends to build a second manufacturing plant in the state of Georgia, which will start production in 2024. The target for this plant is up to 400,000 per year at some point in the future, compared to 200,000 in Normal, Illinois. after the upgrade of the site from 150,000/year currently).

Before the end of this decade, Rivian would like to produce and sell at least 1 million electric vehicles per year.

All of which is great but Rivian’s valuation, even after its recent slide, doesn’t reflect a lot of risk future production and sales figures for short of those ambitions. Or that the profit margins expected may not meet expectations. The company’s market cap is very much leveraged on the best possible outcomes.

Which is the case for almost all EV companies. And their valuations are now sliding because investor appetite for risk is declining and uncertainty is starting to be priced in.

However, what appears to have been missing from the calculation is that EV start-ups also have to invest in developing EV technology, supply and manufacturing lines. And they are doing it from the ground up with no legacy experience or systems.

Starting from scratch can sometimes be an advantage. For example, digital-first banking and other financial services start-ups have been helped by not having to grapple with running new digital apps and platforms alongside and unavoidably integrated with sprawling and creaking legacy IT systems, like their traditional peers attempting “digital transformation”.

But the same logic doesn’t necessary apply to traditional automakers pivoting to new lines of EV models. Only having to update existing supply and production lines for EVs is less expensive and time consuming than building them from the ground up as the start-ups are doing. Traditional automakers also have established distribution and sales networks built up over decades that won’t need to meaningfully change because of the switch to EVs.

Their investment in the pivot to manufacturing EVs is also being largely financed or underwritten by profits made selling petrol and diesel engine vehicles. Morningstar’s Goldstein sums it up with:

“I think this is the market realizing the traditional automakers can and will make EVs. Startup valuations seem to assume many of them would be 100% successful in profitably ramping up a prototype product, when many of those companies had never successfully mass manufactured a vehicle before.”

The valuations of traditional automakers are now being rewarded, not punished, for investment in pivoting to an EVs future – a seachange in market sentiment compared to previous years.

Investors are also being convinced by the EV models being released by traditional automakers, many of which lean on well-established brands and are expected to be popular with drivers. Whiston reels off the list:

“There are Cadillac offerings starting in a few months with the Lyriq crossover, and they are offering BEV pickup trucks now and in the near future with the GMC Hummer, Chevrolet Silverado, GMC Sierra, and Ford’s F-150 Lightning. Also, Ford put its iconic Mustang name on a EV over a year ago with the Mach-E. These are the most important and profitable vehicles both firms sell, especially the full size pickups.”

While EV start-ups do have some advantages over their large, traditional rivals such as undoubtedly being potentially nimbler and faster moving in how they react, markets are now downgrading the edge that is expected to confer.

The result is improving fortunes for the valuations of traditional automakers and a correction, which could prove to be a deep one, for EV start-ups. Especially those whose valuations were most based on optimism over future prospects rather than production and delivery numbers, revenues and profits today.