Why do so many analysts see such good long term potential for the Spotify share price?

Spotify is a rare example of a technology company that leads a big and quickly growing market, audio streaming, but is from Europe and not the USA. But Sweden’s Stockholm-based Spotify is just such an exception. Entertainment intelligence firm Midia calculated that as of Q2 2021, Spotify held a 31% share of the global streaming music subscription market. 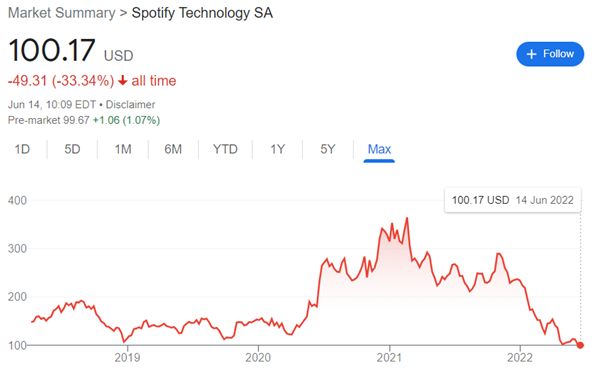 Apple Music and Amazon Music had less than half Spotify’s global music subscription market share with 15% and 13% respectively. Tencent Music, the most popular service in Asia also had 13% of the global market, putting Spotify well out in front. 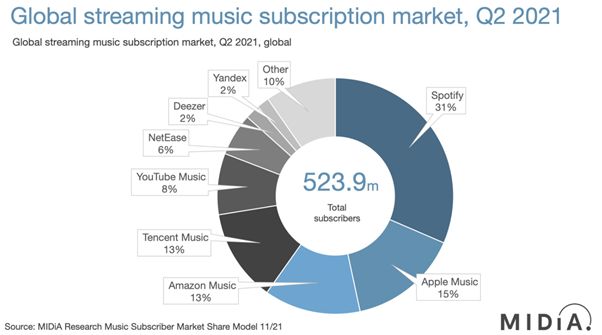 Midia’s research indicates there were at total 523.9 million music streaming subscribers last year, which would mean Spotify had a little over 162.4 million paying customers. The company’s own official figures at the time claimed 165 million, suggesting the intelligence company’s figures are not far off the mark.

Despite its impressive lead over rivals, however, Spotify’s market share dropped from 33% in 2020 to 31% last year (2022 figures are yet to be released). But the company is growing revenues at a quick pace, with annual revenues for 2021 up 22% year-on-year to €9.66 billion.

However, despite, or arguably because of, its rapid growth, the company has yet to record a profit despite being established in 2006. Last year it lost €39 million, a significant improvement on the €581 million lost in 2020. Its biggest ever loss was €1.235 billion in 2017. 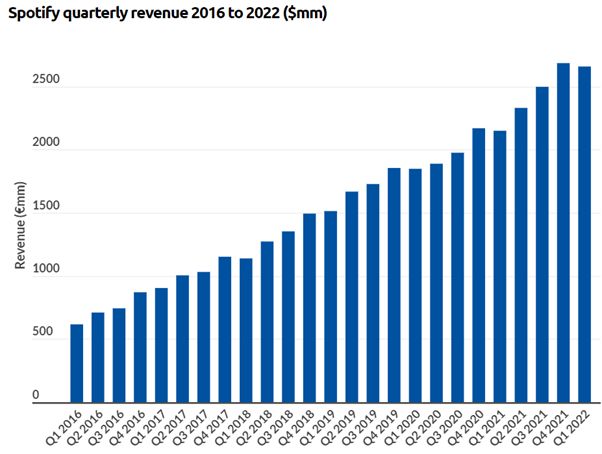 The company had 121 million users in Europe last year, 85 million in North America, 78 million in Latin America and 71 million across the rest of the world.

GrandViewResearch expects the music streaming market to continue to grow at an impressive rate until at least the end of the current decade. In the USA, CAGR is expected to average 13.3% and 14.7% globally across North America, Europe, Latin America, Asia Pacific and the Middle East and Africa. 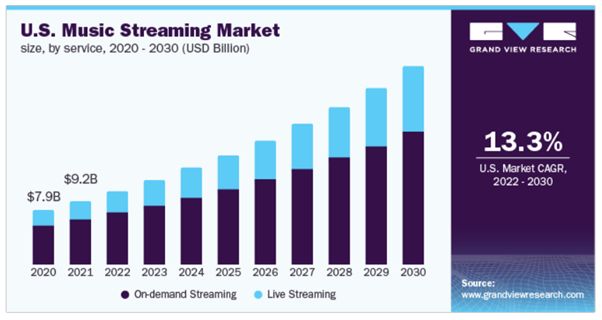 Spotify’s strong position as the global market leader should put it in a strong position to capitalise on that market growth. The company also continues to add new content (podcasts are a particular focus) and services.

Last week Spotify’s CEO and founder Daniel Ek told investors the company is targeting annual revenues of $100 billion by 2030, which would represent almost 10 times what it made last year. A gross margin of 40% and operating margin of 20% is also being targeted.

That will be achieved, said Ek, by Spotify dominating the quickly growing market for podcasts, a move into audio books this year and a number of other new product launches.

While most analysts see Spotify’s goal as highly ambitious it is not considered impossible. The company’s share price rose 10% after the investors’ day that saw Ek announce those impressive targets but it has since given those gains up.

Like most growth stocks, especially those still to realise a profit, the Spotify share price has been hammered this year and is down 60%. It’s down a whopping 73% since its record high of $364.59 set on February 19 last year and currently trades at just shy of $100.

Is the Spotify share price cheap at its current level?

Do Spotify’s recent valuation travails represent a good long term buying opportunity for investors? 28 analysts who cover the stock surveyed by MarketWatch have an average price target of $140.95 for the Spotify stock and rate it as overweight, which means they think it is currently undervalued by markets.

If they are right, the Spotify share price has 41% upside over the next 12 months or so at its current price. Given the current economic woes gripping the global economy and very limited appetite for risk being shown by investors in the face of quickly rising inflation and interest rates, it could quite conceivably take longer than twelve months to reach that price target. But for long term investors, that wouldn’t be an obstacle. And if the company meets Ek’s goal of $100 billion in revenues and a $20 billion operating margin by 2030, the company’s valuation will undoubtedly dwarf its current levels.

But how likely is that to happen?

Why has the Spotify share price fallen so much in 2022?

Spotify’s valuation has undoubtedly been hit this year by overall market sentiment, especially towards growth stocks. Even the tech giants like Amazon, Apple, Alphabet and Facebook, which have driven much of the entire stock market’s gains in recent years, have taken a battering. They are down by 40%, 27%, 27% and 52% respectively over the year-to-date.

Netflix, Spotify’s equivalent in the television and film streaming sector, is down 72% this year.

However, there are also a handful of other factors that have put investors off. In January, the company was caught up in the Covid-19 misinformation scandal that engulfed star podcaster Joe Rogan. There are also worries over the lack of significant improvements in gross margin over the past two years, continued failure to achieve GAAP profitability and the decision to not offer forward guidance for 2022 results leading to fears they will be weak.

But despite challenging market conditions and some bumps in the road, Spotify’s long term prospects look solid to very strong. There are several factors in Spotify’s favour when it comes to its chances of reaching that $100 billion revenue target over the next seven and a half years. Even making a good fist of it but falling not too far short would be considered a major success.

Podcasts are the first. It’s a quickly growing market that Spotify is leading by investing in star names like Rogan and the Duke and Duchess of Sussex. Between 2019 and 2022, Spotify’s podcast library has grown from under 500,000 to over 4 million. More importantly, engagement is growing. In 2018, just 7% of Spotify users listened to a podcast, which had increased to 30% by this year. That’s great growth but still leaves room for more.

And of the top 10 most listened to podcasts on Spotify, 6 are exclusive to the platform, helping it create a moat to protect its market share from competitors. CFO Paul Vogel also believes gross margins from podcasting can reach 40%-50% over the long term from their current level of 30%. Overall the company’s gross margin was 28.4% over Q1 2022 for subscribers and -1.5% for freemium users that listen to ads.

Spotify also benefits from impressive customer loyalty, suggesting it has a winning product. Premium subscriber churn decreased from 5.5% in 2017 to 3.9% in 2021 and 2.4% in developed markets). 96% gross retention of paid subscribers is extremely impressive, almost unheard of, for a D2C business as large as Spotify.

Spotify’s new foray into audiobooks, challenging Audible, should also be highly profitable if successful. And with such an engaged userbase already and the company’s strong record in innovation, there seems to be no obvious reason why it would not be.

Analyst Andrew Marok from the U.S. investment bank Raymond James also believes Spotify’s stock has been oversold by being lumped in with concerns over the video streaming sector, which he sees as an over-generalisation, commenting:

“On the [music] side, the dynamic where the major labels own a significant majority of the content, and are also basically dependent on the streaming platforms such as Spotify and Apple Music to power industry growth, makes that a much more stable contingent.”

That also means audio streaming services are unlikely to get into the kind of price war currently affecting the video streaming sector.

An investment in Spotify is not without risk. Its biggest competitors, Apple, Amazon and Alphabet (via YouTube) all have more cash on their balance sheets than Spotify’s entire current market capitalisation. If they throw money at audio streaming, Spotify would face a stiff challenge to maintain its market lead. However, all three appear to have other priorities and while audio streaming is important to them, it is not their exclusive focus as it is for Spotify, which should prove an advantage.

The company has had a tough time since making its public markets debut in 2018. Its brand and user base strength are recognised but investors are sceptical of the company’s ability to significantly improve its gross margins and turn a healthy profit. But Spotify itself seems increasingly optimistic and has historically delivered on its promises to investors.

Even if it doesn’t hit its ambitious targets over the next decade, at its current valuation downside seems limited. And if it does, or gets a good way towards them, the upside could be huge.