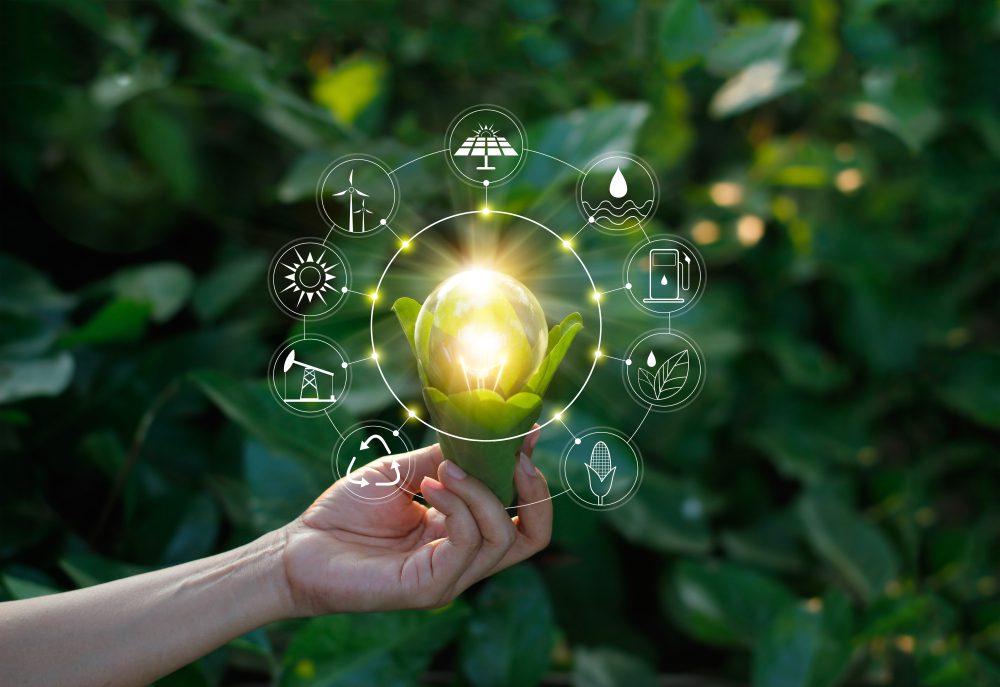 Natural gas prices have rocketed with Russia accused of managing supply to drive up prices and put Europe over a barrel in negotiations around the Nordstream 2 pipeline many worry deepens EU reliance on Russian gas. In Europe, gas prices have increased by about 130% since early September. Coal costs are also soaring and there are predictions oil could soon hit $100-a-barrel again.

Rolling blackouts are already hitting parts of China with energy supplies unable to keep up with a resurgence in factory activity that dropped due to the Covid-19 pandemic. Coal-fired  Indian power plants are struggling to buy enough fuel to keep the lights on. And European governments are trying to figure out how to insulate consumers from spiralling energy costs without racking up more debt to add to the borrowing that prevented economic collapse during pandemic lockdown periods. 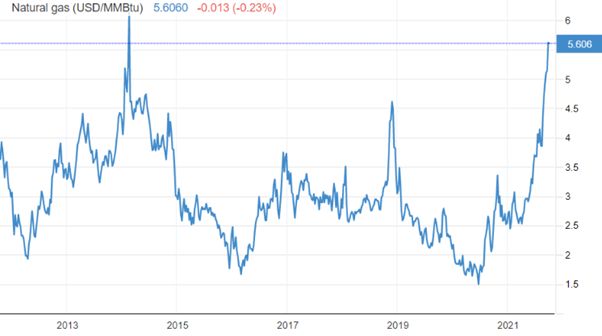 We are, it is now widely acknowledged, in the midst of a poorly-timed energy crisis. The question is how long might it last and how badly it will hit industry, governments and consumers. There is concern energy-intensive manufacturing may have to be paused during the winter months if costs rise too high, dealing a new economic blow to economies already reeling from the pandemic.

The situation is severe enough that central banks and investors are more than a little nervous, with the impact on already concerning levels of inflation the main worry.

What has caused the energy crisis?

The root of the problem lies in supplies of LNG – liquified natural gas. Unlike the oil market, which has been traditionally rebalanced by major producers like Saudi Arabia and its Opec+ partners increasing production when supply and reserves become depleted, there is “no Saudi Arabia for gas”.

That’s how Jim Burkhard, head of crude oil, energy and mobility research for HIS Markit, put it succinctly this week when he forecast:

“There’s “no immediate relief in sight…this looks like it’s going to endure for the winter in the Northern Hemisphere.”

There aren’t particular supply issues for coal or oil but their prices are being driven up by the spike in gas prices because buyers are switching to them if they have the luxury of the choice. But why is LNG suddenly in such short supply?

Gas supplies were initially depleted as a result of a particularly long winter across the northern hemisphere. Snow into April in some regions and unseasonally chilly temperatures elsewhere meant heating was kept on for longer, and higher, than usual.

Under normal conditions, the system would have just about coped with LNG supplies gradually brought back into equilibrium once spring temperatures saw heating turned off. But at the same time, China’s appetite for gas also quickly accelerated.

Around 70% of the country’s powerplants still rely on coal but investment has been withdrawn and authorities have been gradually closing coal mines and power plants for a number of years now and disincentivising investment.

One major side effect of the coal crunch in China is that the country started buying up huge volumes of LNG in September. It had upped imports earlier in the summer but then there was a pause to buying in the hope that quickly rising prices would come down. By early last month Chinese buyers had decided they wouldn’t, so started buying in bulk again anyway, exacerbating global shortages and especially those afflicting Europe.

Which countries are most vulnerable to gas price rises?

The energy crisis won’t affect all geographies equally. European gas prices have risen by over 130% since the beginning of September compared to 85% in East Asia. In the USA energy prices are at a 13 year high but cost inflation is much less than elsewhere as the region is a net exporter of natural gas. Increases are less about any detoriation in supply flow and simply a repercussion of global markets moving upwards.

The UK has seen by far the steepest natural gas price rises in Europe, over 500% on the wholesale price since the beginning of the year, because our electricity production relies heavily on gas. National Grid data from the past week shows 51% of our electricity was generated by burning gas with the rest split between renaewables (Wind, solar and hydroelectric) at 25%, nuclear just under 12% and coal a little over 1%.

Last October 38% of the UK’s electricity was generated with gas – significantly less than now but why are we relying more on gas at such an inopportune moment? 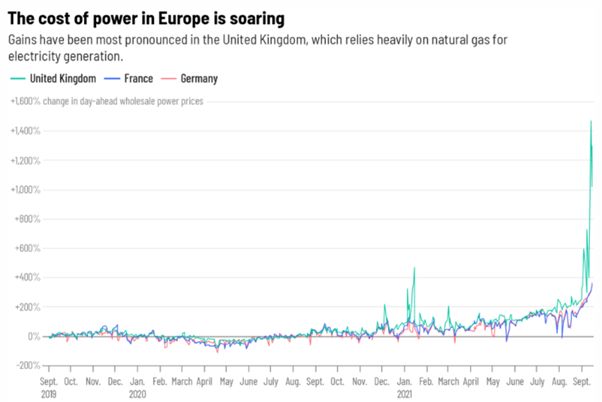 The main reason is the amount of energy generated by nuclear has almost halved since this time last year due to several reactors being offline for unplanned maintenance. France, for example, generates 71% of its electricity from nuclear and just 10% from gas meaning consumers and businesses are much more insulated from the price rises. Recent wind speeds have also been lower than seasonal averages, which has increased the amount of gas needed to keep the lights on.

How long is the energy crisis expected to last?

The good news is the energy crisis is unlikely to last for too long as the gas supply disbalance should eventually ease. How long that will take, and how bad things might get before they improve, will to a large extent depend on luck with weather conditions over the coming winter.

A milder than average winter would allow for stocks to recover and price pressure would then be expected to start easing in early 2022. A cold winter, however, could have major consequences for industry, especially in the UK. Henning Gloystein, director of the energy, climate and resource team at Eurasia Group, a consultancy, recently wrote in a note to clients:

“The UK is arguably at the highest risk of Europe’s major economies of a winter supply shortfall. Should this happen, the government would likely demand factories to reduce output and gas consumption in order to ensure household supply.”

Investing for the energy crisis – the opportunities

In the best case scenario, energy-intensive production will be a lot more expensive over coming months. In the worst-case scenario, energy-intensive manufacturing could be limited, hitting output. Both scenarios will hit the bottom line of companies with affected operations and that will feed through to investors. Companies that produce steel, paper, glass, cement, ceramics and chemicals are among those that can be expected to be worst affected.

But will there also be other sectors and companies that could benefit?

Energy companies like British Gas-owner Centrica could, says Jefferies analyst Ahmed Farman, benefit in the long run from the failure of smaller energy companies unable to absorb rising prices. That, he said, could mean about

“one million customers requiring a new supplier at a time when larger suppliers are reluctant to take new customers, given the gap between bills and the cost of supplying energy”.

However, while there is shorterm downside for large suppliers, Farman thinks industry consolidation could work out well for them longer term. The Centrica share price, up over 25% for the year with those gains achieved since August, reflects the fact markets see what is happening as a long-term positive for the company. 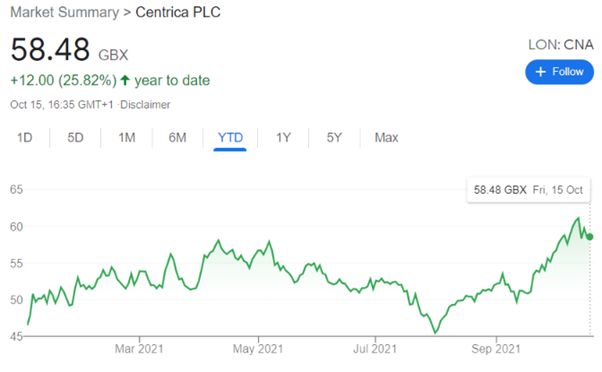 There is an expectation the UK energy market regulator, which has favoured a highly competitive energy provider landscape with low barriers to entry, will now adapt its policy. Providers may well be asked to keep more cash on their balance sheets as a buffer to volatility in energy commodities prices, which will work in favour of larger companies. Another possible response by the regulator to the current crisis would be to allow energy providers to make higher margins to better insulate them against energy commodities price volatility.

Higher margins would better allow energy providers like Centrica to pay dividends, which is likely to boost their share prices in the longer term.

What about energy producers? There aren’t many pure-play gas companies on the London stock exchange, or in Europe. But oil producers like Shell and BP also produce gas, which means they will benefit from the current price spike and both have seen significant valuation rises since September. 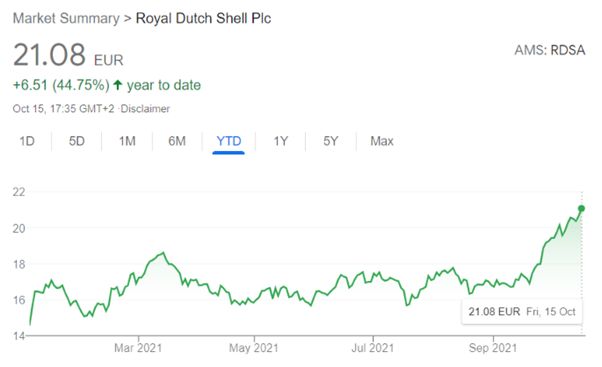 James Smith, manager of the Premier Miton Global Renewables trust, believes companies in low-carbon infrastructure will benefit as they can currently sell electricity at higher prices while their generation costs remain the same. Many renewables infrastructure trusts fix the price of much of the energy they sell so don’t have much upside or downside to wider energy market price swings, but there are exceptions.

Smight highlights Greencoat UK Wind as one as it sells most of its energy to the market at relatively short-forward terms. He also thinks Drax, the company behind the Yorkshire power station of the same name will do very well. Drax also has a hydropower storage business that could benefit, as does SSE which also sold its retail energy business last year – something that now looks like a particularly good strategic move.

The new but growing energy storage sector should also be a winner. For example, the listed fund Gresham House Energy Storage owns giant batteries and charges the grid for it helping to balance energy flows. It may now also take the opportunity to trade energy to exploit price swings.

Do bruised fast fashion valuations mean now is the time to invest in Asos and Boohoo?