Why have London-listed stocks outperformed their Wall Street peers this year?

Over the past several years, the London Stock Exchange and Wall Street have experienced contrasting fortunes. Until the first days of January this year, the major New York indices, the S&P 500, Nasdaq and Dow Jones industrial average had, with the exception of a 33-day bear market when the Covid-19 pandemic struck in early 2020, been on an historical bull run since 2009.

Between lows recorded in March 2009 and its peak in mid-November last year, the tech-heavy Nasdaq index returned around 1000%, before compounded returns from reinvested dividends. 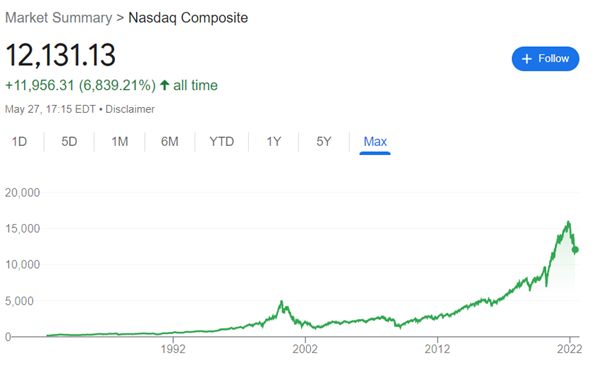 Over the same period, London’s large cap benchmark FTSE 100 index provided investors with less than 100% returns before compounding. In short, FTSE 100 investors did around 10 times worse than Nasdaq Composite investors.

This year, however, that trend has reversed. Despite gains of almost 6.5% last year, its best return since November 2020, the Nasdaq is still down over 23% this year. The FTSE 100, meanwhile is up a little over 1% for the year.

Why has the London Stock Exchange’s benchmark index suddenly come into its own to outperform American peers?

London-listed equities suffered from Brexit uncertainty over the years in the run-up to the pandemic. Despite the fact most of the FTSE 100’s constituents do not earn a majority of their income in the UK in pound sterling but internationally in other major currencies, international investors shunned London-listed companies, nervous of the potential fall-out of the surprise Brexit referendum result.

That saw valuation gains not only fall far behind those on Wall Street over the same period but also behind major European exchanges with a more comparable mix of companies. As a result, many UK companies have traded at significantly lower multiples than comparable firms on other major exchanges in recent years.

With Brexit uncertainty having now largely fallen off the radar of international investors, many have started to view London-listed companies as representing attractive comparative value compared to international peers. That has helped prop valuations up this year and seen the valuations of companies fall less than peers listed elsewhere that started the year at higher multiples.

Another factor in London’s favour this year has been the heavier weighting on the exchange, and especially within the FTSE 100, of companies in traditional “old economy” sectors like oil and gas, mining and banking. And the fact the exchange has far few “growth stocks” listed on it – something seen as a significant weakness in recent years.

Growth companies, particularly tech and biosciences firms, have been hugely popular with investors over the past decade and were especially so last year. The spectacular increase in the market capitalisations of the largest U.S. technology companies, like Apple to over $3 trillion late last year, have driven the majority of gains across the major U.S. indices since 2009.

Rising inflation, and interest rates, have seen the valuations of growth stocks take a battering this year, pulling the major U.S. indices down. London’s lack of large, high growth tech companies has seen it avoid that drag this year.

On the flip side, London has a heavy weighting towards large oil and gas companies and miners. A surge in demand for energy commodities as pandemic restrictions were dropped throughout last year was already driving energy and industrial commodity prices up. That trend has been intensified this year as a result of Russia’s invasion of Ukraine.

Energy and industrial commodity companies have, in other words, had a 2022 that is a mirror-image of that experienced by growth stocks. Commodities being priced in dollars has given London-listed companies selling them an additional boost. On December 31 2021 $1 was worth 74p. Now $1 buys almost 80p. That is a lift to the bottom lines of companies earning revenues in USD but reporting in pound sterling.

The dollar has strengthened so much this year because the Federal Reserve has raised interest rates relatively aggressively to control inflation and is expected to continue to do so throughout this year. It also historically strengthens during periods of global economic turmoil or geopolitical tensions because investors see it as a safe haven.

Many currency market analysts believe the pound is likely to weaken further against the dollar over the rest of the year. However, that introduces risk investors should be aware of. A weaker pound increases import costs and could well further contribute to inflation levels in the UK, which traditionally peak higher than in the USA.

The past few months have offered a number of refresher lessons UK-based investors should take onboard. Firstly, we’ve been given a valuable reminder that “old economy” sectors still have value as part of a balanced investment portfolio and can help reduce volatility when the economy hits a sticky patch.

We’ve also been reminded that diversified exposure to different currencies is important to reducing volatility, which improves long term gains. Having too much exposure to one currency increases risks unnecessarily. And that markets are cyclical. No one sector remains in the ascendancy forever.

Finally, U.S. equities could currently represent much better value than they have for quite some time. Investors who have recently done well from holdings in energy and mining stocks might consider re-allocating some of those recent profits to the healthiest looking American growth stocks again. They will eventually come into favour again as this market cycle ends and energy and commodity prices are almost certain to ease again throughout this and into next year.