The Kellogg’s share price opened to losses of almost 3% today after the maker of Corn Flakes and Special K announced yesterday that it will split into three companies. The share price originally closed 2% up on Tuesday after the company first informed shareholders and the market of its intentions but those gains have been quickly neutralised by today’s slide.

The current company will retain the core global snacking business and spin-off the North American cereal brands business the company made its name in as well as a smaller and newer division selling plant-based foods.

The move is intended to release more value for shareholders but the muted reaction to the announcement so far indicates investors and the wider market are not completely convinced. If the strategy delivers the shareholder value it is designed to the lack of early positive share price movement could represent an opportunity. But given the lukewarm early response to the move, could Kellogg’s have gotten it wrong?

How will Kellogg’s split the company?

The proposal put forward by Kellogg’s chief executive Steve Cahillane, who also chairs the board, is for the core company to consist of the snacks business which sells brands including Pringles crisps and is the current company’s most profitable and fastest-growing unit. It will also retain frozen breakfast products, mainly Pop-Tarts, sold in North America and international cereal and noodles brands.

For example, Kellogg’s Corn Flakes sold in the UK would still fall under the operations of the current company because it will operate internationally and cereal sales outside of North America don’t have the scale to justify setting up a new international sales and distribution operation. The global snacks business, together with international cereal brands and noodles sales, brought in $11.4 billion last year in net sales. That adds up to around 80% of total group turnover.

The North American cereals business, which sells the fluorescently multi-coloured Froot Loops brand among others, including healthier options like Special K, that are familiar staples across the USA and Canada, generated net sales of around $2.4 billion last year. It is expected to be spun out first, followed by the small but growing unit selling plant-based products like veggie burgers, mainly under the Morningstar Farms brand. It generates around $344 million in net sales.

Mr Cahillane said that Kellogg’s could potentially pursue acquisitions to beef up the plant-based foods unit ahead of it cutting the apron strings. Both spin-offs are expected to be completed by the end of next year with Kellogg’s shareholders awarded shares in the new companies relative to their stakes in the current combined entity.

The core snacks company will retain the Kellogg’s brand and license it to the cereal company, Cahillane said. All three companies will maintain a presence in Battle Creek, Michigan, where the company’s current headquarters are found but the global snacking business would have its head office in Chicago.

Why does Kellogg’s think splitting the company in three will release value for investors?

Unlike a number of recent cases where activist investors have pushed for businesses to be split up, like Nelson Peltz at London-listed Unilever, Mr Cahillane insists he has come under no activist pressure at Kellogg’s. He instead explains the move as founded on the reasoning that a share price that hasn’t moved significantly in over a decade needs new impetus. 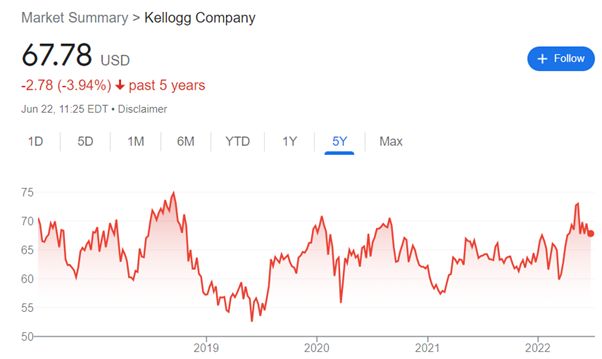 He told investors he feels both the North American cereals and plant-based units have seen their potential for growth held back by competing for capital with the more profitable and faster-growing snacks business. He believes the two smaller new businesses will be able to be more agile and aggressive in their pursuit of growth as stand-alone entities as well as benefitting from cost savings. Cost efficiencies are also usually the argument given for groups enlarging through acquisitions.

Cahillane said he and the company have been studying other recent and more historical company splits and spin-outs in its own industry and by companies such as GE, which launched a three-way split last year. A number of the world’s largest consumer goods companies have been streamlining their portfolios recently in a bid to break out of patterns of sluggish growth. 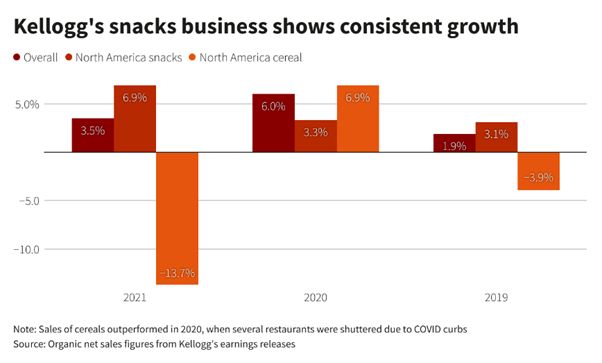 Will Kellogg’s decision to split the company turn out to be the right one?

It’s impossible to tell at this stage how the move will work out for current Kellogg’s shareholders and investors that buy stock in the company ahead of the split. A number of consumer goods companies, like Unilever, have pushed back against activist demands they hive off parts of the business or create spin-offs, arguing scale offers strength.

However, there is also a widely-held view that large conglomerates often trade at a discount that results in a valuation lower than “the sum of the parts” would combine to if run as separate businesses.

Quoted by Reuters, Randy Allen, a senior lecturer at Cornell College of business commented on the move:

“It is splitting now to take advantage of growth opportunities as economies slow and new growth is hard to find in all aspects of the business.Their snack business is more globally focused and has more growth potential.”

The Financial Times reports Consumer Edge Research analysts Jonathan Feeney and Riley McCarten raised their 12-month price target for Kellogg’s shares to $77 from $70. They currently trade at under $68, suggesting some reasonable upside.

However, overall, there isn’t a great deal of excitement about the announcement with analysts mainly adopting a wait-and-see stance. The core business will be expected to do better freed of its obligation to lower growth units but faces a longer term threat in the shape of regulatory and government pushback against unhealthy snacks high in sugar and fat content.

How the two new companies perform on their own will be down to a combination of broader market conditions over the next few years and the success of their expected acquisition strategies as they beef up. The smaller plant-based foods business should benefit from the meta-trend that is seeing demand for plant-based products grow quickly but also faces stiff competition.

There’s unlikely to be a stampede of investors looking to buy into Kellogg’s ahead of the spin-offs. But if they work out well, a sluggish share price ahead of the split could also represent an opportunity.