Why Is Deutsche Bank Cutting 18,000 Jobs And Does It Mean An Investment Opportunity?

Deutsche Bank’s announcement that it will cut 18,000 jobs, most of them from its global investment bank and many positions London-based, has sent shockwaves through the City and wider international finance world. For the individual Deutsche Bank employees, many of whom have already been told their positions are affected, the cull is undoubtedly a bitter pill to swallow.

The scale and immediate effect of the German investment bank’s restructuring is without precedent in the years since the financial crisis and many observers are taking it is a sign that European banks are raising the white flag in admission they have failed to compete with their Wall Street peers in trading global financial markets.

However, in the particular case of Deutsche Bank, the blood bath is the culmination of a decade over which it has struggled and failed to bounce back from the damage sustained during the international financial crisis of 2008.

So what exactly did go so wrong at one of Europe’s best known and biggest financial institutions. And is the current lowly share price a fair reflection of a bank set to spend years in the doldrums and possibly continue to struggle for survival? Or does it represent an opportunity for value hunting investors who get in at what should surely be a low point?

What Went Wrong At Deutsche Bank?

On a macro level, the strategic mistake that led Deutsche Bank into the position where it is felt it had to cut around a fifth of its workforce in one fell swoop, can be summed up as having attempted to go toe-to-toe with peers on Wall Street, and failing. But the position one of Europe’s largest financial institutions finds itself in is almost two decades in the making.

Deutsche Bank first dipped its toe into the investment banking space with the 1989 acquisition of Morgan Grenfell, a British merchant bank, for £950 million. At the time the bank was undergoing a period of aggressive expansion that culminated in it briefly taking the position of the world’s largest bank after it acquired Banker’s Trust, the USA’s eighth largest bank, for a little over £6 billion in 1999.

Initially, Deutsche Bank’s move into investment banking seemed to have been an astute one with impressive profits generated. However, when the financial crisis hit in 2007 it became apparent that those profits had come as a result of particularly aggressive trading strategy that had left Deutsche Bank heavily exposed to risky asset classes. The bank had been actively recommending the collateralised debt obligations (CDOs) to their clients.

CDOs are credited as “the engine that powered the mortgage supply chain” for subprime mortgages – the asset class that ultimately triggered the international financial crisis. The hit film The Big Short tells the story of how one Deutsche Bank trader, Greg Lippmann who is played by Ryan Gosling, recognised the imminent danger to the CDOs market, which over the years had become dominated by the highest risk categories of collateral. While the bank he worked for was promoting investment CDOs, Lippmann was advising his personal clients to short them. When the sub-prime mortgage crisis hit, CDOs became a toxic asset and tanked, netting those who had followed that advice, and Lippmann himself, millions.

The rest of Deutsche Bank’s clients were caught on the other side of the ‘Big Short’ and lost millions. While the bank itself avoided having to resort to a bailout, it saw most of its profits disappear overnight. Close to 70% had been either directly generated by the investment banking unit’s trading or related activities, which came to an abrupt halt.

Over the decade since the recovery from international financial crisis took hold, Deutsche Bank has suffered other blows to both its reputation and capital reserves. Involvement in Russian money laundering, a key role in the Libor (London Interbank Offered Rate) scandal that uncovered fixing of forex exchange rates, the violation of U.S. sanction that banned the movement of funds connected to the regimes and individuals from Iran and Syria and even spying on those outspoken against its dubious practises saw Deutsche Bank hit by a series of hefty fines. The Libor scandal alone cost £2 billion in fines.

In 2018, the appointment of Christian Sewing as the bank’s CEO marked the start of a definitive move away from investment banking for Deutsche Bank. Sewing’s background in the bank was in its private and commercial banking units as well as risk management. He has since embarked upon a process of dismantling the investment banking activities that the bank had previously spent three decades developing. He is overseeing a retreat back to Deutsche Bank’s roots in traditional business and personal lending in Germany. With investment banking activities no longer generating profits anyway, it is hoped that the $6 billion in savings that will result in cutting back most of activities will allow Deutsche Bank to return to profit – something that has now only been achieved in one of the past four years.

150 years after the bank was founded, it looks to be returning full circle to where it started.

As of July 2019, the Deutsche Bank share price is down over 105% from its May 2007 peak, shortly before the international financial crisis took hold. Does the current share price now represent an opportunity for long term investors interested in exposure to the traditional banking sector in Europe? Or is there a likelihood of further pain before Deutsche Bank’s market capitalisation returns to growth?

Despite the huge drop in the Deutsche Bank share price over the past 12 years, stock market analysts are not yet convinced it offers value at present levels. 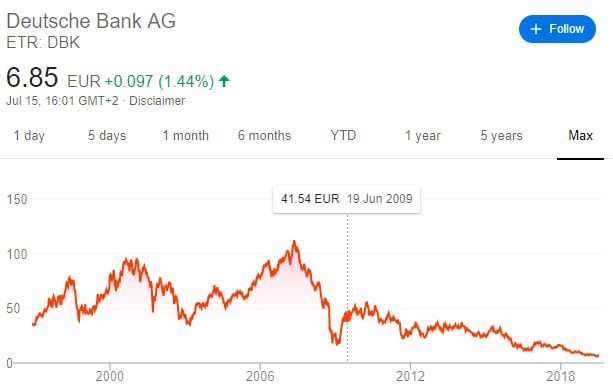 The bank’s management are forecasting a return to profit in 2020 but that relies on expectations for interest rate increases and gaining market share in its newly core business activities in traditional business and personal lending. Analysts are not convinced that optimism is well placed. For example, Stuart Graham, Autonomous Research’s head of banks has a €5.45 price target for the share price – over 20% down on its current level of €6.85.

The Wall Street Journal quotes Filippo Alloatti, senior credit analyst at Hermes Investment Management, who stated in an interview that investors doubt particular assumptions in the restructuring plan, including Deutsche Bank’s 2022 targets of an 8% return on tangible equity and €25 billion in revenues. The bank’s share price is also still under pressure from analyst downgrades. Of 19 analysts compiled by CNN, 10 recommend Deutsche Bank as a sell, 3 underperform, 7 hold and only 1 each offer an outperform and buy recommendation.

On the flipside, with Deutsche Bank’s shares currently valued at less than 0.2 times the lender’s tangible equity, if the bank does hit its 2020 results targets, it could make a 2.6% return on tangible equity next year only on the operations of its retail banking and asset management divisions. If that positive scenario plays out, Deutsche Bank could prove good value at the current share price.

For investors eyeing a ‘buy at the bottom’ moment to move for shares in the bank, exact timing might be tricky. As a long term investment it could well pay off if more nasty surprises don’t reveal themselves and the axing of the investment banking arm of the business is managed as tidily as realistically possible. But there is also a strong case for supposing holding off a little longer could mean an even better price is available.