The share price of Nike, the sportswear giant best known for its trainers, has fallen nearly 40% this year and the Eugene, Oregon-based company now trades at a p/e ratio of x28.76. Nike’s quality as a company and continued growth prospects mean it has been a popular stock with many analysts for some time now. And while the company will not be immune to the cost pressures and consumer belt tightening expected over coming months, it looks in a stronger position to maintain margins than most.

Most bets are off when it comes to the direction a given stock will take over the second half of this year. Even the strongest companies are being caught up in the broad market sell-off that has been rolling out since the beginning of the year. But for investors with a longer-term horizon, that shouldn’t put you off. And Nike should be one stock that sees its value bounce back strongly when market sentiment improves. 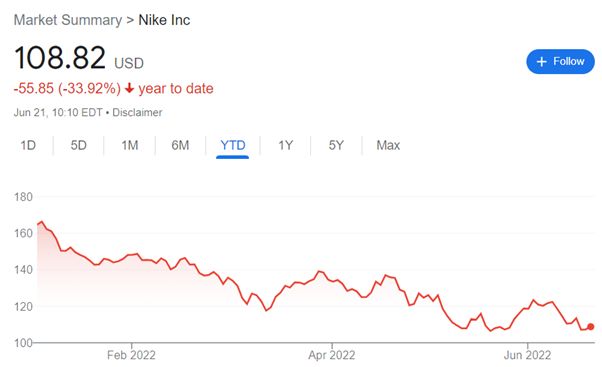 Let’s take a look at what Nike has going for it, and potential risks that could potentially derail a valuation recovery investors should be aware of.

Why is Nike such a high quality company now and have strong prospects for further growth?

Before we go into Nike’s strengths, the stock benefits from one external factor that could well offer British investors a bonus – it’s dollar-denominated. As long as financial markets remain in a downward slide, geopolitical tensions remain heightened, the global economy is struggling with inflation, and the Fed keeps raising interest rates faster than the Bank of England, the dollar is likely to remain strong against pound sterling and could well make further gains.

That means owning U.S. stocks, especially those that generate a large proportion of their overall revenues in U.S. dollars, provide a hedge against a vulnerable-looking pound. That could magnify any gains and soften any losses and is worth considering. Currency diversification and hedging should never be a deciding factor in the decision of whether to invest in a company’s shares. But it can be an attractive bonus.

As a stock, Nike’s biggest strength, especially during a period of economic pressure, is its profitability. Not only is the sportswear giant profitable but it is steadily improving its earnings per share (EPS). And impressively so. Over the past three years the company has grown EPS by an average of 14% per year which, if it can be sustained (even with a blip over the remainder of this year and possibly into next year) is a solid rate of growth.

The quality of a company’s growth is also extremely important and Nike also stacks up well here. Nike’s EBIT margins have improved from 11% to 15% and revenue keeps growing, which is a very positive indicator the company’s share price will recover from this year’s losses, which seem more as a result of the wider market environment than anything Nike has done wrong. Which is exactly the kind of company investors should be looking at over this period.

Individuals who currently have an active role in Nike’s management also own around 20% of the company and have been increasing their net ownership for some time, which is often a sign of high levels of insider confidence. It also adds additional motivation that other shareholders should benefit from.

How big a risk is inflation and the squeeze on disposable incomes to a maker of relatively pricey trainers and sportswear?

There has been a lot of recent talk of consumers tightening their belts amid an inflationary environment that has hit 9% in the UK and is not far behind in the USA. Nike’s trainers and sportswear might be popular but it also doesn’t come cheap. How big a risk is there that consumers will shun Nike products for cheaper alternatives while economic pressures on disposable income?

It’s clearly something that has concerned markets, with the Nike share price dropping from around $177.5 last November, a historic high, to below $110 now, despite the company’s fundamentals remaining strong over that period. Nike has also historically held up well during economic slowdowns and proven itself to be surprisingly resilient.

The fact that it is still paying out healthy dividends, the forward annual dividend yield is 1.14% and the board recently approved a quarterly cash dividend of $0.305 a share, displays confidence this downturn won’t prove an exception.

One important date coming up for the stock is June 27 when Nike is scheduled to publish its fourth-quarter results. Those are unlikely to be spectacular but as long as the company can demonstrate at least moderate growth and resilience amid the challenging economic conditions, markets are likely to reward it with some kind of recovery in valuation.

28 analysts covering Nike and polled by CNN have a median price target of $158 for the next 12 months and the most optimistic think its share price could reach as high as $195, which would represent an upside of 79%. Even the lowest estimate is for $115, which would return 5.5% against the current share price. The analysts also rate Nike as a firm Buy rating with only one analyst from 28 rating it as Underperform and none a Sell. 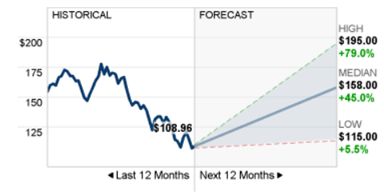 Over the past few years, Nike has been reducing its reliance on third-party retailers and investing heavily in direct sales, online and via its own stores. That’s helping it maintain and even improve margins and it’s a trend expected to continue, giving the company more and more pricing power.

In the short term, Nike’s share price has been roughly tracking the S&P 500 and hasn’t been especially volatile despite losses. That is further evidence that recent losses are a by-product of general market sentiment and less about fears over the company’s future performance and ability to ride out the current challenging conditions.

For investors looking for a solid long-term investment opportunity that offers dollar exposure and potentially strong upside and relatively limited-looking downside at today’s share price, Nike is certainly worth consideration.