It has been a good five years for Games Workshop, the company that sells the miniatures used in the Warhammer and Lord of the Rings fantasy role play board games. The Nottingham-based company’s share price has gained almost 550% since 2017 taking its valuation to £2.42 billion. 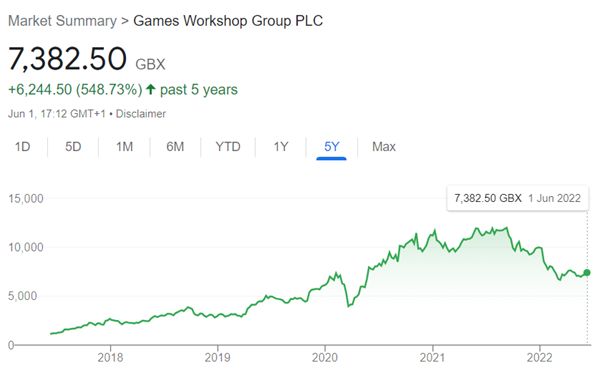 It hasn’t, however, been a good twelve months for Games Workshop with its valuation down 37% since last June. The company belongs to the broad category of “lockdown winners”, whose products and services enjoyed more demand than usual while consumers around the world were forced to spend more time at home for extended periods during the Covid-19 pandemic.

It’s perhaps unsurprising that a maker of board games saw its revenues boom during lockdown periods and then fail to sustain that growth as pandemic restrictions were wound down. But Games Workshop’s valuation also hasn’t done as badly as many other lockdown winners over the past twelve months. 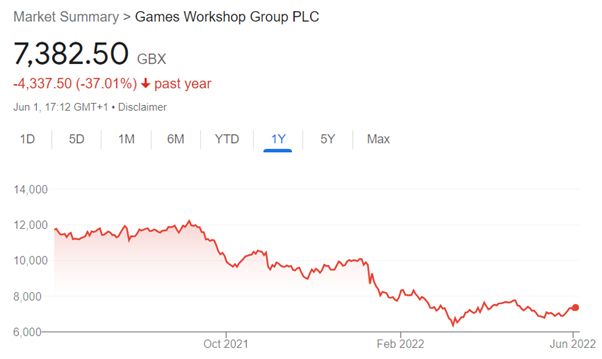 Peloton, whose upmarket exercise bikes and subscription-based fitness class streaming service were a big hit during the first lockdown period in 2020 has seen its share price shed almost 90% in the past twelve months. The video chat app Zoom quickly became a verb in 2020 as colleagues were forced into remote collaboration from varying home office arrangements and family and friends kept in touch online while unable to meet in person.

Zoom’s valuation has fallen by 68% since last June as meeting in person has become the norm again. The British e-commerce fast fashion company Boohoo, which did a roaring trade in loungewear and athleisure over the pandemic, has seen its share price fall 75% in twelve months.

Even Netflix is down 60% since last June after investors took fright at the streaming giant’s stalled growth over recent quarters.

Against the backdrop of these much steeper post-lockdown valuation drops of other pandemic winners, Games Workshop’s 37% hangover looks relatively mild. In fact, many analysts believe the drop in the company’s valuation has been just enough to mean its shares again look like they offer compelling value.

Especially if the company continues to grow as expected over future years. We’ll take a look at the main arguments in favour of exposure to the Games Workshop share price at its current level as well as highlight the risks that also exist.

Originally founded in 1975 as a maker of wooden boards for games including Backgammon and Go, by 1979 Games Workshop had pivoted and secured the official distribution rights to the fantasy role play board game Dungeons & Dragons and other products of the American games company TSR. It also started running games conventions in the late 1970s and opened its first retail shop in Hammersmith in 1978.

In 1979, the company funded Citadel Miniatures, a new company set up to manufacture miniatures of the kind used in Dungeons & Dragons, and later the Warhammer games. It had already been recently established but quickly ran into financial difficulties before being bailed out by Games Workshop, which subsequently took full ownership.

By the early 1980s, Games Workshop had released its first Warhammer game, the franchise that, through a combination of board games, miniatures and computer games licensing, now drives the majority of company revenues.

Globalisation and the growth of online communities over the past 2-3 decades has benefitted Games Workshop. By last year the company’s email list was generating 21.2 million cumulative opens and its intellectual property has morphed into hundreds of books, video games, animated films and a TV series.

It still makes its miniatures and board games in Nottingham but distributes them to a global fanbase across Europe, the Americas, Asia, Africa and Australia. It has a network of around 400 branded Games Workshop stores and an extensive e-commerce operation. 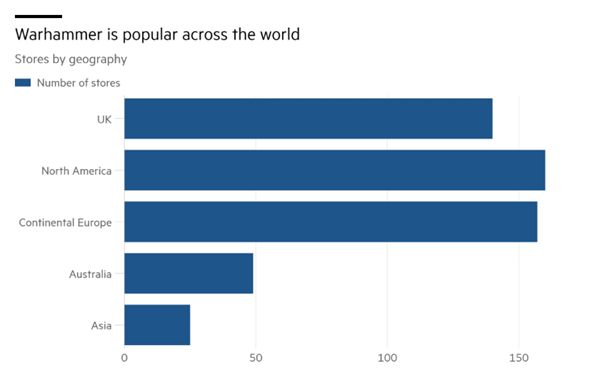 As a business, Games Workshop benefits from a highly engaged, sometimes close to fanatical, customer base of hobbyists. They regularly add to miniature collections as well as often buying specialists paints and other materials from the company in addition to the miniatures themselves.

Miniatures, board games and licensing for computer games, books, cards and other products and collectables all have strong margins. For the full financial year to May 2021, results for the year just concluded will be published this month, the company’s gross margin was 72.7% and return on equity 73.9%. Total sales brought in £353.2 million and showed 38% growth on pre-pandemic numbers.

Increased shipping costs over the past year have squeezed margins to an extent. Over the first half of the recently concluded financial year to November 2021, the gross margin dipped to 70% as a result of a £5.6 million rise in input and transport costs and a £3 million increase in staff costs.

Shipping costs contributed over half of the squeeze on gross margins and they are now starting to ease. Between the start of March and April container costs dropped 13% and are expected to continue to do so over coming months, which should help Games Workshop reclaim a good chunk of that drop in margin.

Games Workshop also offers solid income with dividend yields of around 3.4% and 3.5% over the past two financial years compared with an average 2.5% for FTSE 250 stocks. 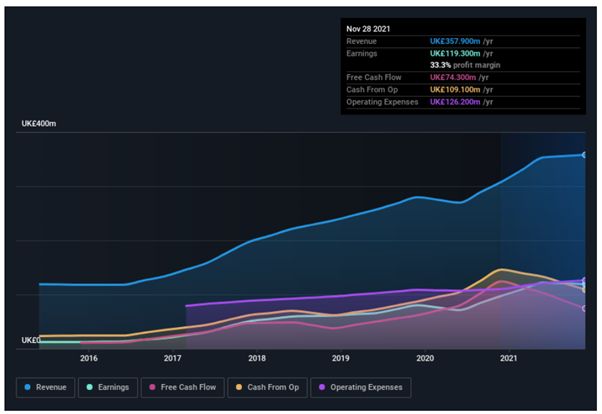 As well as plenty of remaining opportunity for Games Workshop to grow the fan base for its board games and miniatures, IP royalties are a source of major potential growth for the company and one it is starting to capitalise on more. Over the first half of the financial year to last November, Games Workshop’s income from royalties doubled to £20.1 million. As recently as 2015, the company generated just £1.5 million in royalties for the whole year.

Royalties should continue to grow with this year’s release of several video game titles including Total War: Warhammer 3 and Warhammer 40,000: Darktide and Lost Crusade. The former has already been positively received by computer gamers and critics. A game set in the new Games Workshop fantasy world Age of Sigmar is also in production. A trailer for the game has been viewed tens of millions of times and described by the company’s management as “the best fantasy launch to date by a considerable margin”.

Overall, the issues the company faced last year which dampened investor enthusiasm and saw the company’s share price drop seem to have little, or nothing, to do with demand for the company’s products and IP. That is steadily rising.

And the recent drop in the company’s valuation means it now looks pretty good value. Last May the Games Workshop share price was trading on a forward p/e of 30.6. It’s now just 20.3.

Risks to be aware of

Any company that sells products and services that can’t be considered consumer staples, and even those companies are feeling the impact of belt-tightening, has to be worried about the cost of living crisis expected to dominate international economies over coming months. Spending on miniatures for board games, new computer games and other hobby and leisure expenses could conceivably suffer as the disposable income of consumers drops.

However, hobbyists are generally a particularly loyal customer base and Games Workshop fans have historically proven themselves no exception. That’s evident in the company’s impressive margins. The company has brand strength and the pricing power that comes with that.

Consumers may well also see money spent on hobbies and entertainment to be enjoyed at home as an attractive compromise while reducing spending elsewhere, such as in sectors like leisure, hospitality and travel.

Another potential risk is the potential for counterfeiting of Games Workshop’s miniatures as 3D printing gets cheaper and more accessible, especially as the company’s products are relatively expensive. However, counterfeiting doesn’t so far seem like a major issue for the company that seems likely to hurt revenue growth badly over coming years, while something for investors to keep an eye on.

Games Workshop insiders are buying the stock themselves

Insider buying is often a valuable clue to a company’s future prospects. If its own management have enough faith to put their money into a company, it’s generally a good sign. Over the 12 months to May, while the company’s share price was declining, insiders bought up £395,000 of stock and sold none.

The biggest single purchase was that of CEO and executive director Kevin Rountree, who paid £117 a share for £161,000 of Games Workshop shares. He’s suffered a loss so far but is presumably confident that’s not a situation that will last long.

Of the 4 analysts covered by the Financial Times that offer 12 month price targets for the Games Workshop share price, two currently rate the stock a buy and 2 outperform. Their median estimate for 12,750.00 GBX represents 72.7% growth on the current share price.