Home Latest News Why the Price of Oil Is Rising, Will It Stay High and How Will It Affect Your Investments?
Latest News

Why the Price of Oil Is Rising, Will It Stay High and How Will It Affect Your Investments?

The price of a barrel of Brent crude may have eased back towards $80 a barrel from its early October high of over $86. A year ago the same barrel of oil cost around $55 and in February of this year $60. West Texas Intermediate (WTI), the U.S.-production oil benchmark has seen a similar pattern to its price trajectory, up above $70 a barrel from below $50 approximately 12 months ago.

It’s around four years since oil prices have been at current levels and many analysts believe they could rise some more before the end of the year with quite some time potentially passing before they ease back towards the $70 level which balances the interests of oil producers with the global economy.
Why have oil prices risen back towards levels that as little as 2 or 3 years ago many believed may never be seen again and how long might they stay above or around the $80 level? And with oil such an integral part of the global economy

As with any commodity, oil price dynamics are the result of a complex web of factors that boil down to the supply and demand balance and market sentiment around the future direction of that balance. Right now, supply is tighter than it has been in recent years for a handful of reasons and sentiment on how quickly that might change is mixed.

The main drivers for rising oil prices in 2018 have been:

The strongest influence on rising oil prices has been an agreement between OPEC and other major oil producers such as Russia to stick to output quotas below their actual capacity. In early 2016, Brent crude had dropped as low as $30 a barrel as a result of a supply overhang. The major oil producers of OPEC and partners such as Russia were seeing their economies hit and countries often running at a loss due to reliance on oil revenues which were significantly down at those low prices.

Somewhat ironically, the rock bottom oil price and supply overhang was the direct result of the same nations having previously decided to ramp up their output, flooding the market and driving prices down. That had been done in an attempt to strangle the competition of a growing U.S. shale oil industry, which needs higher oil prices to be profitable. However, OPEC and partners came to the conclusion that the pain being inflicted on their own balance sheets meant it was no longer worth going to war with U.S. shale producers and that prices had to rise. A ‘floor’ of around $70 a barrel was the target and strictly sticking to reduced output quotas until global inventories were depleted enough to achieve that the mechanism. 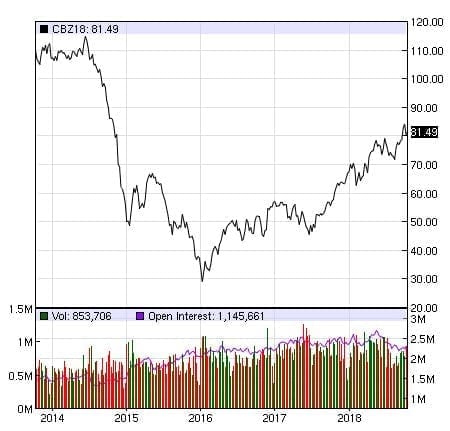 However, with prices rising above $80 since and geopolitical influences reducing supply elsewhere, OPEC and partners have come under pressure, particularly from the U.S., to open the taps wider again. An agreement of sorts has been reached for Saudi Arabia and Russia to increase output, bringing an early end to cuts that were planned to last until the end of the year. However, with not all OPEC members keen on compromise, the exact increase that will result has not been published. Analysts estimate the rise in daily output to be somewhere around the 600,000 to 800,000 barrels a day level but with output elsewhere down and demand rising, supply is likely to remain tight for some time.

Venezuela hosts as much as 20% of the world’s known global oil reserves, which means it has more than even Saudi Arabia, though it is more expensive to extract. However, a chaotic political situation and deep structural problems within the state-owned and run oil company PDVSA means the South American country’s output has dropped far even further below its capacity this year, hurting global output.

After Russia and Canada, Iran has the fourth largest oil reserves. The Trump administration’s withdrawal from the Iran nuclear treaty and re-imposing economic sanctions against the regime, the central pillar of which is banning its oil exports, could remove as much as 2 million barrels a day from global supply. The USA wants OPEC to compensate this by members increasing their own output but is meeting resistance.

The USA and China Trade War

Despite pushing hard for lower oil prices, U.S. policy has also become a major driver of higher oil prices in 2018. The growing tensions between the USA and China on trade, which is manifesting itself in an escalating tit-for-tat imposition on new tariffs, could eventually mean China slapping new import tariffs on U.S.-produced WTI oil. This prospect has led to refiners and traders starting to avoid buying American oil, putting additional pressure on other, already stretched, suppliers.

As emerging market economies grow, particularly those of India and China, so does their demand for oil. Global growth rates have been recently revised down by OPEC but it still estimates another 1.36 million barrels a day will be required in 2019. That’s almost 75% of Iran’s supply, which will likely largely be cut off from the market and will again turn the screw tighter unless other major suppliers significantly up their output.

Very recently it seemed that oil at $100 a barrel, a level last seen in late 2014, would never be possible again. However, some analysts now believe that could be possible before the end of this year. In September, an ANZ Bank note to investors highlighted this scenario as a realistic possibility. With Iran sanctions and Venezuelan ineptitude seemingly set to be fixtures over coming months and OPEC and Russia not hugely incentivised to do the USA a favour by increasing output, it seems unlikely that the supply gap will be closed over the coming three to six months. That means prices are expected to hold at over $75 a barrel and could go significantly higher.
How Will High Oil Prices in 2018 and 2019 Affect My Investment Portfolio?

Despite the rising share of renewable energy sources, the world economy still very much relies on oil to power it. Plastics and many rubbers are also made from oil as are asphalt roads and even some more surprising products such as nail polish, hand lotions and many synthetic materials used in clothes. As such, the price of oil has a huge impact on the bottom line of many of the companies those investing online own shares in, either directly or through funds.

High oil prices are a threat to global growth as higher fuel and material prices hit companies and when households need to spend more on petrol and heating, they cut back on consumer discretionary spending. Of course, there are also companies, notably oil producers, that also stand to benefit from higher oil prices. There are also some less obvious benefits investors can take advantage of. So what should those investing online be aware of in an environment of high oil prices?

Companies Most Likely to Be Negatively Affected By High Oil Prices

Fuel prices are a major overhead for transport and logistics companies so airlines, couriers, trucking companies, bus companies etc. all see the ‘fuel’ figure on the expenses side of their balance sheets rise with oil prices. This can either be passed on to the end consumer or absorbed at the expense of profit margins. Usually a combination of the two.

Industrials that rely on oil power or oil-based products can be expected to be hit in a similar way as can manufacturers of consumer goods with a significant oil-based component such as plastics.

Generally, it makes sense to comb through investment holdings and highlight companies for whom high oil prices will eat significantly into margins by increasing overheads.

Companies Most Likely to Benefit From High Oil Prices

Particularly over the earlier period of higher oil prices, energy stocks can be expected to receive a boost. Companies such as BP and Shell can sell their product at higher margins, boosting profits. In the U.S.A, the S&P 500’s energy sector is expected to see a 42% rise in 2018 profits compared to an average of 12% across all of the companies that make up the index.

Also, historical evidence suggests that oil prices rising can boost equities, as long as the gains are not too high. $70 a barrel would be expected to be more positive for indices such as the FTSE 100 and S&P 500 than a drop back to the $40 or even $30 level of a few years ago. This is because oil prices at a reasonable level, not too high and not too low, is more positive to big oil companies than it harms companies in other sectors that buy oil and oil-based products. So if prices can be held below $80, and ideally soften towards $70, then there shouldn’t be a great deal for investors to be worried about, at least with regards the price of oil.

Companies that have little reliance on oil prices, such as many technology companies, might also benefit indirectly through investors avoiding exposure to companies which are themselves particularly exposed to rising oil prices. Companies not exposed to oil prices, or not significantly, could be the beneficiaries of this investment capital looking for a home.

Oil price cycles are just one of the factors that investors have to be aware of and while they are a major influence on the profitability of some companies, there should not be an overreaction. Adjustments can be made to reduce a portfolio’s weighting towards the sectors that will most suffer from higher oil prices, hedging by allocating that capital to energy companies or other sectors that benefit.

However, if a stock is high quality it also wont in most cases make sense to sell in reaction to oil prices rising above desirable levels for a few months. Any hit to the stock’s value will eventually be made up when prices come back down if oil price overheads are the only change to the company’s profitability.

In conclusion, it is wise to keep an eye on the current situation and potentially make some adjustments if prices seem likely to head towards $90 or $100 and remain there for any length of time. However, don’t overdo it and at up to $80 a barrel it probably only makes sense to adjust only the stocks under the most direct threat to higher oil prices.

The Nasdaq dropped 1.9%, while the yield on 10-year Treasury notes dropped to 1.557%... END_OF_DOCUMENT_TOKEN_TO_BE_REPLACED

The dollar’s received a further boost as the Nasdaq dropped more than 2%, the... END_OF_DOCUMENT_TOKEN_TO_BE_REPLACED