Why Were Private Investment Markets So Enthusiastic About Uber?

In the run up to Uber’s official announcement that the market-leading ride-hailing app company with lofty ambitions in the driverless vehicles market would go public through an IPO, observer opinion was that its target valuation would be between $100 million and $120 million. While acknowledged as theoretically expensive for a company that generated 2018 revenues of $11.3 billion for a loss of $3 billion (Uber has lost an accumulative $8 billion in total), most analysts didn’t seem to believe an IPO market capitalisation of $100 billion plus was unattainable.

After all, Uber was darling of Silicon Valley. Private investors, including many of the highest profile and successful venture capital funds in the world, had considered Uber’s potential as justifying over $22 billion in investment over 18 rounds. The company’s last pre-IPO valuation was at over $70 billion. If the cream of those who hand out the world’s private investment capital were happy to throw money at Uber at that level of valuation, why wouldn’t a public listing of $100 billion or more be attainable?

Uber’s IPO Has Proven A Flop

But in the end it wasn’t. The final pricing of the IPO was at $45 a share, valuing the company at $75.46 billion. Uber’s IPO was still one of the biggest in history but in the end it gave the feeling of an opportunity lost at 38% less than what the company was estimated as potentially being worth back in October 2018.

And mirroring Lyft, Uber’s smaller rival that had its own IPO in late March and has since seen its share price lose over 25%, things have gone downhill since the stock debuted on the NYSE on May 10th. The Uber share price lost over 7% on its first day of open trading, opening at $41.57 and dropping to $37.10 – less than its last private valuation. Approaching the end of the month, Uber’s share price is still around the level at which it opened trading and over $3 down on what IPO investors paid for it. The current valuation is around that at which private investors were buying in at 3 years ago when Uber’s revenues were almost $7.5 billion less.

It could be argued there have been mitigating circumstances. Stock markets have generally taken a negative turn on U.S.-Sinai trade tensions ratcheting up again. Lyft’s post-IPO flop probably also didn’t help. But, regardless, it’s difficult to build an argument to the affect that Uber’s IPO hasn’t been a disappointment. Beyond Meat, the meat alternative start-up, debuted a week before Uber to massive success. Its IPO was priced at $25 a share and as now at over $79, having peaked at over $89 on Friday May 17th. It has been the most successful IPO in two decades, undermining any potential defence by Uber that its IPO’s timing was bad luck and has hindered its initial performance.

Why Are Public Capital Markets Less Enthralled By Uber Than Private Venture Capital?

The big question is why public markets are judging Uber so differently to how venture capital has done. It’s easy to say that on the basis of the company’s revenues and losses a valuation of $100 billion or more made absolutely no sense. But revenues were even lower and losses being racked up while the company was private. Ostensibly, nothing has changed. Except that the company now has a ‘runway’ of around $8 billion in cashed raised through its IPO that it can use to expand further internationally, consolidating its market leading position and use to invest in driverless robo-taxi fleets. At least, that is the plan outlined during the IPO.

So what’s gone wrong? Why do public markets not have the same faith as venture capital’s scions? Why has Uber’s IPO seen up to $50 billion been left on the table? Are public markets too short-sighted to see the company’s long term potential and be willing to invest in it? Or have Silicon Valley and the international investors that flock to invest in its golden child start-ups lost sight of reality and are giving companies private valuations that are simply completely illogical?

Why Did Private Investors Value Uber So Highly?

Perhaps the first question to ask is that with the less obvious answer. Why did private markets throw so much money at Uber? There appears to be a number of key factors that led to Uber’s success in Silicon Valley. The start-up ticked a lot of boxes venture capital looks for.

Founders With A Track Record

Uber’s two co-founders, deposed former-CEO Travis Kalanick and Garrett Camp, had both already founded and successfully exited start-ups prior to Uber. VCs were ready to invest in the pair, almost regardless of what their new company was. While it sounds like an urban legend, it apparently genuinely happened that when early investor First Round Capital was approached by Camp Rob Hayes, one of the VCs partners, responded that he would invest. He followed up the offer with one question – “what is UberCab”? UberCab was Uber’s original name before it was shortened to simply ‘Uber’.

Another winning angle for Uber was that the VCs the start-up was trying to woo liked the service – it was something they would themselves use. Many who didn’t regularly use traditional black cabs decided they would use an Uber cab. PayPal co-founder and VC investor Peter Thiel famously commented of Silicon Valley VCs:

Uber Made A Big Market a LOT More Efficient

Technology start-ups are supposed to ‘disrupt’ the markets they are targeting. Uber did so in a big way by introducing huge efficiencies into an outdated private transport sector. Its algorithms, ‘gig economy’ and ‘marketplace’ model meant no dispatcher salaries, no fixed driver costs, no infrastructure required and a better deal for the end consumer. From a business model point of view Uber’s was in most ways incomparably more efficient than traditional, legacy models of taxi companies.

As well as making business sense Uber matched Silicon Valley ideals perfectly. The business is all about individualism and ‘pure’ capitalism. It challenged lawmakers and regulators with the support of its armies of enthusiastic users who would kick up a fuss when cities or states responded to the traditional taxi lobby and tried to restrict its march. It cut out the middleman and the inconvenience of ‘inefficiencies’ such as employee rights and vetting and the rest.

And the company, almost by accident, further seduced private venture capital with the promise of an even bigger future market. One that had the potential to be one of the biggest new markets of all time – driverless cars.

Uber’s early years and pitches didn’t include any reference to autonomous vehicles technology. However, at a certain point someone, somewhere within the organisation joined the dots and realised that when driverless vehicles technology did become viable, Uber’s service would become even more efficient and hugely more profitable. Under its current model Uber gets a cut of every ride booked through its app with no overheads for drivers, organisation or vehicles.

In the driverless future it has to invest in vehicles, or a combination of those it owns and those ‘rented’ to it when not in use of private owners. But the company then keeps the whole fare. And with costs so low, people would hail driverless Uber vehicles like they use the bus, tram or metro today. By adding this golden carrot ahead of a mix VC investors already liked, Uber managed to raise private capital at an unprecedented rate.

Why Are Public Markets More Sceptical?

The broader base of investors represented by public markets are less ideological than those of Silicon Valley. That’s not to say they won’t take a position on potential and a concept – Tesla attests to that. But on its own, those qualities are not enough. Tesla’s recent travails also attests to that.

If Uber had gone to IPO at an earlier stage, as Tesla did, public markets would probably have given it more breathing space and patience than currently being shown for Uber. But the company is already huge and has significant revenues. But is burning cash at an increasing rate while its growth slows.

Between ride-hailing, food delivery and freight, Uber boasts it has a total addressable global market worth $12 trillion, of which it has still only captured 1%. That $12 trillion figure represents 15% of 2017’s global GDP of $80 trillion. Leaving aside the fact that claiming 15% of global GDP could pass through its apps is clearly ludicrous, given the size of its claimable market Uber’s growth rates should be phenomenal. Instead, the company’s revenue growth rate plummeted from 106% in 2017 to 42% in 2018. And that doesn’t account for incentives offered to drivers which, when included, cuts 2017 growth further – to 39%. 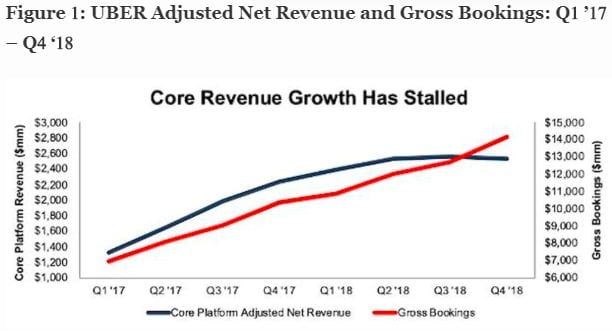 Uber is also loosing market share in key geographies – most noticeably its home market of the USA. Data firm Second Measure estimates its share of the U.S. market fell from 82% in early 2017 to 71% by the end of last year. Uber has pulled out of Russia, China and much of Southeast Asia in recent years.

And it’s not only in ride-hailing where problems are mounting. In the USA UberEats is losing market share to a rival – DoorDash. Amazon has recently invested in UK food delivery unicorn Deliveroo, which plans an aggressive expansion into the USA.

It’s starting to become clear that Uber has little in the way of clear competitive advantages over rivals. It’s only succeeding by throwing cash at drivers and incentivising other stakeholders. Stock market investors are clearly, and probably rightfully, concerned about what happens when that is no longer financially viable. The brand alone has not shown the potential to hold its own. When subsidies stop won’t competitors offering exactly the same service just come back? In the USA, around 70% of Uber riders also work through the Lyft app.

The Driverless Dream Looks Far Away

Uber’s golden ticket with VC investors, a future market for driverless fleets where Uber is a major player, is also being viewed sceptically by stock market investors. They counter the enthusiasm for what will undoubtedly be a huge market with the practicality it is, as a mass market, still probably 10 years away. In the meanwhile, does Uber keep burning cash to hold onto a declining market share in ride-hailing and food and freight deliveries?

And what about the huge capital expenditure that establishing a big enough fleet to compete with car manufacturers and richer tech giants with the same ambition will involve? Where does that cash come from? Uber’s IPO nest egg will, on current evidence, have long gone before the company needs to find the money for that.

As a company, Uber still has huge potential. But at this stage it’s not clear that its early success in wooing private VC investment at huge valuations won’t ultimately become a millstone around the company’s neck that, as a now public company, won’t start to do more harm than good. Uber’s history has been one of charging forward aggressively and dealing with the consequences of that approach later. That’s come off for it, to some extent. But has also led to problems. There’s no guarantee that at some point the balance between the pros and cons of Uber’s approach won’t tip towards the negative. At least, that’s currently what stock market investors appear to be telling its board and the VCs that invested so heavily in it.