Will Elon Musk & Tesla Have The Last Laugh By Wiping Out Their Shorters?

It’s amusing to wonder just how pleased Tesla’s Elon Musk is over the prospect of the damage that the company’s share price surge of early February is doing to its numerous ‘shorters’. Is he calmly sanguine about reports some of the traders he views as financial market sharks could even be wiped out? After all, they are all playing the same larger stock markets game. Or is he rubbing his hands together in glee? Delighting at the comeuppance for those who doubted him?

Tesla chief Elon Musk has long raged against the short sellers stalking the electric car manufacturer’s share price. He is not against the market mechanism of shorting per se, where traders take a position on a company’s share price falling because they believe it to be overvalued. He even accepts that investors have been exceedingly patient with Tesla, backing it through years of losses while it positioned itself to dominate a new market for all electric vehicles.

But he also believes that short sellers often don’t play fairly and actively stalk certain companies, with Tesla their favourite target in recent years. It has been the most shorted company in history. Among the comments Musk has directed at Tesla’s shorters have been:

“Short sellers are desperately pushing a narrative that will possibly result in Tesla’s destruction.”

“They’re jerks who want us to die”.

In that context, it might be suspected there is at least a little glee at the pain Tesla’s share price performance is now inflicting on shorters. The company’s share price has rocket by 20% and 14% over the past two days respectively, plunging some of the hedge funds with large short positions against it to the brink of financial disaster. Including the gains this week, Tesla’s share price has more than doubled over the early part of 2020 and is 400% up on where it languished in June. 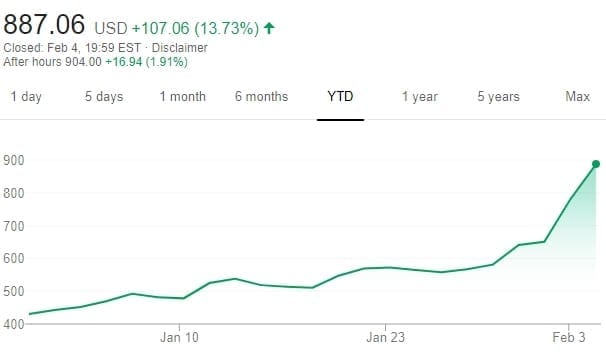 Tesla’s surge has come on the back of newly encouraging financial results, deliveries of new Tesla models picking up and jump in production capacity. News this week that Tesla’s battery joint venture with Japan’s Panasonic has moved into the black was enough for investors to ignore the other news that Saudi Arabia’s sovereign PIF fund sold off its significant stake in the company over the fourth quarter. Last week’s surprise announcement of a Q4 profit of $105 million has also played its part.

By mid-morning yesterday, Tesla short-sellers had sustained additional losses of $2.7 billion, adding to the $3.2bn they lost on Monday, which, according to market data firm S3 Partners, became the largest one-day loss for Tesla shorts. Total paper losses on Tesla short positions now stand at $11.6 billion since the start of the year.

Quoted in the Financial Times, Wedbush Securities analyst Dan Ives believes Tesla’s share price could yet gain another $150 to $1000 if growing Chinese demand for electrical vehicles can be leveraged in the U.S. company’s favour:

“While Tesla shares remain on a historic rally post-earnings, the bull party will probably continue in the near term”.

But some shorters remain convinced that their bets against Tesla will come good if they hold on. Andrew Left, founder of Citron Research and a former shorter of Tesla whose positions are respected and followed remarked:

“I said I would never short the stock again, but now it’s not even a stock, it’s a casino situation.”

Mark Spiegel of Stanphyl Capital, a long term shorter of Tesla stock that has taken heavy losses this year on Tesla’s share price, wiping 9% off the value of its fund, has trimmed his positions but is still confident the worm will turn:

“This is completely uncharted territory. At some point one of these tops will be the blow off top and then the bubble will collapse.”

With a market capitalisation of now just shy of $160 billion, Tesla is now the second most valuable auto manufacturer in the world, behind only Toyota. The company is currently worth more than the combined value of General Motors, Ford and Fiat Chrysler, the USA’s three big traditional car makers.

Short sellers profit by borrowing shares in a company they are confident will drop in value. They sell them on the open market in the hope of rebuying them for less before returning them to their owners, earning the difference in price minus a small ‘loan fee’ paid to the original holder.

But Tesla’s share price has, instead, risen spectacularly in recent months. That means short sellers would have to pay much more to buy back the shares sold, to return them to the original owners they were borrowed from. Some shorters have already closed some of their short positions to guard against losses reaching unserviceable levels. This pushes up demand for Tesla shares further, again boosting the share price and potentially forcing more shorters into cutting losses. This circle, either ‘vicious’ or ‘virtuous’, depending on whether looked at from the point of view of shorters or Tesla, is referred to as a ‘short squeeze’.

Tesla’s shorters must either now, if they have the liquidity to do so, hold on in the hope what is happening proves to be a bubble that eventually pops. If they are wrong and losses continue to pile up, they could be in serious trouble. The other option is to cut losses while they can, further fuelling the short squeeze for those still holding on.

Elon Musk and Tesla have, at least for now, turned the tables on their detractors and will be enjoying the moment.

The Japanese Stock Market Hasn’t Hit A Peak In 30 Years And Japanese Investors Are Pessimistic. But Should You Buy?

The IAG share price fell by another 4.5% after the British Airways owner offered... END_OF_DOCUMENT_TOKEN_TO_BE_REPLACED