Will the Stock Market Bubble Finally Burst in 2018? Arguments for and Against

Almost the entirety of 2017 to date, and we only have a few weeks left, has been a positive story for equities markets. And 2016 was even better. In the UK, the FTSE 100 finished the first week of January 2016 at 5912.44 and the first week of December at 7300.49. That’s a 20% gain in less than two years. Admittedly, the vast majority of that was added in 2016, with 2017 so far a little over 2 percent up on the end of last year. Nonetheless, even holding on to those gains in the face of Brexit headwinds can be considered a very positive trend. 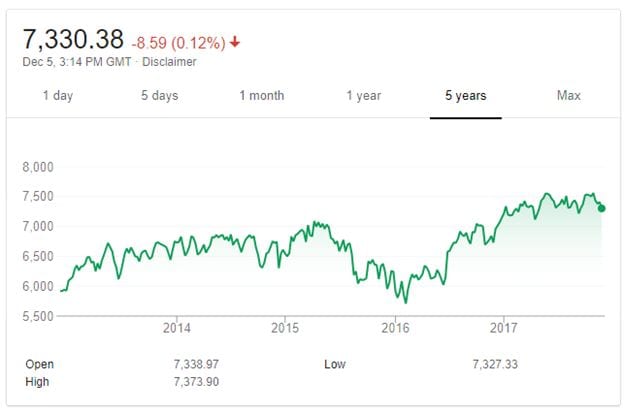 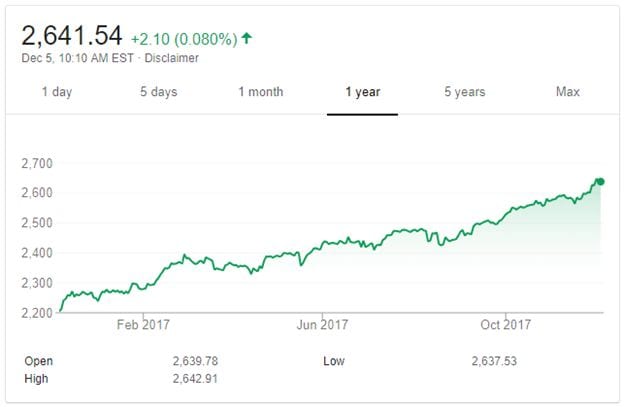 The S&P 500 had set almost 60 record closes over the course of 2017 by the end of November and keeps going. By the time 54 record closes was reached last month, it was already the best run in more than two decades. 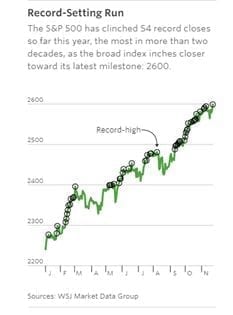 As we enter the season in which analysts traditionally offer their opinion on the direction markets will take over the next calendar year, opinion is split. Over the course of 2017 there has been disagreement between analysts. One camp is convinced we are in the midst of an equities bubble that will inevitably and imminently pop. The other argues fundamentals underpin the new reality of higher prices.

It is often more informative to watch the flow of money rather than the flow of words to get a better understanding of what the reality is. There is evidence to suggest that many money managers may have changed their minds on how close a market correction is over the course of 2017. Much of defensive re-positioning seen by money managers earlier in the year has been rolled back in recent months. A recent Merrill Lynch survey of global money managers with over £400 billion of assets under management highlighted that cash holdings are, at just 4.4%, actually at their lowest level in over 4 years.

That may well be the result of clients pressurising money managers to keep capital invested while markets are still showing strong gains, rather than necessarily the first instinct of the managers. However, it’s indicative that optimism is still the dominant emotion driving prices ever upwards.

Returning to analyst forecasts for 2018. There is little evidence to suggest these short to medium-term predictions are particularly useful. The depth and liquidity of securities markets mean reliable forecasts are not possible. However, it is possible to efficiently manage risk. As such, it is both interesting and useful to explore the arguments being put forward by the correction and continuing bull market camps. Let’s summarise some of the most popular arguments for and against the equities bull market continuing over the course of next year taking a look at the UK, US and global equities markets:

Arguments Against an Equities Correction During 2018

FTSE 100 close to fair value despite also being close to its record high: the good old fashioned P/E ratio is still a good way to look at value in equities but its shortfall is that it doesn’t take the cyclical nature of earnings. High earnings in a cyclical up-period can make the P/E ratio look lower than it should and low earnings at the bottom of a cycle can look high.

Over in the U.S., the S&P 500’s CAPE ratio is a little more expensive, around 13% above long term averages. However, that’s still not a great deal. Proposed corporate tax cuts currently being thrashed out in the U.S.A could also have a significant impact and shift the long term CAPE ratio higher over the next few years, leaving further room for growth. 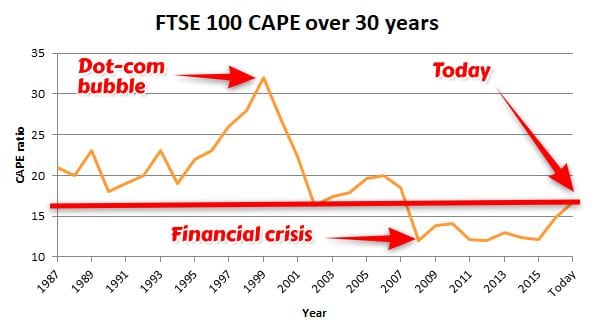 U.S. corporate earnings and global economic growth will support 2018 gains: huge gains in U.S. equities markets are supported by rocketing earnings and low interest rates. Risk premiums are stable and corporate tax cuts will boost 2018 earnings again. That’s the position of most investment banks on the 2018 U.S. equities market. Their analysts are convinced that recent gains, and future gains are solidly based on growing revenues and fundamentals stack up. 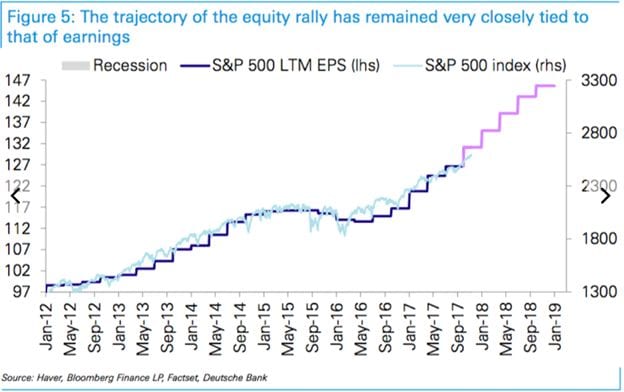 Arguments For an Equities Correction During 2018

U.S. equities vulnerable to any shock to financial systems: this argument takes the line that while earnings are high, underpinning gains for U.S. equities markets, that means the risk of a major event changing is currently high. This could quickly lead to markets losing confidence and a major correction. Earnings well above historical averages means they are vulnerable.

Over reliance on growth and tech stocks: market bears point to the fact that much of the recent gains in major U.S. equities indices have been driven by the tech giants and the wider class of ‘growth’ stocks generally. Value multiples for the likes of Alphabet (Google’s owner), Facebook, Apple and Amazon are much higher than for other companies. If growth rates in these companies start to plateaux, or they are forced to pay more tax in countries where international earnings are made, the market could start to lose faith in those multiples. A correction in the value of the tech giants could then have a significant impact, and knock-on impact on U.S. equities, which would roll over to the UK, then Europe and, to a lesser extent, Asia.

Conclusion
The conclusion has to be that 2018 will likely be another good year for equities, both in the UK (probably better than 2017) and in the U.S. (not quite as strong as 2017), all being equal. If Brexit talks make progress in the UK and if Trump’s corporate tax cuts go through in the U.S., and there is no major shock to financial markets, all will be well. But that’s a big ‘if’. It also has to be accepted that if anything goes wrong, geopolitically or in financial markets, fundamentals could quickly go downhill. If that happens a bear sentiment wouldn’t be long in taking hold. Which is the central problem with forecasts: they rest on factors that are impossible to accurately predict.

As always, investors would be wise to manage risk and avoid over-exuberance.

UK Investment Markets to Get a Boost from Brexit Talks Breakthrough?

With bond yields at historical lows, they are not a particularly attractive investment for... END_OF_DOCUMENT_TOKEN_TO_BE_REPLACED

Most of the world’s investment capital is held in the stock of companies known... END_OF_DOCUMENT_TOKEN_TO_BE_REPLACED

It’s not so long ago millennials and Gen Z were being criticised for spending... END_OF_DOCUMENT_TOKEN_TO_BE_REPLACED