Britain, like most of the world, has traditionally been a country of milk and dairy lovers. The dairy industry is also a major part of the economy with over 12,000 dairy farms in the UK. But times are changing and while many still love to feast on milk, creams, yoghurts, cheeses and other daily products an increasing portion of the population do not.

Findings published by the UK’s Agriculture and Horticulture Development Board (AHDB) in 2020 showed the per capita consumption of milk in the country has dropped by almost 50% since 1975. In the 70s the average Brit consumed an average of 2.7 litres of milk a week which has since fallen to 1.4 litres.

However, the AHDB also found the amount of milk going into other dairy products, especially cheese, has increased. 1.09 billion litres over the past decade. The study also found a huge majority of UK households, 98.5%, still buy milk.

Despite the fact most of us do still drink milk and consume dairy products, Jim Mellon, the billionaire investor behind  Agronomics, a London-listed venture capital fund investing in environmentally friendly meat and dairy alternatives, recently made the bold statement:

“The dairy industry, as it is today, will be gone within ten years.”

Why is the dairy industry in trouble?

The UK’s 12,000 dairy farms may sound like a lot but there were 28,000 in 2000. More than half have disappeared in the space of a little over two decades. Those that do remain can only survive with heavy government subsidies, suggesting the economics of the sector struggle to stack up.

The USA’s two biggest milk producers, Dean Foods and Borden Dairy, recently filed for bankruptcy. The independent think tank RethinkX, which focuses on how disruptive innovations will impact sectors, has a similar opinion to Agronomics’s Mellon. The think tank has said it believes advances in food science means human-engineered microbes will be used to produce some dairy products, like whey and the protein casein within the next several years.

As a result, RethinkX also sees the writing on the wall for the dairy industry, writing:

“Only a small percentage of ingredients need to be replaced for an entire product to be disrupted, triggering the collapse of an entire market. Barring massive government bailouts, we expect widespread bankruptcies throughout the 2020s and the industry to collapse before 2030.”

Another major factor in the dairy industry’s decline is the growing popularity of plant-based dairy alternatives. In the USA, plant-based milk alternatives such as oat, soy and nut milks now account for 15% of the market. Oatly UK General Manager, Ishen Paran, says that 32% of UK households now buy dairy-free milk alternatives, even if many also still buy dairy milk. UK sales increased by 28.3% in 2019. 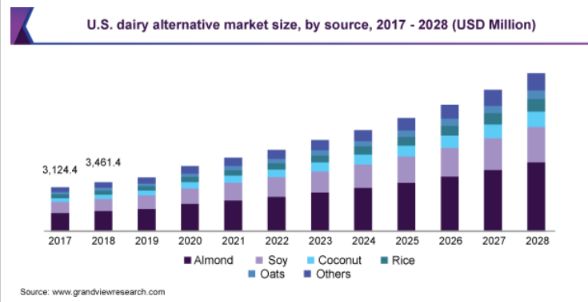 The primary motivation for consumers to buy plant-based alternatives used to be, says Oatly’s Paran, based on dietary or health concerns. That’s evolved over recent years and consumers now mostly opt for non-dairy milks due to environmental concerns and worries over animal welfare.

Will milk alternatives all but replace traditional dairy products over the next decade or two?

If an even heavily subsidised dairy industry is struggling for economic viability in developed economies like the UK and USA and non-dairy alternatives are steadily, and quickly, increasing their market share, might the dairy industry as we know it genuinely disappear? Judith Bryans, chief executive of industry trade body Dairy UK, is confident it won’t.

She points out sales of milk and other dairy products like cheese and yoghurt boomed over the pandemic when people spent most of their time at home. She also questions just how healthy many ‘alt-milk’ products really are:

“Alternative products are not a replacement for the nutrition offered by dairy. Often these products are highly processed, and have to be fortified to offer anything by way of nutrition.”

How the dairy industry could change as it is ‘disrupted’

Big investors such as Silicon Valley venture capital funds now look at alternative foods, such as dairy and meat alternatives, as almost an extension of the tech sector. Food science and agritech is big business, attracting $30.5 billion in investment in 2020, according to the annual Agfunder report. That was the highest total on record and represented 34.5% year-on-year growth on 2019.

Among the biggest investment rounds of the year including $330 million raised by Perfect Day in a Series C round. The start-up uses biotechnology to replicate real dairy proteins and has partnered with San Francisco-based  Smitten to launch non-animal whey protein ice cream with cream cheese planned for the near future.

“You need about six pounds of food and up to 1,000 gallons of water to make one gallon of milk. If you look at it from an engineering perspective, that system is extremely inefficient.”

The “inefficiency” of meat and dairy cow agriculture means the sector contributes 41% of all the emissions produced by agriculture, which itself accounts for 15% of all greenhouse gasses. Which means over 6% of harmful emissions produced globally are a direct result of dairy and beef farming.

Ultimately, the truth probably lies somewhere in the middle. There is always likely to be demand for traditional dairy products. However, as food science advances and synthetically produced dairy alternatives start to lead to products that taste more like the real thing, adding to the market share lost to plant-based alternatives, the traditional dairy industry could well simply become uncompetitive.

‘Real’ milk and cheese could quite plausibly become luxury products rather than everyday staples with a decade or two. For many, that will be a victory for the environment. Others will inevitably see it as an abomination.

Exactly how the changes will unfold and at what pace is, as always, difficult to foresee. But that the dairy industry will undergo a tumultuous change over coming years and that plant-based and lab-cultivated alternatives will grow their market share looks to be as close to a certainty as it gets.