Since going public a little over a year ago in May 2019, Uber has had a hard time convincing investors of its prospects for long-term profitability. Despite the IPO pricing Uber’s shares at $45 each, valuing the company at $82.4 billion rather than the originally hoped for $120, the ride-hailing app company’s share price nosedived after its stock started to trade on the New York Stock Exchange. Towards the end of 2019, Uber shares were worth around half of what IPO investors had paid for them.

It’s not as though Uber didn’t even state clearly in its IPO the company had no clear path to profitability. It did. Uber’s Tts S-1 filing openly declared that there was a chance they’d never earn a profit. And while financial markets weren’t ready to assign Uber quite the same valuation as private equity had while it was still a private company, a public valuation of north of $80 billion was still a watershed moment for a start-up a million miles away from profitability.

Uber’s share price dive post-IPO was also considered a watershed moment. Market observers declared it a clear sign ‘peak tech start-up’ had been reached and passed. The fact WeWork never made it to IPO in the end because investors started asking the kinds of questions they hadn’t of Uber, was, think many, a direct consequence of the Uber IPO.

But before the Covid-19 pandemic swept the world in early spring, Uber’s share price was at least starting to show shoots of recovery. Over February it twice inched back above the $40 level. The company was still haemorrhaging cash but had tightened its belt, realising that public markets were demanding signs of quick progress towards at least the hope of profitability being achieved within the foreseeable future. 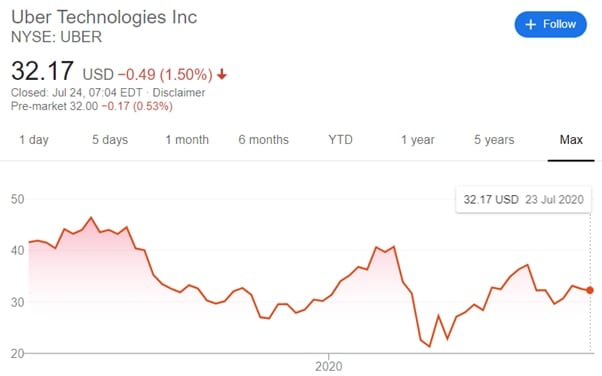 Then Covid-19 struck, lockdowns were introduced around the world and people largely stopped travelling for a few months. When they had to, vehicles that unknown numbers of other passengers had been getting in and out of all day were not, understandably, a popular choice.

In April, Uber Rides bookings, the company’s core business, plunged by 80%. Food delivery through Uber Eats increased in popularity but takeaway delivery margins are even tighter than ride-hailing margins. A boost in income for Uber Eats was never going to get anywhere near compensating for the core Rides unit’s turnover falling off a cliff.

Uber reacted quickly to cut costs by as much as practically possible. The company shut 45 offices, cutting 7500 jobs internationally. It also froze or shut down more speculative expenses such as the huge investment that had been allocated to the company’s pursuit of driverless technology and its artificial intelligence lab.

Passenger numbers have recovered slightly, with some locations bouncing back better than others. But in June they were still 70% down on 2019 levels across the company. An article published in the Washington Post in late May, highlights the extent of the challenge Uber faces over coming months and possibly even years:

‘Sabrina Wang, a D.C. commuter who used to take Uber or Lyft multiple times per week, says she can no longer fathom sharing a ride pool.

“I think it’s unimaginable at this point,” said Wang, who works in health policy but is enrolling in medical school this fall. “You don’t know how many rides that person accepted, you don’t know how often they cleaned the services … you don’t have control over your environment.”

But the 22-year-old does order meals from delivery services such as Uber Eats every couple weeks, taking care to transfer the food to her own containers and reheat it, in accordance with guidance for takeout orders. It’s “not a perfect system,” she said, but “it alleviates most of our worries.”’

The account by a stereotypical Uber client outlines the extent of the problem Uber faces. Even when lockdowns do end, as they are beginning to, things are not going back to how they were before. There will be, as we are constantly reminded “a new normal”.

For investors in Uber, the big question has to be if the new normal has a place for a service like ride sharing?

While there were some positives in comparison to previous months, it’s not as though Uber entered the Covid-19 pandemic in a rosy position. Legal questions around the company’s business model have plagued it and remain largely unanswered. The company operated across more than 700 cities on six continents but has had big issues in some of its most important markets.

Among those is London, where there has been question marks over its continued presence since 2017, when Transport for London revoked its license to operate. The grounds were that the company was not “fit and proper”.

A probationary license was secured but in November 2019 TfL announced that follow a review that showed “a pattern” of serious passenger safety failures. The biggest concern was a flaw in the platform’s technology that let unregistered and approved drivers switch in their photo to the account of approved drivers and drive users in their place. It was found that at least 43 drivers without appropriate approvals had been operating in London.

An appeal was launched and Uber continues to operate on its probationary license until the hearing in September, after it was moved back from July. The company is optimistic Uber will get its London license back. But if it doesn’t, it will be a serious blow. One that might take some recovering from.

“I am certainly confident we are on the right track. TfL has been very positive about the things we have done.”

A facial recognition system has been introduced to close the problematic loophole and it is also being used to verify drivers are wearing masks at all times. Mr Heywood comments:

“It is so critical that a rider knows a driver is who they claim to be. We had very positive feedback from TfL with respect to facial verification. Hopefully we are on the right track. We wait to see what happens in September.”

Another hurdle to be cleared in the UK is an upcoming Supreme Court ruling on a case brought by 19 Uber drivers in 2016. The court will decide, following several appeals that have dragged the final decision out, if drivers should be treated as employees rather than self-employed. That would entitle them to rights such as the minimum wage, holiday and sick pay.

Mr Heywood has avoided being drawn on what defeat in these cases would mean for Uber, but says he is “confident things will work out from a licensing and legal perspective. We have gone through difficult times, but we have managed the crisis as well as we possibly could have.”

Can Uber Eats Save Uber?

Uber Rides could bounce back from the Covid-19 pandemic but it would be a brave investor who would bet on it. Uber also seems to understand the future of its, until now, core business is uncertain. It’s pivoting to focus on Uber Eats, which has benefitted from lockdown. It’s invested in growing its market share of food delivery through the $2.65 billion all-stock acquisition of rival Postmates. The longer-term plan is to become the “Amazon of micromobility”, facilitating on-demand delivery of everything and anything it makes sense to deliver or transport.

But hoping Uber Eats offers the company a bright future seems a long shot. Swallowing up Postmates offers it some economies of scale and greater market share in the USA but it is still behind rivals DashDoor and Grubhub, which was recently acquired by JustEat Takeaway and is now part of the biggest food delivery group in the world.

Fighting for market share in a sector with famously wafer-thin margins will be far from easy and it will be expensive. Some analysts believe acquiring Postmates, which has an 8% share of the U.S. market, only increases Uber’s exposure to a market it is already struggling in.

For many investors, a driverless vehicles future was where the big hope for Uber lay. That was the sector that, if it cracked it, opened the door to serious riches. But Uber has poured billions into trying to develop the driverless technology it hoped would replace troublesome freelance drivers.

If Uber can afford to keep chasing that dream now seems under serious question. As Mr Heywood says:

“We have had to take some very difficult decisions and take a broad look at what shape and size of the organisation we need in light of Covid and an uncertain recovery.”

Even if Uber does survive, there has to be a big question over whether it will ever now take a position among the tech giants of Wall Street, where it has always seen its eventual place. For investors, the current Uber share price of just over $30 might well be as good as it gets.