The William Hill share price has gained close to 4% today on weekend reports the bookmaking giant, a constituent of the FTSE 250, is on the verge of announcing a media partnership deal in the USA. Since the 2018 decision of the US supreme court to overturn the Professional and Amateur Sports Protection Act, individual states have been allowed to choose whether to relax their laws on sports betting.

Many already have or are in the process of doing so, opening up a new market that analysts at Morgan Stanley believe will be worth up to $7 billion a year by 2025. And with bookies from the UK and Ireland far more experienced in making money from online gambling than their counterparts in the USA, deals are being done at a rapid pace. 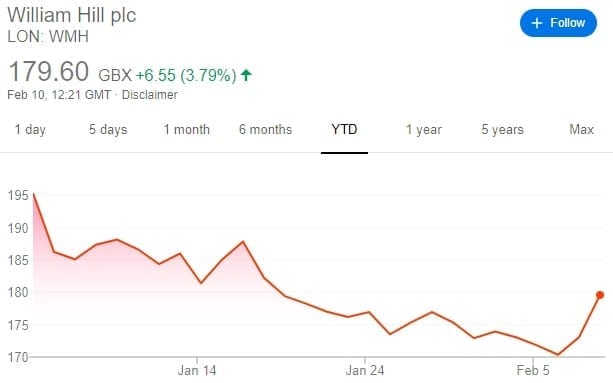 William Hill hasn’t been slow to try to take advantage of the opportunity. The company last year entered into an agreement with Eldorado Resorts which saw the casino operator take a 20% stake in its U.S. subsidiary. In return for the equity stake, William Hill has started offering sports betting in Eldorado’s bricks-and-mortars casinos in permitted states as well as being able to take advantage of Eldorado’s state licenses to offer online sports betting.

However, the missing part of the jigsaw so far has been striking the kind of media partnership that can drive users to William Hill’s new U.S. online sports betting platforms. That failure has seen it fall behind London-listed peers such as Ladbrokes Coral-owner GVC, which has signed a media deal with Yahoo Sports and Paddy Power/Betfair-owner Flutter and their pending partnership with Fox Sports.

But if weekend reports are accurate, William Hill is now on the verge of reaching a similar media partnership agreement with CBS Sports, which attracts 42 million unique visitors a month. The two were previously involved in talks, which failed to result in a deal but they have been revived and sources quoted in the Sunday Times say negotiations have now reached their final stage. William Hill itself declined to comment but an announcement is expected imminently.

Investment analysts Jefferies now believe that William Hill’s share price could more than double to 400p a share if it takes even a 10% market share of a sector it believes will be worth $5 billion in coming years. If the more optimistic $7 billion forecast by Morgan Stanley proves to be accurate, the upside could be even more.

William Hill’s share price peaked in early 2007 at around 650p a share before a crash catalysed by the international financial crisis saw it plummet to around 160p by late 2008. The stock has traded at sub 200p levels since October 2018.

Tesla shares swing above $800 again before giving up gains

FCA Piles Pressure On Google To Cut Out...

Does The Spectacular Snowflake IPO Have Shades Of...

About 3,500 U.S. companies have filed lawsuits in the U.S. Court of International Trade... END_OF_DOCUMENT_TOKEN_TO_BE_REPLACED