The Wise share price has leapt 12% today bringing the cross-border payments fintech’s drop in valuation over the year-to-date down to a little under 4%. The gains came after the company raised its full-year revenue growth guidance and despite it also reporting a 6% dip in first-half profits, which came in at £18.2 million.

Today’s announcement of its first-half results was Wise’s first formal reporting of its figures since becoming a public company after its July IPO. The fintech attributed the drop in profits to heavy investment in new employees, products and geographical expansion. 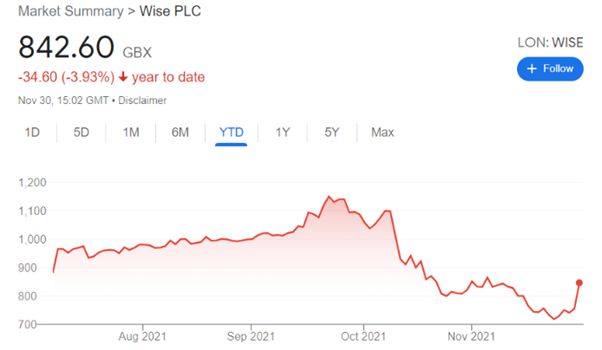 Judging by today’s share price gains investors accepted the need for investment to continue to fuel growth and are encouraged by revenue growth guidance for the full year as expected to reach between 25% and 29%. Previous guidance issued relatively recently in October predicted growth in the low to mid-twenties as a percentage.

After a good start to life as a listed company, Wise’s valuation peaked at £11.50-a-share in late September, the past two months saw a 37.5% drop to a low of £7.18 on November 23 and started this week at £7.55. Today’s gains take the Wise share price up to £8.39. At least some of the slump from late September came as a result of the bad publicity of co-founder and chief executive Kristo Käärmann being publicly declared a deliberate tax defaulter by HM Revenue & Customs. The company also recently rebranded as Wise from its original TransferWise.

The fintech’s July listing was seen as a boost for the London Stock Exchange which has been making a concerted effort to attract more high growth technology companies with many UK-founded companies preferring Wall Street for a public listing.

Like e-commerce giants THG, which also listed in London this year, Wise has a dual-class share structure that favours its founders by attaching greater voting rights to their shares compared to those held by investors. That makes the company is ineligible for membership for FTSE 100 membership despite being valuable enough to qualify.

THG founder Matt Moulding has already announced he will give up his extra voting rights next year by converting his holding into ordinary shares. However, he has also expressed regret at not having gone public in the USA in the first place, criticising City investors for failing to understand high growth digital business models.

But its co-founder’s tax issues aside, Wise now appears to be adapting to public life with revenues up 33% for the half-year to September, coming in at £256.3 million. That was generated by processing £34.4 billion in cross-border payments, a 44% rise on the year before.

Käärmann said Wise has managed to cut prices for customers while processing payments even faster than previously. There was also an announcement of a new Assets service, which will let UK customers park spare cash in an account linked to the stock market.

Chief financial officer Matt Briers commented on the improvement to revenue guidance with:

“We are seeing strong and steady volume growth from our business and personal customers.”

He added that without the £7.5-8 million cost of the listing, profits would also have been up for the period.