Chinese authorities instigating a broadening series of crackdowns across multiple sectors, the latest a ruling banning many companies in the country’s $100 billion tutoring sector from either pursuing profits or going public, has depressed valuations over recent months. The latest surprise by regulators means tutoring of pupils of primary and middle school age can only be conducted on a “non-profit” basis and has been banned entirely over the summer period which is usually the industry’s busiest.

It’s being seen as a response to parents snubbing cheap government-sponsored day programmes focused on extra-curricular activities like sports lessons and arts and crafts in favour of expensive private options with an academic focus.

Publicly listed tutoring groups like TAL Education Group and New Oriental Education & Technology Group have seen their market capitalisations plunge by up to 70% in a matter of days.

The latest blow to investors in Chinese stocks, both domestic and international, comes after months of regulatory scrutiny for tech stocks, listed at home and abroad, and attempts to clip the wings of the largest. Property companies have also been hammered with the sector falling to 10-year lows in June after the government introduced new rules limiting the amount of leverage property companies can be exposed to.

A buoyant Chinese property market that bounced back strongly from last year’s Covid-impacted malaise is now in the unusual position of seeing sales boom while the valuations of the companies raking in the cash are badly depressed.

Hundreds of millions of dollars in valuation fell away from China’s domestic stock markets in July. Hong Kong’s Hang Seng Tech Index, launched just over a year ago to capture the performance of Hong Kong’s growing cluster of tech shares, ended the month down 17%.

Chinese companies listed in the USA have also seen investors take fright at the regulatory warpath Beijing seems to be on. An estimated $400 billion has been wiped off their value since the start of July and $559 billion over the past five months.

The situation is leaving fund managers with exposure to China caught in the horns of a dilemma. On the one hand, Chinese equities suddenly look attractively cheap and could represent a good buying opportunity. On the other hand, a reassessment of the risks involved in investing in Chinese companies is taking place.

“I don’t think any of us have any idea about what the plan of the political setup is. I have no interest in playing that game. I don’t have any relevant insight. I would just be betting.”

Just a month ago, in early July, the Nasdaq Golden Dragon China Index, which tracks 98 of the largest Chinese companies listed in the USA, was trading at a similar multiple of estimated future earnings as the Dow Jones Internet index. Losses over the past month mean the Golden Dragon index now trades at a multiple of around 33 times estimated future earnings, to the DJ Internet Index’s x40 multiple.

The Chinese companies, many of them tech companies but not only, suddenly look much better value than their U.S.-owned peers. 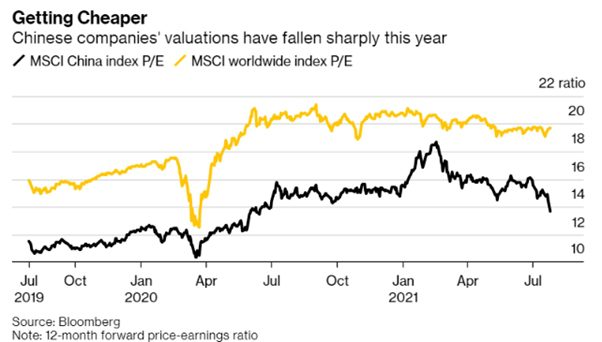 But is it a genuine discount and, therefore, buying opportunity? Or are the depressed valuations of Chinese companies simply an accurate reflection of political risk? 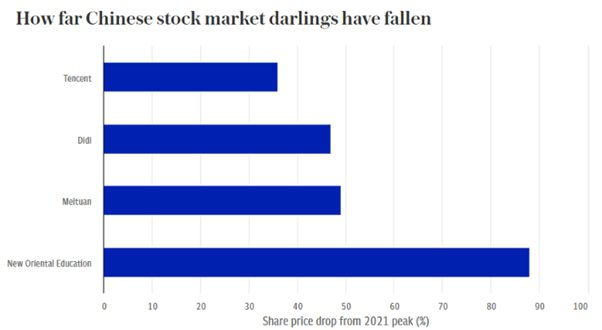 Another near-term threat to Chinese equities is that what had until recently looked like a V-shaped economic bounce back from the pandemic looks like it is slowing down. First quarter GDP growth of 18.3% fell to 7.9% in the second quarter and the People’s Bank of China has lowered the capital reserves required of Chinese banks in a perceived attempt to encourage lending. China’s authorities feeling the need to add more stimulus to the economy is being seen in some quarters as a sign of concern at faltering growth.

As the first economy to start to recover from the pandemic, Chinese growth could also start to slow before it does in the USA and other western markets.

The main arguments against taking a risk on cheap looking Chinese equities can be summarised as:

All of the above doesn’t mean Chinese equities don’t potentially represent an attractive opportunity at current price multiples. But chasing the upside if things go well does mean investors expose themselves to a higher chance of an investment going wrong.

Some investors will be happy to take on the risk profile currently represented by Chinese equities as part of a diversified portfolio. For those who are interested in China exposure, and are looking for sectors most likely to benefit from the Chinese governments’ current policies, and least likely to suffer from political interference, clean energy and electric vehicles look interesting.

Diversification of risk away from just a few companies can also be achieved via index trackers and ETFs tracking Chinese benchmark indices and sectors. Some UK-based examples include:

However, these are only a few examples of the growing range of China-focused funds, trackers and ETFs. Do your research on exposure and costs but there is something for almost anyone willing to take risk on Chinese equities returning to something approaching recent multiples before losses over the past few months.